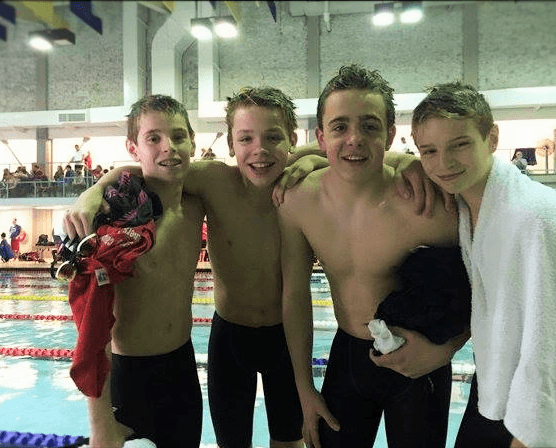 They began their recent surge on June 28th, taking the short course 400 medley relay record off the books at a time trial at their home pool in Guelph, Ontario. The quartet of Marcus Beckstead-Holman, Russell Burton, William Beckstead-Holman and Colin Campbell combined for a time of 4:26.97, shattering the previous record of 4:29.54 set by the UBC Dolphins Swim Club way back in 2003.

That gave them all five short course records, and they set off on their journey to get all five long course records that same night. With the Etobicoke Swim Club hosting a time trial prior to the Ontario Provinicial Championships, the boys were set to take aim at the long course 800 free relay record, a relay not contested at the Provincials in that age category. It was close, but they got it. By just one tenth of a second they eclipsed the University of Calgary Swim Club’s previous mark of 9:03.72 in 9:03.62 off the strength of a fast leg from Russell Burton (2:12.55) swimming second. The previous record was set just last year.

They then competed at the Ontario LC Summer Championships in Etobicoke from June 30th-July 3rd with the aim of attaining the final two long course medley relay records and having all ten to themselves.

With no 11-12 age category in the relay events, the boys competed an age group up in the 200 medley relay to start the meet off, taking the record by over a second in 2:04.32 to finish 7th in the 13-14 category. The previous record was set by Pacific Coast Swimming last year in 2:05.34.

On the final day of the meet they strived for their tenth and final record, and it wasn’t close. They obliterated the previous mark of 4:36.88 with a time of 4:33.83 to again finish 7th in an age group above.

Burton also picked up three medals individually at the Ontario Championships, claiming silver in the 200 breast, 200 IM, and 400 IM.

Burton, Campbell, and the Beckstead-Holman brothers are the four who combined for all ten records. Tristan Jankovics was the backstroker on the team that originally set the short course 200 medley record, but that record was re-broken by the aforementioned four.

What’s more amazing than the fact they hold all ten records is the fact they did it in just 91 days, or exactly three months time.

Take a look at the complete list of records broken below: