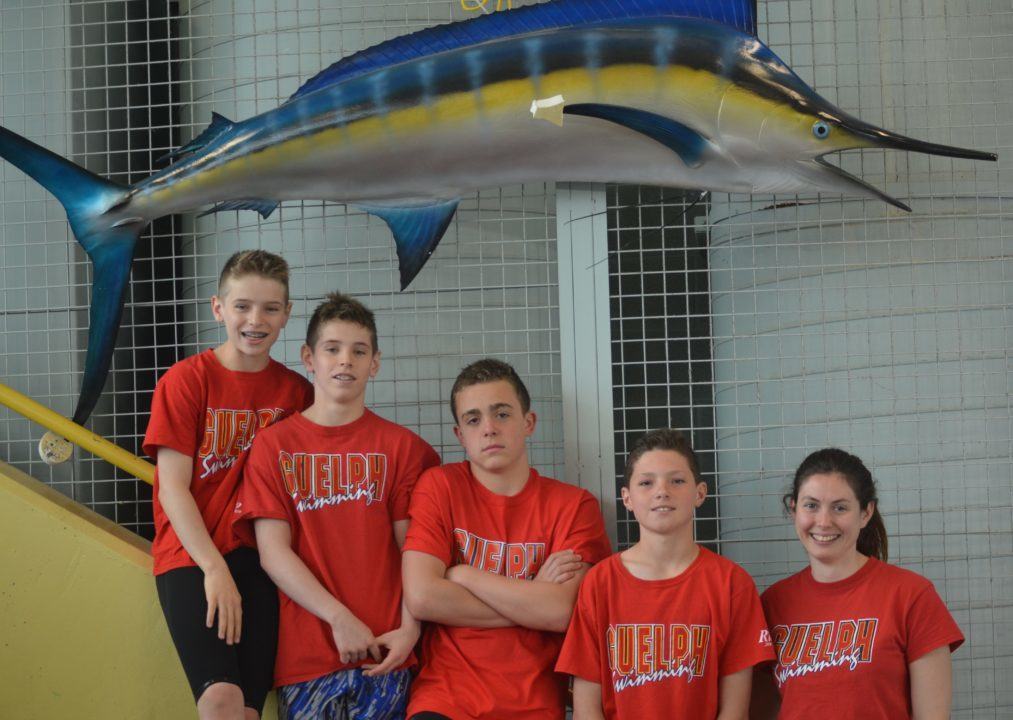 The Guelph Marlin Aquatic Club has rewroten the 11-12 Canadian Age Group relay records over the past few months. Archive photo via Laura McPhie

Over the last few months the Guelph Marlin Aquatic Club’s 11-12 boys have done some serious damage on the Canadian National Age Group records, as they now hold four of the five short course records and two long course records with much of the LC season still to come.

The quartet of Russell Burton, Colin Campbell, Marcus Beckstead-Holman and William Beckstead-Holman have combined to set five freestyle relay records, starting in early April. At the Victor Davis Memorial Meet the four of them combined for a time of 4:06.19 in the long course 400 free relay to smash the previous record of 4:10.79 set by the Regina Optimist Dolphin Swim Club all the way back in 1988. They then set their second long course record at the Ontario Team Championships in Windsor at the end of April, clocking 1:52.36 in the 200 free relay to take down the previous record of 1:53.00 set by the Richmond Rapids in 2015.

They started off their short course record run at a home meet in mid-April, breaking the 800 free relay record of 8:58.73 by nearly 11 seconds in a blistering 8:47.86. The previous record belonged to the Etobicoke Swim Club set in 2013. They also got their first medley relay record, clocking 2:03.43 while adding a new member to the squad, Tristan Jankovics. He swam backstroke, with Burton on breaststroke and the Beckstead-Holman brothers on butterfly and freestyle. That time broke the Toronto Swim Club’s record of 2:03.53 set in 2015.

They then competed at the Ontario Summer Festival meet in Etobicoke this past weekend, which is a provincial level meet for swimmers 13 and under. They set three new short course relay records, claiming the 200 free, 400 free and re-breaking the 200 medley. In both the 200 and 400 free relays they took down two nine year-old records held by the Toronto Swim Club from way back in March of 2007. The 200 free relay saw them inch out the record by less than second, going 1:49.27 to take down the previous record of 1:50.11. The 400 free record was more substantial, erasing nearly three and a half seconds off the old record of 4:02.97 down to 3:59.50. The same medley relay lineup bested their previous record of 2:03.43 down to 2:02.84 as well.

The three relays won two silver medals and a bronze, whilst competing against an open field that included many 13 year-olds. They missed the 400 medley relay record held by the UBC Dolphins Swim Club (4:29.54 from 2013) by about a second and a half and finished 4th in that race.

Their coach Laura McPhie (pictured) has confirmed the group will push hard at their final meet of the season, the Ontario Long Course Provincial Championships, for more records.

“We are definitely making a run at all the LC times at Provincials. At this point we are pretty confident BUT as this past weekend reminded us – we are working with 12 year old boys and sometimes the math makes sense but people have off swims.”

The Provincial Championships are set to take place from June 30th-July 3rd in Etobicoke.

I’m lucky to coach this group of kids.

Nice work! Great to see success stories like this in Canadian swimming