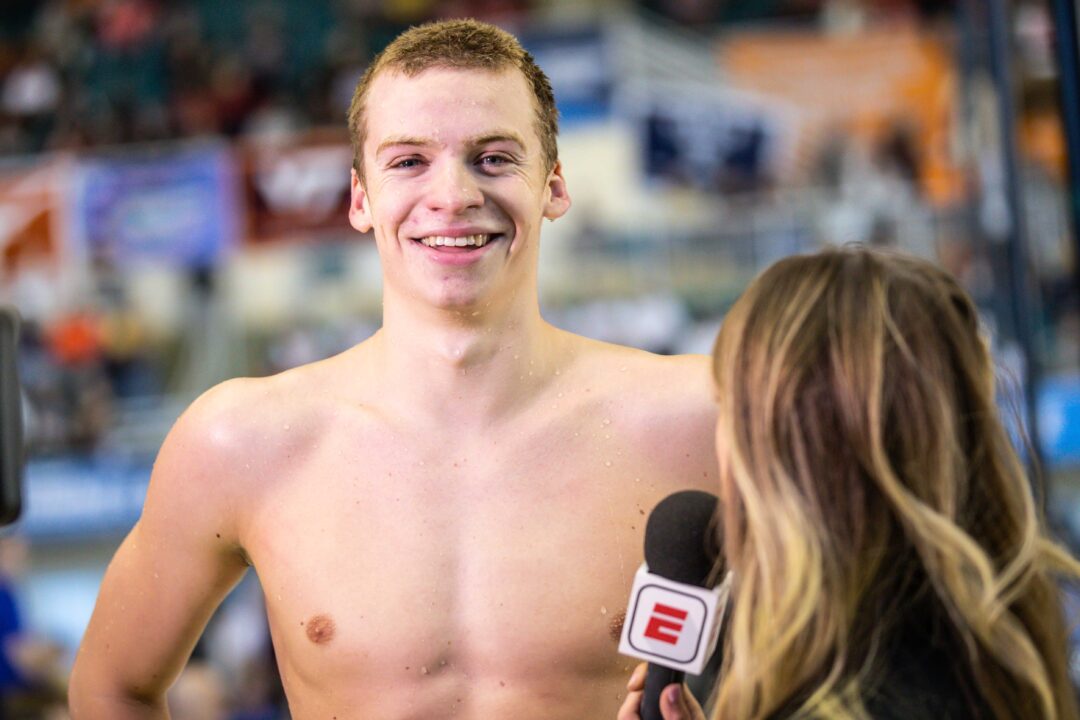 PAC-12 rivals Arizona State and Southern California competed against each other at the USC home pool in Los Angeles on Friday. The ASU men came back from last year’s close loss to get a decisive win, scoring 185 points to the Trojans’ 115. On the women’s side, USC won again this year, but the Sun Devils tightened the gap a bit, with the final score being 180 – 103.

ASU sophomore and two-time NCAA champion Leon Marchand has returned this season with a string of individual wins. Marchand has accumulated ten wins this season after taking first place in three events against USC. He swam season-best times in the 200 breast (1:53.34) and 200 IM (1:42.55). In the 100 breast, Marchand went a 52.75, which is his fastest time in a dual meet, but his best time this season was posted at the ASU intrasquad meet (52.00).

Dolan and McCusker were also part of the winning 200 medley relay (seniors John Heaphy and Grant House made up the “A” team).

The 1:42.55 200IM time by Leon Marchand is actually the top time so far this year. This is because the time listed for a U of A swimmer was not done in a standard 200 IM format!

so that means he easily has a new NCAA record in his pocket for the 2 IM at NCAAs. No big deal.

Leon Marchand is more influential and newsworthy than the entire USC womens’ team.

Is it just me, or do Leon and Townley kinda look alike?

Maybe that’s why you sit in your seat and they sit in theirs lolol.

It is true. ASU women got slammed by USC and UCLA. He should get credit for both teams!

It’s not bad coaching it’s bad recruiting. I think the women swim fine for their ability

Isn’t recruiting at least 75% of coaching in college?

8
0
Reply
Time For Barta To Go
Reply to  Ghost

In all college sports, not just swimming, a case could be made that because the coaching acumen is all (relatively) close, the difference usually comes down talent/personnel …. watching the swim recruiting commitments, clearly the rich are still getting richer.

OCCASIONALLY someone gets “coached up” and exceeds trajectory/projections, but rarely. Even rarer are moves up the NCAA ladder, without a great recruiting class.