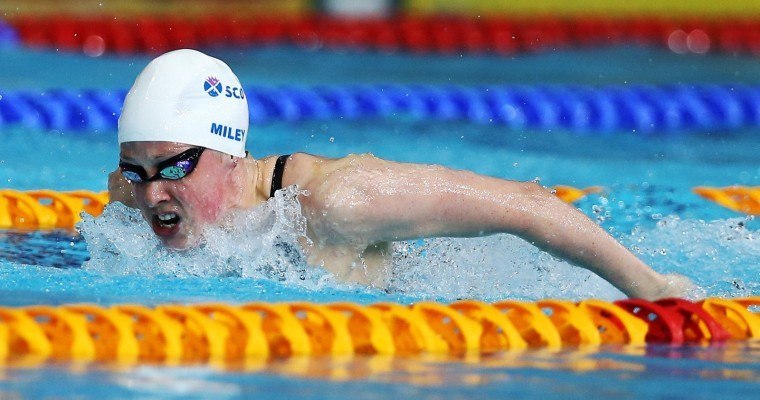 Opening night of the Arena Pro Swim Series at Orlando tees up 10 different events, including two relays added to the lineup of the prelims session.

The battle for the series points lead is in full swing on the men’s side: Tyler Clary led the tour after its first stop in Minneapolis last November, but lost the lead to defending series champ Conor Dwyer. Clary is the top seed in tonight’s 400 IM with up to 5 points on the line (he trails by 6 at the moment). Meanwhile Dwyer is seeded just 8th in the 200 free and 6th in the 400 IM, with some heavy hitters ahead of him.

15-year-old Courtney Harnish of the York YMCA will go for one of the biggest wins of her young career, holding the top spot in the 200 free over British Olympian Hannah Miley. Miley will shoot for two wins, sitting second there and first in the 400 IM.

2014 college grads Michael Wynalda (Michigan), Cody Miller (Indiana) and Pavel Sankovich (Florida State) hold top seeds in the men’s 200 free, 100 breast and 100 fly, respectively. At the same time, current college senior Molly Hannis is taking time out of her post-season schedule to swim in Orlando, holding the top seed in the 100 breast just a week before the SEC Championships.

Also holding a top seed is Canadian Audrey Lacroix, who leads the 100 fly.

Keep refreshing this page for event-by-event updates of all the action in Orlando.

Making her Arena Pro Swim Series debut in Orlando, Great Britain’s Hannah Miley came home with the win in her very first event. After a controlled prelims swim that earned her a middle lane and no more, Miley rocked her evening swim, winning a lengthy battle with Canadian Sam Cheverton.

Miley and Cheverton were starting to separate themselves from the field at the 100-mark, but Miley waited til the final length to really ice her lead, going 2:00.31. Cheverton was 2:01.16.

A couple of youngsters were tracking down the two international vets by the end of the race. High School junior Katie Drabot was 2:01.26, just a tenth behind Cheverton at the finish. And top prelims qualifier Courtney Harnish out of York YMCA went 2:01.32 for fourth.

The versatile Caitlin Leverenz rounded out that lead back of swimmers, going 2:01.69. Leverenz was the top American finisher on the entire series (then called the Grand Prix circuit) last year, earning a lease of a BMW.

Anyone who followed college swimming the past several years will know exactly what we mean when we say Joao de Lucca swam a Joao de Lucca race.

The former Louisville star has a penchant for scorching through the front half of a 200 free, burning away his biggest competitors and then hanging on for the win despite some obvious pain. Just as he did so many times at the NCAA level, de Lucca went out with some major guts and held on for a dominant win in 1:47.98.

He topped a pair of tough Americans for that title. US Olympian Conor Dwyer was second in 1:48.94, and 2014 Wolverine grad Michael Wynalda turned in a 1:49.47 for third.

Wynalda’s Club Wolverine training partner Bobby Hurley, an Australian, went 1:49.80 for fourth, the last guy under 1:50 on the night.

Jamaican Olympian and South Florida Aquatics star Alia Atkinson blasted to a lifetime-best in winning the 100 breaststroke. Atkinson went out like a rocket, leaving the field in the dust early on, and still put up the best second-half split of the field to end in 1:06.79. That time exactly ties her previous best, done at the 2012 Olympic Games.

Atkinson was chased by Tennessee’s Molly Hannis, perhaps the favorite to win the SEC title next week. Hannis went 1:08.02, well ahead of third-place Melanie Margalis (1:09.20).

The top few finishers were pretty spread out in this one, especially for a sprint-type race. Great Britain’s Chloe Tutton was 1:10.11, and Indiana grad/Badger Swim pro Bronwyn Pasloski was just over a second back at 1:11.21.

It was a battle early between Americans Cody Miller and Brendan McHugh and Brazilian Felipe Lima, but Miller used an outstanding turn to take over the lead and never gave it back. Miller nearly cracked his own lifetime-best in this race, going 59.92 for the runaway win. That’s just .01 off the time he went in winning nationals last summer.

Last summer’s 50 breast national champion, McHugh closed hard to take second over Lima, going 1:00.56, while the Brazilian fell off some and wound up third in 1:01.33.

Tennessee Aquatics pro Brad Craig was also 1:01 (1:01.63), as was former Japanese international powerhouse Kosuke Kitajima. Kitajima, who won back-to-back Olympic titles in both breaststroking distances and is certainly in the conversation for “Greatest Breaststroker of All Time,” was 1:01.84, going out just about half a second off the pace and never quite finding another gear to run down the top dogs.

Nicholas Quinn out of Ireland took sixth (1:03.17) in a very well-represented field internationally. Canadian Antoine Bujold out of Pointe-Claire was 1:03.25 and Russian Anton Lobanov 1:03.63 for 7th and 8th.

Canada’s Audrey Lacroix held onto her top seed, rushing into a 100 fly title with a 59.62. Lacroix was extremely patient with her swim. One lane over, SwimMAC’s sprint freestyle power Arianna Vanderpool-Wallace raced out to a lead of more than one second at the 50 mark, and Lacroix actually sat third at that point.

But the Canadian roared back in 30.87, the fastest second-half split by more than a second, and finished with more than a second’s lead on Vanderpool-Wallace. The Bahamian Olympian was 1:00.71 for second place.

Britain’s Lauren Quigley put up a 1:00.89 to take the final prize money-earning position. Following her was 15-year-old Courtney Harnish, swimming in her second A final of the night. Harnish went 1:01.54, beating Canadian 16-year-old Emma Ball (1:01.62).

Last year’s ACC Swimmer of the Year for Florida State, Pavel Sankovich was out of the spotlight for most of last fall. But the Belarus national stormed back into the spotlight Thursday night with a 100 fly win in 52.55.

The field was extremely bunched up at the 50-turn, with the top 6 swimmers all within .12 seconds. Sankovich was third at that point, but closed in 27.55 to take the win.

The only other guy to come home in 27 seconds was runner-up Giles Smith. The Arizona grad went 53.01, beating Club Wolverine’s Geoff Cheah (53.33) for second.

Phoenix Swim Club and Arizona State Sun Devil Alex Coci was fourth in 53.58, and joining him in the 53s was Venezuela’s Albert Subirats (53.76).

A few more Arizona-based swimmers rolled in next, led by Tuscon Ford’s Masa Kishida (54.60). Behind him was Erik Risolvato (54.61), who recently moved his training base out to the Phoenix Swim Club, but was originally a Florida boy.

Hannah Miley picked up her second win of the night, and the double was as tough as they come. On the heels of the 200 free victory, the Scottish swimmer turned around to dominate the 400 IM, one of the sport’s toughest events.

Miley cruised through the butterfly, trailing a few swimmers early, but dropped the hammer on backstroke. At the halfway point, she led by over two seconds, and only increased from there, going 4:36.74 to win by about four ticks.

Caitlin Leverenz was the early leader, and though she was powerless to stop Miley’s charge, she was able to hang on for second place, going 4:40.65. Former Georgia Bulldog Melanie Margalis started to close on the final leg, but it wasn’t quite enough to catch Leverenz, and Margalis ultimately took third in 4:41.29.

18-year-old Vien Nguyen was fourth. Nguyin swims for Saint Augustine out of Florida, but competes for Vietnam internationally. She rounded out the first big wave of finishers in 4:43.09.

Also of note: current Pro Swim Series points leader Elizabeth Beisel did not swim this race, scratching out of prelims. But the Gator Swim Club pro did join Rowdy Gaines in the announcing booth, explaining that she had scratched the race due to a groin injury suffered in Austin.

Beisel said she hadn’t done a breaststroke kick since that swim in Austin, and has been training almost entirely freestyle as she rehabs. But the US Olympian did say that she was expecting to be back in action for the Pro Swim Series’ next stop in Mesa, Arizona.

A former college standout at the University of Florida, Sebastien Rousseau kept his Florida magic alive, going 4:19.71 to win the 400 IM.

It was Rousseau’s back half that outpaced runner-up and prelims leader Tyler Clary. Clary made a run on backstroke, but Rousseaus 1:14 breaststroke split and 59.8 on freestyle easily shut the door, and the South African went 4:19.71 to win by three seconds.

Clary was 4:22.90, and Conor Dwyer, coming off of the 200 free earlier in the meet, was 4:23.22 for third. That means Dwyer will maintain his points lead over Clary, losing only a single point compared to Clary on day 1.

Island Swimming’s Alec Page was 4:23.83, just behind Dwyer. Then came a bit of a gap before Michael Weiss. The former Wisconsin Badger was 4:26.38, finishing mostly alone – the biggest gap of the final came after him, with Marko Blazevski‘s 4:31.82 being the next finisher.

Update: Meet Mobile results originally showed Sarasota YMCA as the event winners. This article has been updated to reflect the correct results.

York YMCA took home the final women’s event of the night, the 400 free relay. York was 3:52.02, and were led by Courtney Harnish and Meghan Small. Harnish capped off a busy night with a 57.73 leadoff split, while Small anchored in 56.80.

Pointe-Claire SwimClub out of Canada pushed them for the win, going 3:52.94. That was led by a 56.36 leadoff leg from Caroline Lapierre-Lemire.

Canada’s Team Ontario were third, going 3:23.32 and getting what is listed as a nice 57.06 leadoff leg from 14-year-old Penelope Oleksiak.

On the men’s side it was Mexico that took home the final event of the night. Jose Martinez and Luis Campos Alpizar each split 51 (Martinez was 51.96 and Alpizar 51.97) to help the squad go 3:29.60. Also on the relay were Alejandro Escudero and 400 IM A finalist Julio Olvera Alejos.

Pointe-Claire of Canada took second in 3:28.50. Matthew Ackman had the best split, anchoring in 51.84, and Antoine Bujold was also impressive with a 52.74.

Yeah, Dwyer and not Jaeger.

And De Lucca was only like, half a second ahead of Dwyer at the 100 and outsplit him on the last two 50s. Which doesn’t really sound like how it was written up here? (SORRY TO BE A COCK, JARED!)