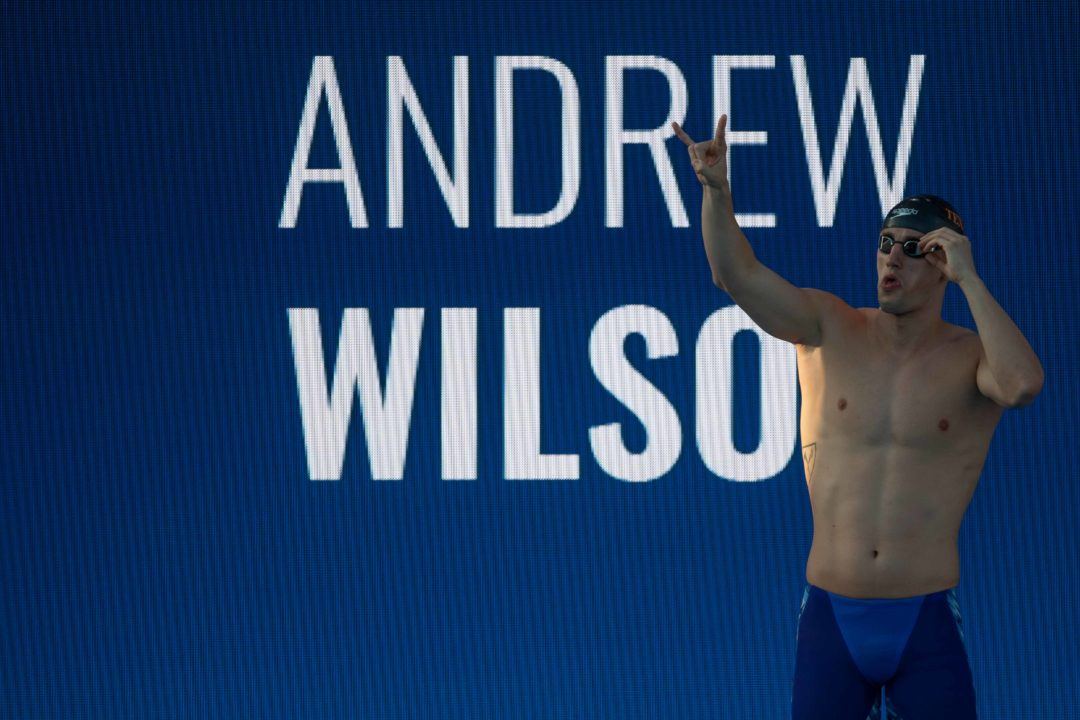 With a lane in the final tomorrow night, Wilson will have a shot at taking down Cordes' American Record of 58.64 from 2017. Archive photo via Mike Lewis/Ola Vista Photography

Swimming in the first semifinal of the men’s 100 breast tonight at Worlds, Andrew Wilson finished second to qualify fifth for the final with a new lifetime best of 58.95.

With that time, Wilson becomes only the fourth American man to ever break the 59-second barrier. Kevin Cordes (58.64 AR), Cody Miller (58.87), and Eric Shanteau (58.96) are the only other Americans to have ever done so, with Wilson joining their ranks tonight. He becomes the third-best American performer in history, as well as the 15th-best overall performer in history.

In prelims, Wilson was 59.26, his second-best time ever. His best until tonight was a 59.19, done at the 2018 Atlanta Pro Swim Series. He split 27.85 going out tonight, coming home in a 31.10; that back half is actually .13 quicker than Cordes was in the 2017 Worlds semifinals when he set the current American record. Wilson, who swam collegiately with Division III Emory, has spent time training with Texas’s pro group and has been stationed with the Athens Bulldogs at UGA since last fall.

With a lane in the final tomorrow night, Wilson will have a shot at taking down Cordes’ American Record, or at least jumping Miller’s #2 U.S. time in history of 58.83.

But if Greenbank can get 53.0 and/or USA has a bad leg all bets are off.

World Record is on notice by both teams.

Very glad to see this. Between him and Cody getting healthy again we may see a 58 split next summer.

The medley savior. I think the U.S has it unless pesty goes a 54 on the relay lol…