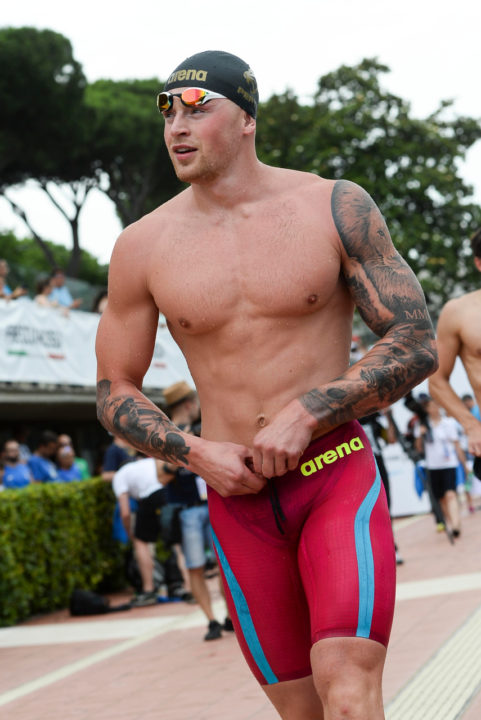 The British Summer Championships is among a host of meets cancelled by British Swimming today, due to the coronavirus outbreak. Archive photo via Arena

SwimSwam Pulse: 81% Would Rather Have Olympic Gold Over World Record

A vast majority of SwimSwam voters said they’d rather have an Olympic gold medal than a world record in the most-voted SwimSwam poll in history.

The British Swimming Championships, which were once the selection meet for this year’s rescheduled Olympic Games, had already been cancelled among the wave of international competitions impacted by the worldwide coronavirus (COVID-19) outbreak.

However, British Swimming has taken things one step further in light of the still-present danger coronavirus holds, as well as in light of the fact that the Games are now on the books for some time in 2021.

“Following the latest UK Government briefing on Monday, March 23rd, and having further discussed the impact of the current social distancing requirements, we have decided to cancel all of our end of season domestic Championships,” reads a statement by British Swimming.

The statement continues, “As you will appreciate the situation is rapidly changing, and with the closure of swimming facilities and related programmes nationwide over the weekend, and the lack of certainty around when opportunities to reopen might come about, this was a unanimous decision. It goes without saying that the health and wellbeing of our swimming community is the priority at this time and as such it is not right to focus on performance swimming. “

The London leg of the 2020 FINA Diving World Series, which was initially postponed, has also now been cancelled due to the escalation of COVID-19 worldwide.

Of these decisions, British Swimming CEO Jack Buckner said, “Following on from the Tokyo 2020 postponement yesterday, we have been left with no alternative but to cancel the British Summer Championships and the FINA Diving World Series. Whilst we have no clarity around when social distancing measures will be lifted, or when athletes and coaches will be able to return to what they do best, we feel this is the only appropriate course of action.

“Everyone at British Swimming and the Home Nations knows that this will come as a huge disappointment to all involved, but ultimately the health of the global population must come first. Thank you for your understanding at this difficult time.”

British Swimming says it will be releasing an entirely new selection policy for the 2021 Olympic Games and will also be reviewing the terms of the 2020 European Championships selection policy.

Some good covid-19 news in Britain today, ICL report stating the healtcare system now has the capabilities to withstand the peak of the virus pretty well in 2-3 weeks time. Also projecting we may well see “substantially” fewer fatalities than the previous best case scenario in UK projections. Good signs of the tide turning in Germany and Belgium too.

Great signs for the short term at least. What concerns me is that if we ‘flatten the peak’ sooner than other countries will we run a higher risk of having a second wave. Trying to think about the positive side of things though and hopefully we and everybody other country can successfully deal with this issue in the coming months.