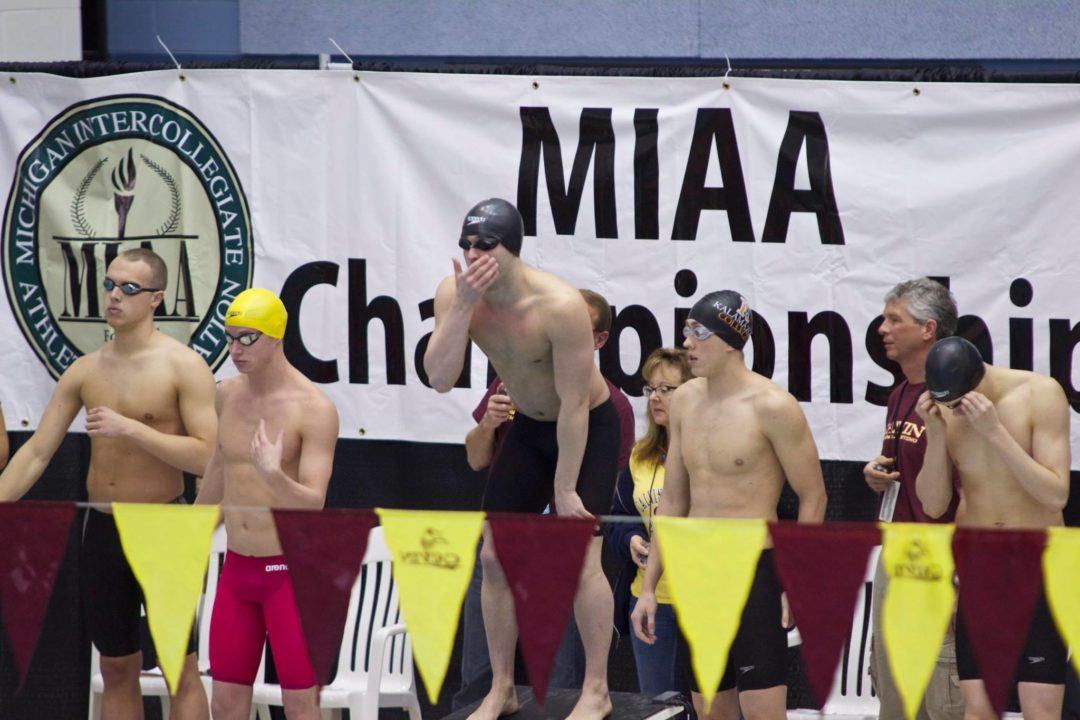 For the first time since 1971 Albion College won the men’s team title in the Michigan Intercollegiate Athletic Association (MIAA), knocking off the defending champions from Calvin College by a score of 985-772.  Albion swimmers claimed 10 individual titles and swept all five relays, and diver Jake Burris was champion on both the 1 and 3 meter boards, earning Most Valuable Diver honors in the process.  Sebastian Tostado, a senior at Albion, was named Most Valuable Men’s Swimmer after capturing 3 individual titles in the 200 back, 200 free, and the 200 IM where he set a new conference record in a time of 1:49.98.  Tostado also participated in the 200, 400, and 800 freestyle relays and the 400 medley relay.

In winning the 400 medley relay the Albion team of Tostado, Gerardo Huidobro, Nate Kozycki, and Derek Bosko clocked a 3:18.27 for a new MIAA record and finished exactly three seconds ahead of runner-up Calvin College.  Albion freshman Al Nyboer came close to the conference record in the 100 fly, finishing in 49.17 seconds, just shy of the 48.88 set by Hope’s Ryan Nelis in 2009. Albion’s Huidobro and Kozycki finished 1-2 in the 200 fly Saturday night while Nyboer finished 5th, racking up major individual points for the Britons in the last individual event of the meet.

The Calvin College women won their 13th consecutive MIAA title with an 868 point victory over runner-up Hope College who placed second with 687 points.  Calvin’s Abby VanHarn was named Most Valuable Swimmer, and teammate Sarah Bradley was named Most Valuable Diver.  In the final event of the meet Calvin’s 400 freestyle relay team of Madelyn Smith, Rachel Mattson, Anna Serino and VanHarn set a new MIAA record with their time of 3:28.50 to win by over five seconds.

The Kalamazoo College women’s 200 medley team of Christina Park, Ellen Neveux, Colleen Orwin, and Edsall lowered their own 200 medley relay record set in 2016, slipping under 1:44 for the first time in conference history with a 1:43.95.  Colleen Orwin was a three-time individual champion, taking the 200 IM, 400 IM, and 200 fly, earning NCAA B cuts in each event.  Hope College claimed five individual titles and barely edged out Kalamazoo for second place in the final team standings.