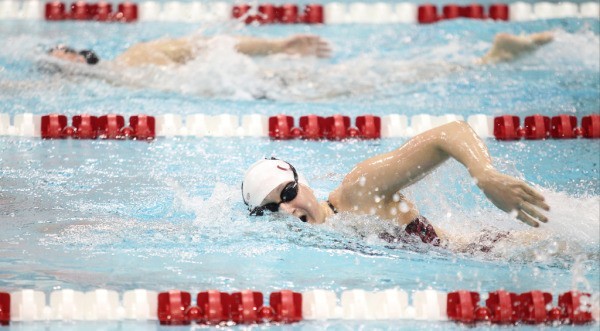 Junior Mia Nonnenberg led the way for the Bama women, picking up a pair of individual wins. Archive photo via Alabama Swimming

The Alabama Crimson Tide brought home another victory after their final road dual meet of the season against Georgia Tech. Junior Mia Nonnenberg led the way for the Bama women, picking up a pair of individual wins. She got the ball rolling in the 400 IM, posting a 4:20.09 ahead of freshman teammate Alexis Preski (4:23.50). Both swimmers returned for another 1-2 finish in the 500 free. Nonnenberg posted the only sub-5:00 time, winning in 4:54.05. Preski nearly broke the barrier as well, claiming 2nd in 5:00.07.

Freshmen Daniel Kober and Zane Waddell had a strong showing in the freestyles for the Crimson Tide men. Kober took control of the distance races, starting with a 15:43.95 victory in the mile. He then went head-to-head with teammate Will Freeman in the 500 free, charging home on the final 50 to win in 4:31.35 and out-touch Freeman (4:31.68).

ATLANTA, Ga. – The Alabama swimming and diving teams swept Georgia Tech Friday with the Crimson Tide women winning 150-91 and the UA men taking the top spot by a score of 145-96 in Atlanta.

“We’re right about where we expect to be with three-plus weeks to go until the SEC Championships,” UA head coach Dennis Pursley said.

The turnaround is quick for Alabama. After driving over and back on the same day for the Georgia Tech meet, the Crimson Tide returns home Saturday morning for a 10 a.m. CT meet with Florida State. It is the Tide’s Senior Day as well as it final regular-season meet. Senior day festivities start at 9:30 a.m. at the Alabama Aquatic Center. Admission is free and there will be multiple giveaways.

“We told the team that today was part one of the weekend and tomorrow’s meet is part two. With it being at home and Senior Day, we’re hoping and expecting tomorrow to be the better of the two days.”

The Tide women opened the meet with Georgia Tech by winning the 200 medley relay when sophomore Katie Kelsoe, senior Bridget Blood combined with juniors Hannah Musser and Bailey Scott combined to post a 1:42.33. They then closed the meet with the top finish in the 200 freestyle relay when Musser, junior Temarie Tomley, sophomore Morgan Fleming and Scott touched the wall with a 1:32.62.

On the men’s side of the meet, the Tide won the opening 200 medley relay when junior Luke Kaliszak, senior Anton McKee, sophomore Laurent Bams and senior Alex Gray posted a 1:27.83. The UA men then closed the meet by finishing first in the 200 freestyle relay when Kaliszak, Gray, sophomore Robert Howard and Bams touched with a 1:20.75.

THE FLATS – Georgia Tech swimming and diving recorded a total of seven wins and 32 top-three finishes on Friday in a non-conference dual meet at home versus the Alabama Crimson Tide at the McAuley Aquatic Center. The women’s team fell to Alabama 150-91, while the men’s team suffered a 145-96 defeat to No. 11 Alabama.

“We had some good performances today, but overall we just didn’t swim the way I know we are capable of,” said head coach Courtney Shealy Hart. “We haven’t competed in over a month, since Dec. 19, and it showed today because we were a little rusty. We are going to jump right back into training and continue to work towards the ACC Championships.”

The Yellow Jackets will return to action on Saturday, Jan. 28, for Senior Day. Tech will host both Florida State and SCAD at 11 a.m. at the McAuley Aquatic Center.

Highlighted by Iris Wang‘s wins in the 100 and 200 free, the women’s team posted a total of 16 top-three finishes combined between the swimming and diving events on Friday afternoon.

In the 200 breast, Tech took second and third overall, as Florina Ilie finished runner-up with her time of 2:19.32 and just in front of fellow Tech swimmer Kristen Hepler and her mark of 2:19.69.

In the 200 medley relay, the Georgia Tech team of Paschal, Ruiu, Branton and Kitchens took second overall with a time of 1:43.92, while the `A’ team of Wang, Kitchens, Ilgenfritz and Paschal took first-place in the 200 free relay with a time of 1:34.22.Men’s Highlights

Fellow diver Omar Eteiba, who missed the Virginia Tech meet, placed second in the 3-meter dive with an NCAA `B’ mark of 327.75 and took third overall in the 1-meter dive with his score of 267.83.

Alex Kimpel placed third in the 200 breast with his time of 2:01.52, finishing two spots in front of Joseph Portillo and his mark of 2:04.43, while in the 200 back the Yellow Jackets placed third and fifth overall as well with Rodrigo Quadros Correia (1:48.26) taking third and Robert Borowicz (1:50.04) finishing in fifth.

In the 100 free, Noah Harasz registered a runner-up finish with his time of 45.98, while freshman Aidan Pastel also scored for the Jackets with a fifth-place and a time of 46.88.

The Jackets picked up a win in the 200 free relay, as the unit of Harasz, Kranenburg, Borowicz and Dan Cohen Solal touched the wall with a time of 1:23.42, while in the 200 medley relay the `A’ team of Correia, Loschi, Southern and Harasz placed third with their time of 1:29.29.Tech Tidbits

* All career best marks are marks set during their time competing Georgia Tech.