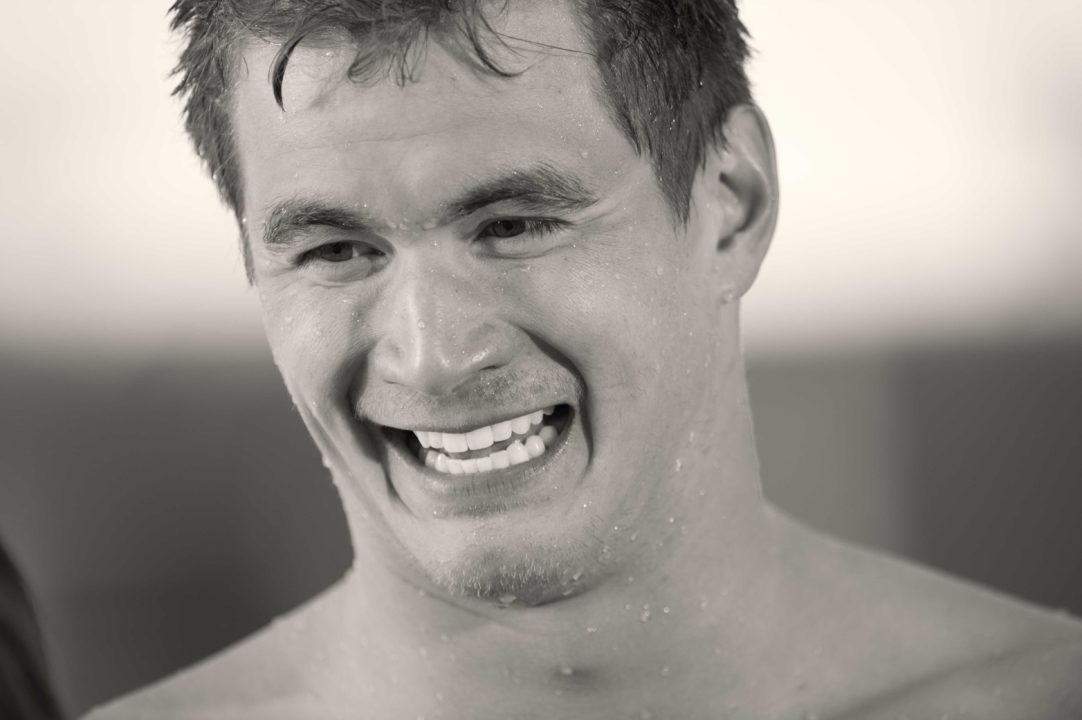 The men’s 100 yard freestyle was tabbed to be one of, if not the, premier event at this year’s United States Masters Swimming National Championships, and it lived up to billing.

In the men’s 25-29 age group, Nathan Adrian won and crushed the Masters National Record with a 41.13. That nearly cracked his own personal best that was done in 2009 at NCAA’s in the polyurethane suits; in combination with his 50 from Friday, and considering that this is the first weekend of May, Adrian continues to demonstrate how locked-in he is.

Adrian’s best time of 41.13 is not only the Masters’ National Record, but it also rattled the USA Swimming, any age, no-holds-barred American Record in the event, just .05 off of the mark Adrian already owns with that 2009 swim.

(Update: Adrian’s swim was originally reported as tying the American record at 41.08, but a statement from USMS on Sunday announced that this was a timing error, and his actual time was a 41.13. You can read the statement here.)

In this race, Adrian beat 29-year old South African Darian Townsend, who while still competing as a pro has become much more of a fixture on the Masters’ circuit, was 2nd in 43.13. That’s exactly a second away from the 42.13 that he had held as a Masters’ Record before today.

David Sims continued to be one of the biggest stars at this meet in the men’s 50-54 age group. He won his 3rd event of the weekend with a 47.74 in this 100 yard free, taking the group by two-and-a-half seconds.

A 4th swimmer got in on the record-breaking action in the men’s 80-84 age group. David Radcliff from Oregon was a 1:04.60 in the men’s 100 free; that not only won by 14 seconds, it broke the Masters’ National Record by more than 4. Radcliff has dominated the record book for his age group since Thursday, when he broke 4 American Masters’ Records in one swim on Thursday in the 1650 free.

Wouldn’t the question of whether it’s an official American Record come down to whether this was a US Swimming sanctioned meet? Which I don’t think it is…or is it??

But it seems dumb to ignore times from other meets, because then it’s not necessarily the fastest time ever swam by an American

In my opinion, USS swimmers should be free to compete in USMS meets and set US Masters records, as they do, but the meets should be sanctioned separately. If a meet is sanctioned by both then I guess it’s OK to set either or both records, although you then run the risk of blurring the lines so much that elite US Swimmers someday totally dominate the USMS meets and the USMS record books.

I guess I don’t care about the latter personally as it doesn’t affect me but if I was one of the top master’s swimmers I might care more. As for the former, I wouldn’t want USS swimmers to totally dominate the USMS meets, regardless of records.… Read more »

Personally, I’m not going to bellyache whatever decision USA Swimming makes, but it just seems like American Records should be the actual fastest time ever swam by an American, regardless of what body sanctions the meet. Barring a key difference in rules of course.

First, amazing swim by Adrian. I don’t know why this swim doesn’t warrant as many comments as Michael Andrew breaking another NAG record, but I guess that’s the state of click bait these days. (By the way, where’s the video of this swim? I would love to see it).

Second, as a former serious USS/D1 swimmer and a current (non-serious) masters swimmer, it would be a thrill to be in the same heat as someone currently at the top of the world rankings. I wouldn’t even sniff a circle-seeded heat at any other meet Adrian swims at, let alone an A-final, so these masters meets are a rare opportunity for that to happen.

Not surprising to see Mr Adrian so fast.
Generally when you swim in long course and the week after in short course, you feel very good and it looks very easy. The world cup meets after the world championships last summer were crazy fast with tapered swimmers from Barcelona.
Nathan was fast in Mesa last week in 48.23 so the transition to the bathtub must have been very easy for him and the result is a great 41.08.

That swim made the pool look about 15 yards long!

He is fast this year. Congrats to him

Here’s the Best Video of
2012 Olympic Gold Medalist
Nathan Adrian’s
41.13 100 Freestyle at the
2014 USMS Masters Nationals in
Santa Clara, CA on
Sat May 3rd, 2014
http://youtu.be/igb1wg7phMs
What’s remarkable is
it’s an old shallow pool,
With narrow lanes, &
The blocks didn’t have wedges.
That’s a sub 41 swim in a faster pool.

Nice to see the big names at masters meets. Adrian: wow. Anyone who thought his gold in London was a fluke better think again.

Awesome, awesome, awesome swim by Mr. Adrian. I saw him swim last week in Mesa as a volunteer and I love that he brought the same fire and “game” to Masters Nationals where I get to compete (albeit, not with him). It is ELECTRIC to have Olympians of any age competing at Masters’ meets. I think I speak for the vast, vast majority of USMS swimmers when I say – come one and all to play with us!