2014 CCCAA Swim and Dive State Champs Day 2: And the Assault on the Record Book Begins 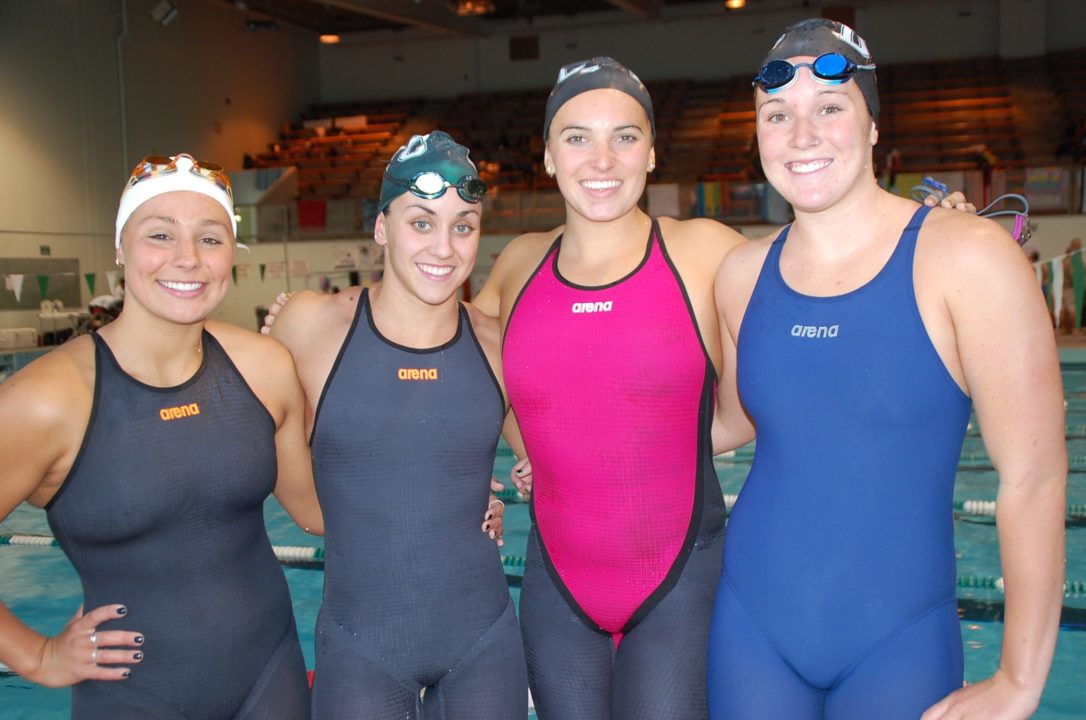 The 2014 CCCAA women’s meet couldn’t get much closer. A couple of relay DQs have given us significant point swings, and several teams have outscored both their psych sheet seedings and their prelims placings to shake things up. Still vying for the championship title are Orange Coast, Diablo Valley, Santa Rosa, Sierra, and Golden West. We are predicting Diablo Valley to come out ahead with a slight margin over Orange Coast, but really it’s anyone’s game. The 400 free relay is likely to be where it all happens; in any case it’s going to be very exciting.

Although they aren’t in the title race, Santa Barbara City College, East Los Angeles, De Anza, and Mt SAC have all outscored their pre-meet seedings and have also improved from prelims to finals. Both Santa Barbara and Hancock, who have also done well, are new to the meet this year.

The men’s meet is going much as expected, although relay DQs have muddled thing up a bit. Golden West is still out front by a huge margin, that even a relay DQ couldn’t diminish. Mt SAC and Santa Rosa have both outscored their seedings and are locked in a battle for second. Diablo Valley should have been in there with them but have been hurt by their DQ. They are currently fighting for fourth with Orange Coast and Ventura.

Some of the men’s performances worth noting have come from West Valley, Grossmont, Las Positas, and Long Beach City; all four are way ahead of expectations.

The Diablo Valley women broke their second medley relay meet record to begin a fast night of swimming at East Los Angeles College. Alexa Tchekmarev (28.75), Allison Gargalikis (27.95), Kelsey Leonard (24.85), and Laura Woods (23.54) combined for 1:45.09 in the shorter distance after having reset the bar in the 400 last night.

It was a rematch of the 2013 final in the women’s 200 IM: Pasadena City College’s Shannon Cheung and Golden West’s Melissa Bergesen finished second and third, respectively, separated by only .01 in last year’s match-up. This time around Bergesen earned the middle lane with a strong prelims swim and Cheung was in lane 5. The Pasadena sophomore took off like a shot, though, and was ahead by 1.2 seconds by the end of the backstroke leg. Bergesen outsplit her by a second on the breast but Cheung still had some legs left and brought it home for a 2:06.89 win. Bergesen took second in 2:07.20, while Santa Barbara’s Rachelle Visser got third.

It was clear from his first strokes that Golden West’s Hernandez was going for the state record in the 400 IM. He took it out hard and was already more than 2 seconds ahead of the field by the end of the fly. He continued to build his lead, splitting 52.2, 1:01.6, 1:05.8, and 53.4 for a final time of 3:53.20. Hernandez was 1.6 seconds under the previous state record of 3:54.84, set in 2001. Finishing second was last year’s runner-up, Daniel Roa of Golden West. Third went to defending champion Jonathan Diaz of El Camino.

In the first of her two individual state records for the evening, Gargalikis of Diablo Valley knocked off a 24.67 50 fly to clear the old mark by exactly .50. Brigitta Games from Golden West took second, while Santa Rosa’s Miranda Howell was third. In the men’s contest Eric Maginnis of Sierra held his own against challengers Riley Hagan of Diablo Valley and Riverside’s Seva Eagle. Maginnis won the state title in 49.95.

Diablo Valley’s Leonard, who won the 500 on Thursday, came in with a seed time that was faster than the meet record of 1:50.34. Having gone a respectable 1:54 in prelims she was set up in lane four ready to take on the record. She took it out fast enough but fell off pace. Her 1:51.20 was good enough for the win, though, and Kelsey Leonard had her second state title. Diablo Valley teammate Woods finished second; Mt SAC’s Rosemary Garcia was third.

Sikharulidze of Golden West picked up his second win of the meet as well, going 1:38.64 in the men’s 200 free. Sean Richards of Orange Coast came in second, while Brenton Sayers of American River rounded out the podium.

Less than an hour after her first state record of the night, Diablo Valley’s Gargalikis was back in the quest for another. Golden West’s Brigitta Games was also within shooting range of the meet record, right next to her in lane 5. It was a great race and in the end, while both made it under the old meet mark of 29.43, it was Gargalikis who claimed the record and the title, finishing 28.19 to Games’s 28.95. Third went to American River’s Jenner Johnson, finishing just .02 ahead of Yingfei Zhang of East Los Angeles.

The men’s 100 breast produced another new meet record: Jia Ng of Santa Monica won the race in 53.80, more than two seconds faster than anyone else in his heat, and .72 under the previous mark. Second place went to Golden West’s Loai Tashkandi; John Bing of Santa Rosa was third.

The women’s final was like the prelims, just faster. Miranda Howell of Santa Rosa won in 26.21; Golden West’s Lauren Vosseler was second with 26.69, and Mt SAC’s Kiersten Shew touched out Pasadena’s Ting Peng 26.99 to 27.09 for third.

Orange Coast divers had a strong showing on the three-meter board on Friday. Rae Adams won the event with 242.45 points, while her teammate Candis Buck took second with 237.95. Aimee Bruns of Riverside picked up her second bronze medal with 227.30 points.

Brandon Cox of Sierra had another strong day, this time in one-meter diving. His 317.55 final score was the top performance by 50 points and established a new meet record. Mauldin James from Riverside finished second with 268.20; Thomas Dillon of San Diego Mesa took third with 264.90.

Allison you still have the Champion in you, Terrapins, Carondelet, UCLA and DVC. Congrats on a record breaking and very commendable swim season.