With the United States’ two most high-profile swimmers already out of this meet (Natalie Coughlin and Michael Phelps), Ryan Lochte... 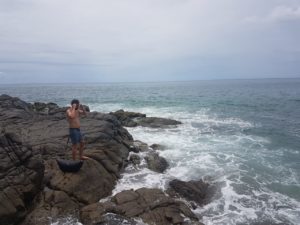 An extreme athlete is planning on circumnavigating the world and breaking a world record in a triathlon that is 120 times the length of an Ironman.

With the United States’ two most high-profile swimmers already out of this meet (Natalie Coughlin and Michael Phelps), Ryan Lochte checked out as the third, with his declaration after last night’s final that he was done for the rest of the National Championships with three days of competition left to go.

Lochte told reporters after the meet that if he had known that it would be so hard to race back-to-back meets halfway around the world, that he wouldn’t have wasted his time swimming at Nationals at all. This is much deserved rest for a man who hasn’t taken much in the way of a break for well over a year, and surely his fans will appreciate the efforts that he did put in to swim two races.

In that 100 fly prelim, without both Lochte and Michael Phelps, the latter of whom stayed behind in China to do some charitable work, the top seed coming out of prelims was Tim Phillips, an Ohio State Buckeye who is spending the summer (and possibly the next year) training with SwimMAC Carolina. Phillips’ top-seeded mark was a 52.03, which is already a career-best time for him, and ties him for 11th in the world. It will be great if he can dip down into the 51’s tonight, which would make him the third American to clear that range this year (no other country in the world even has two).

Just behind him was World Championship bronze-medalist Tyler McGill in 52.17 (he was 51.2 last week) and Davis Tarwater in 52.29. If you add in the 4th seed Eugene Godsoe, who called this Stanford pool home until about 14 months ago, SwimMAC has 3 of the top 4 seeds in this final tonight. Also in this final will be Stanford’s Bobby Bollier, who won the 200 fly final last night. Don’t look now, but he’s in an outside lane, just like he was in that 200 fly final.

In the women’s 100 breaststroke, without Rebecca Soni in the race there were no super-fast times, but there will still be a solid final tonight. The top seed will be 2010 NCAA Champion, and WUG member, Annie Chandler of Tucson Ford in 1:08.29. Behind her was Laura Lindsay, who is a mid-major superstar at Toledo. In 3rd was Wisconsin’s Ashley Wanland in 1:08.57, followed very closely by Corrie Clark (1:08.65) and Jessica Hardy (1:08.68).

In the women’s 50 free, former American Record holder Lara Jackson took the top seed in 25.11. That’s her best time since the 2009 U.S. Open. Behind her is a cluster of America’s top sprinters, with Amanda Weir, Kate Dwelley (who’s been on fire this meet), and Kara Lynn Joyce all swimming 25.2’s. The B-final of this race will be almost as star-studded as the A, with Missy Franklin (25.5), Liv Jensen (25.61), and Dana Vollmer (25.62) all competing in that second heat. (Jessica Hardy ended up declaring a false start in this race).

In the men’s 50, Nathan Adrian swam a 22.14, which is almost as fast as he went in his swims at Worlds last week, where he was 4th in this event. Jason Lezak swam a very good 22.28, which is almost identical to his Pan Pacs time from 2010. Texas will be well-represented in this final with Jimmy Feigen (22.30) and Garrett Weber-Gale (22.34) also making the A-final. Nicholas Brunelli, Adam Small, and WUG’er Josh Schneider also made this A-final.