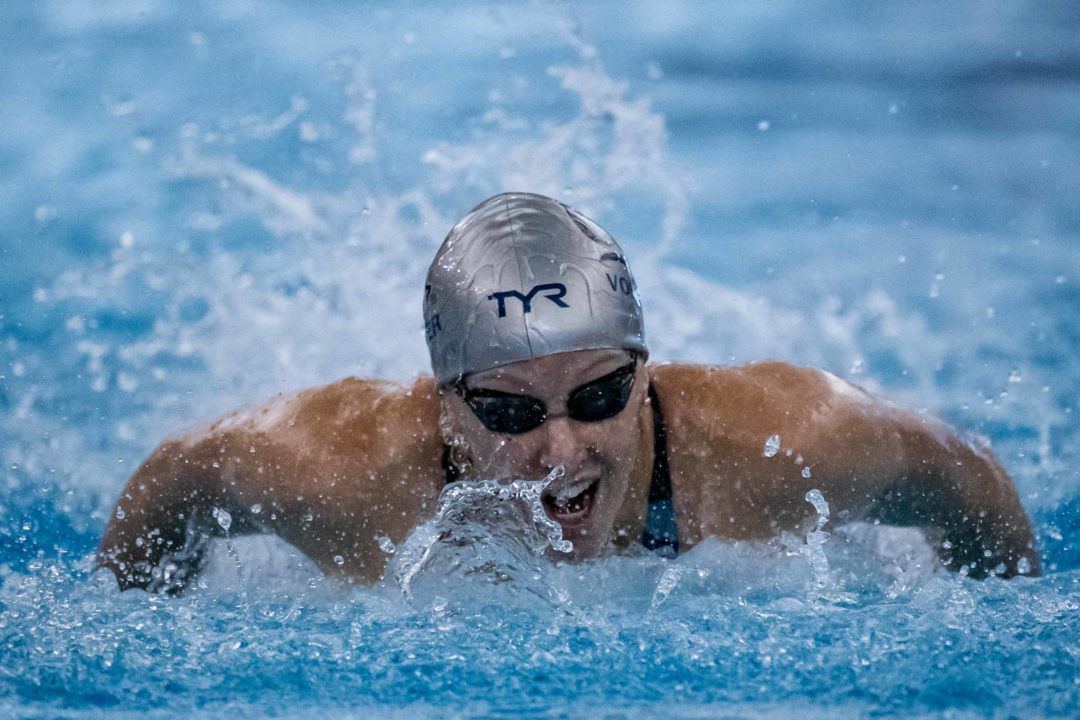 Let's take a more current look at the women's Olympic medalists from Rio who will most likely not be racing next year in Tokyo. Archive photo via Mike Lewis/Ola Vista Photography

In March of 2018, I took a look at the men’s and women’s swimming medalists from the 2016 Olympic Games in Rio, gauging who had, at that point, announced retirement, suffered a career-altering injury, or were otherwise no longer in the running for a podium repeat come Tokyo 2020.

We recently revisited the men’s list, taking a look at whose status had changed from two years ago. You can review that post here.

Now, let’s take a look at the women’s statuses who has changed since that last post two years ago.

Belarusian Aliaksandra Herasimenia snagged bronze in the women’s 50m freestyle in Rio. That followed her double silver performances at the 2012 Olympic Games, which saw the now-33-year-old grab runner-up behind the Netherlands’ Ranomi Kromomwidjojo in both the 50m and 100m free there in London.

As of this past August, Herasimenia announced her retirement. She married fellow Belarusian swimmer Yauhen Tsurkin in 2017 and the couple welcomed a baby daughter, Sofia, in September 2018.

Jazmin Carlin is one of Great Britain’s most successful Olympians, having snared silver in both the 400m and 800m free events at the 2016 Olympic Games. Those accomplishments were added to her over-a-dozen international medal haul across her 6-year prime.

Since Rio, Carlin’s career turned toward open water swimming. The now-30-year-old competed at the 2018 European Championships placing 14th in the individual 10k and 4th as GBR’s 5k team.

Backstroking ace Hilary Caldwell of Canada called ‘time’ on her career in 2018 after moving to Australian to train under storied coach Michael Bohl.

The 2018 Commonwealth Games represented her last competition, with the swimmer missing out on medals after having produced a 200m back bronze at the 2016 Olympic Games.

Longtime American national teamer Katie Meili revealed just last year that she would be hanging up her goggles. The Team Elite mainstay had landed on the Rio podium with a bronze in the 100m breaststroke and also helped the Americans earn the top podium spot in the women’s medley relay by way of her prelims outing.

Another Canadian in Sandrine Mainville said goodbye to competitive swimming since Rio, with the now-28-year-old revealing her retirement in 2018.

Mainville was a member of Canada’s bronze medal-winning women’s 4x100m freestyle relay in Rio, after having helped Canada reach the same result in the mixed 400m free relay at both the 2015 and 2017 World Championships.

Mainville announced her retirement just two weeks shy of the Canadian Pan Pac Trials in 2018, with the decision coinciding with her last month as a law student at Borden Ladner Gervais in Montreal.

Another member of the aforementioned women’s 4x100m free relay from Rio was Chantal Van Landenghem, who also departed competitive swimming since those 2016 Olympic Games.

Van Landeghem swam collegiately at Georgia, but while representing Canada, won a bronze medal and set a Canadian Record as a member of the Canadian 400 free relay as a finals swimmer in Rio. She also swam on the country’s 400 medley relay, which placed 5th in the final. Individually, she swam the 50 free and 100 free, missing the final and placing 10th in both races.

Dana Vollmer took bronze in the women’s 100m fly in Rio, following up her monster 100m fly gold in London at the 2012 Games.

Vollmer expressed that she planned to train for 2020, and had her second child in July 2017.  She returned to competing in November 2018, but missed hitting the times it would take to set her up to make the 2020 Games.

She raced multiple stops of the inaugural FINA Champions Series this spring. She announced she injured her shoulder during her race at the Budapest stop in May of 2019 and did not compete since. She revealed retirement plans in July of 2019.

Another relay stalwart in the form of Australia’s Brittany Elmslie will e absent in Tokyo, with the freestyle ace having put her racing suit away in April of last year.

Elmslie helped teammates Emma McKeon, Bronte Campbell and Cate Campbell break the women’s 4x100m free relay world record in Rio en route to gold, splitting a solid 53.12 as part of the 3:30.65 winning effort. The record has since been overtaken.

Elmslie most recently competed at the 2019 Australian Nationals, where she finished 8th in the 100 free.

Although American Missy Franklin‘s most successful Olympics came in 2012, she still effectively represented the United States in Rio by way of her prelims swim on the women’s 4x200m free relay. She ultimately helped the stars n’ stripes snag gold in the event before she said goodbye to swimming officially in December 2018.

Franklin is the second-most-decorated woman in long course World Champs history, both by gold medals and overall medals. Her 11 golds between 2011 and 2015 rank second only to Katie Ledecky‘s 12. And her 16 total medals sit second only to Natalie Coughlin.

2-time Olympian Jess Ashwood of Australia quietly retired from swimming in 2018 after an impressive career that saw the 26-year-old wreak havoc on her nation’s record boards.

Ashwood helped the Aussies snag silver via her prelims swim as a member of her nation’s 4x200m freestyle relay at the 2016 Olympic Games.

Since, however, she has seen another Aussie teen in the form of Ariarne Titmus take control of the Aussie distance game, wreaking havoc across all free distances from the 200m to the 1500m. Ashwood ultimately wound up withdrawing from the 2016 Short Course World Championships and also the 2018 Pan Pacific Championships 18 months later.

In 2018, Olympian Tamsin Cook of Australia decided to hang up her goggles and separate herself from elite competitive swimming at just 19 years of age. The 400m freestyle finalist from Rio said she would no longer be training nor competing and doesn’t foresee herself doing so in the near future.

Cook was just 17 when she helped Australia take silver in the women’s 4x200m freestyle relay in Rio. She battled American Katie Ledecky on the anchor leg of that relay. Tamsin also finished in an impressive 6th place in the individual 400m free.

The most recent retirement announcement came from Danish swimmer Mie Nielsen, with the 24-year-old making her intentions known just this week.

Pedersen explained she had planned to take a break after the 2020 Olympic Games to give her injury-plagued shoulder a break. However, she pointed to the postponement of the Games to 2021, along with ‘great uncertainly that is associated with the delay’, as a reason for her decision now.

Another member of that Danish bronze medal-winning relay retired as well in Rikke Moller Pedersen. Pedersen is the reigning 200m breaststroke world record holder, but the 30-year-old athlete has struggled in the past several years.

Regarding her decision to leave swimming in January of this year, the Dane said, “It has been a difficult decision that has taken me a long time to take. In the process, I have struggled to place and prioritize the things that made the weight scale tilt towards my career stop.”

In our review of Rio medalists not possibly not heading for Tokyo, we listed American Allison Schmitt as questionable. The former Georgia Bulldog-turned Olympic gold medalist from London did not officially announce retirement after Rio, where she helped America take relay gold and silver (800 free relay, 400 free relay). At the time of the publication of our 2018 list, however, she hadn’t raced since Rio – a period of more than 18 months.

Why is Allison Schmitt on that list? The Americans haven’t had their trials yet, she hasn’t announced retirement, and is currently competing. Why is she on a list counting her out for Tokyo?

Hope that helps clear things up.

No mention of Jessica Ashwood is complete without her incredible story of overcoming scoliosis (severe back curvature)…I recommend everyone click this link and look at her back x-ray and wonder how the hell she ever swam competitively! https://www.smh.com.au/sport/swimming/standing-tall-jessica-ashwood-is-finally-on-the-straight-and-narrow-20190515-p51nqs.html