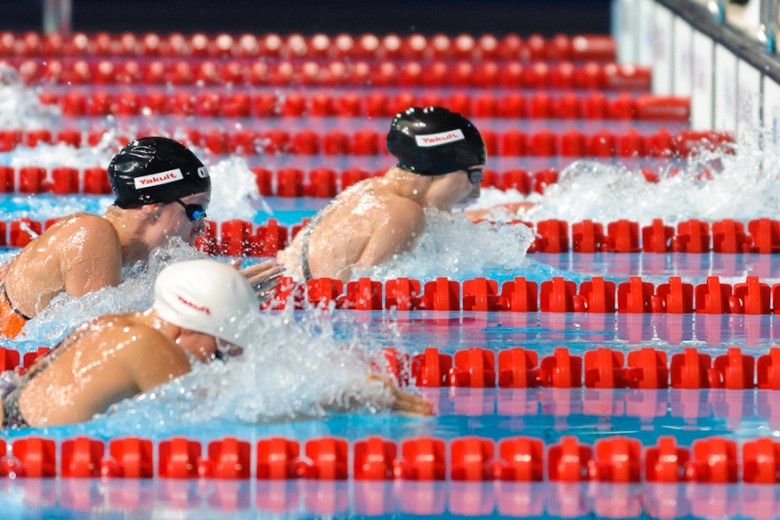 Ruta Meilutyte was somehow faster in the 50 breaststroke after getting off of a trans-continental flight. That and more in our 9 Big Things. Archive photo via Victor Puig

We’re down to one day left of the 2014 LEN European Aquatics Championships, and day 6 was plenty exciting. Here are 9 big things we learned:

1. Mireia Belmonte Garcia is dangerous when fresh: Last night we saw Belmonte at her most exhausted, swimming three races in one session including an 800 free and 200 IM literally back to back. On night 6, Belmonte got to show off what she can do with some recovery time, winning her second-straight European title in the 1500 free. She also broke the meet record and the Spanish national record in the process, blowing out the field by 5 seconds.

2. No jet-lag for Meilutyte: Lithuania’s Ruta Meilutyte has been conspicuously absent so far in Berlin, as she chose to compete in the Youth Olympic Games instead. Meilutyte had a good time in Nanjing, winning two gold medals, but apparently that wasn’t enough for the 17-year-old world record-holder. Meilutye flew in from China in time to swim the 50 breast here, and was actually faster getting off the plane. She’s the top swimmer out of the semifinals with a 29.88 – her gold-winning time in Nanjing didn’t even break 30! Will Meilutyte threaten her own world record in the final? Maybe she needs another plane trip across the world to gain those final four tenths.

3. Poland gets on the board with double gold: Through day 5, Poland had just a single bronze medal at these games. But the Poles got on the board in a big way on day 6, earning not one but two gold medals. First, Konrad Czerniak broke the meet record en route to a 51.38 100 fly win. (That’s faster than all competitors at Pan Pacs except world record-holder Michael Phelps). Then Radoslaw Kawecki defended his European title in the 200 back, doubling up Poland’s gold medal tally and rocketing them into the top 10 in the meet’s gold medal table.

4. Three in a row for Pellegrini: Italy got a big boost from one of their all-time swimming greats Federica Pellegrini in the 200 free. Pellegrini, now 26, won her third-straight European title in the 200 free with a 1:56.01. Pellegrini holds all the major records in the event, including the world mark, but has never been quite the same since the fall of the shiny suits in 2009. Still, Pellegrini continues to prove she’s not just a “suit-swimmer” with her performances in Berlin, headed by this one and her outstanding relay anchor leg for the Italians on the 4×200.

5. Morozov misses out again: Russian sprint star Vlad Morozov has had an odd week. He was the gold medalist in the 50 back, but sandwiched around that swim were two disappointments in the freestyles, his specialty. Morozov missed the final of the 100 free as the fourth Russian (only two per country are allowed into the semifinals), and he did the same on Saturday in the 50. His 22.35 isn’t a terrible time, and qualified him 12th, but he was once again the 4th Russian, missing out on another swim by just .02. That’s two rough breaks for the young future of Russian sprinting, who’s right now barely even a member of his country’s relay.

6. Brits continue to stockpile: Great Britain has had the best meet so far in terms of medal performances, and they just continue to rack up the medals each day. Now up to 6 golds and 19 total medals in the pool, Great Britain got two more golds on day 6. Those came from breaststroker Adam Peaty and backstroker Fran Halsall, who led a 1-2 finish for the Brits. With Halsall in line for another medal in the 50 free tomorrow among others, it doesn’t look like anyone will be catching the Brits in medals this season.

7. Hosszu vs Belmonte set up in 200 fly: Considered two of the true ironwomen of professional swimming, Spain’s Mireia Belmonte Garcia and Hungary’s Katinka Hosszu are set to go head-to-head in the women’s 200 fly. Both women excel in tough doubles and in swimming the events everyone else is afraid to go after. If there’s a true heavyweight, knock-down-drag-out title fight in this whole meet lineup, this 200 fly is it.

8. No new record for Peaty: Great Britain’s Adam Peaty broke the world record in the semifinal of the men’s 50 breast, and based on his glide into the finish, there was plenty of fan chatter that he could lower the mark even further in the finals. But when that final rolled around, Peaty was just 27.00, about four tenths off his world record. That’s a good reminder that tenths never come easy, particularly not in a 50 when an athlete is world-class. It’s also an indicator that perhaps Peaty’s finish wasn’t as long as theorized – in breaststroke and butterfly, being a bit long into the finish is generally better than rushing in an extra stroke (Michael Phelps in 2008 aside…)

9. Redemption set up for Sjostrom: OK, it’s hard to consider it “redemption” in the proper sense. But Sarah Sjostrom was clearly disappointed to wind up second in the 100 fly last night, and it broke her fantastic gold medal streak at these games. But Sjostrom is now the top seed heading into finals of the 50 free after tonight’s semis, and she’ll meet the Brit Fran Halsall in what might be her biggest test yet. Sjostrom has been one of the clear stars of these championships, and she’d love nothing more than to go out with a gold medal in that 50, rather than repeat the experience of her .01-second 100 fly loss.

Peaty’s improved finish in the final was more than offset by an unusually poor start that left him eighth early on. If he gets both ends of the race right then he’ll surely go into the lower 26’s in the not too distant future.

An emotional win as well for Belmonte after her grandmother passed away yesterday.