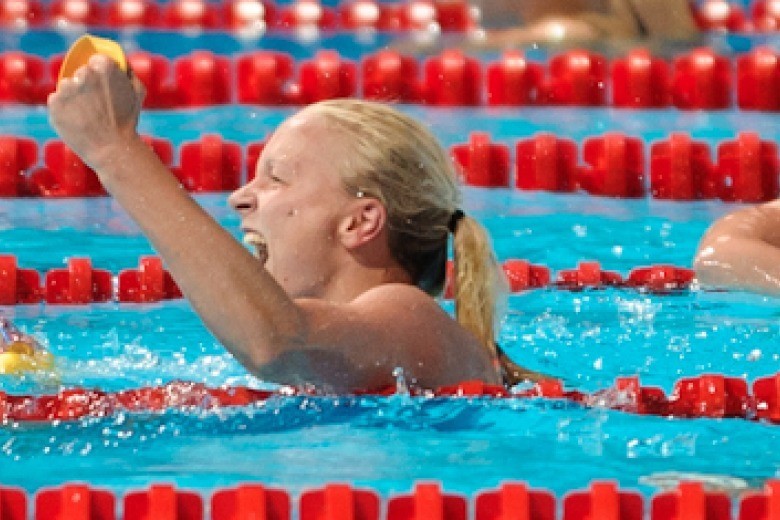 Sarah Sjostrom was a sprint beast over last week, but her world-leading split on the 4x200 free relay shows she's far more than a fly-and-die type. Archive photo via Victor Puig

With a trifecta of major international meets taking center stage last week, there were no shortage of big-league records being set. Whether they were word, junior world, meet, European, Commonwealth, national or all-comers records, the collective swimming record books took a barrage of shots this week from Berlin (and the European Championships), Nanjing (the Youth Olympic Games) and the Gold Coast (the Pan Pacific Championships. (Side note: a shout out to our own records guy, Troy Gennaro, for his great work keeping up with the weeklong deluge).

But with all those well-publicized records, let’s look at one swim that didn’t break a single one, a swim that, while it got quite a bit of fanfare, is one at risk of slipping through the cracks of a wild weekend in the world of swimming.

Though the women’s 4×200 free relay at Euros went to Italy, and much of the glory to anchor Federica Pellegrini, who ran down Sweden from way back to take gold, the fastest split in the pool came from Sweden’s Sarah Sjostrom – and it wasn’t even close.

As is often the case with Sjostrom this year, what’s most impressive is how far ahead of the world she was. A look at how she stacks up to the 10 fastest splits in the world last week:

When we say “it’s not even close,” we mean it. Sjostrom was seven tenths faster than American phenom Ledecky, and two full seconds faster than anyone else in the world.

Perhaps more impressive is that the 200 is far from a focus event for Sjostrom. We hear much talk about how difficult it is to train speed at multiple distances; we’ve heard swim fans doubt that a sprinter like Nathan Adrian can be the world’s best in the 50 and 100 free at the same time, given the difficulty in training both straight-line top speed and extended speed like the 100 calls for. But Sjostrom has proven she’s elite not only at the 50 and 100, but also in the 200, a race that requires far more pacing and endurance than most sprinters can live up to.

Sjostrom won the 50 fly and 100 free prior to this relay split, and also finished second in the 50 free and 100 fly by a combined margin of .06 seconds. Had she been able to fit the 200 free into her lineup, the Swede would have won that event too, even if her flat-start added well over a second compared to her relay exchange. That’s world-class speed over a tremendous range. That is a HardCore effort.

Totally agree. I haven’t figured out yet if there ever was a modern swimmer with the same characteristics. PVDH, Matt Biondi, Natalie Coughlin? She is crazy fast across 3 very different distances, and in 2 strokes. Perhaps no one really compares.

I am not. But I was thinking of someone with both pure sprint speed (50) and mid-distance speed (200), not just someone with speed across 3 distances (otherwise, I might have mentioned Katie Ledecky). MP was never a sprinter. As Jared noted, with today’s specialization it is hard already to excel in both 50 and 100. But this girl covers 200, too.

Not sure about comparisons, but your comment reminds me of how much I wish we could’ve seen Coughlin really focus on the 200 IM. I remember in 2008 when she dropped a 2:10 out of nowhere, then went on to improve to 2:09 to break the AR at the Janet Evans Invite, and in light of that decided to give it a go at Trials, ultimately going on to beat Hoff for the bronze in Beijing — all while backstroke (and to an extent, the 100 free) was still her focus.

Philippe Lucas is developing Sharon von Rouwendaal into this kind of threat. She wins the 10k at Euros, silver in the 5k, gold in the team event, then jumps in the pool and goes 4:03 in the 400 free for silver. As recently as last year, she was a 200 backstroker, winning bronze in the event at Worlds. Makes you wonder how fast she could have gone without 15k+ of swimming before the 400 free. Her 800 suffered for it. She’s only 20, and she has the work ethic to succeed in his program. If anyone is going to challenge Ledecky in the future, I see it being Sharon. Remember also that Sarah went a 4:06 400 free out of… Read more »

At this point do you even call her a sprinter or just “all around amazing (non-distance) swimmer”? (Somewhat like Caeleb Dressel if you are aware of him)

doh. Seems I’m not the first to mention Dressel. Didn’t see this one haha.

Dressel is a good case in point. But before he can compare he must post top world times, not just age group records. Which, incidentally, I hope and believe he will, starting next year.

Can anyone tell us what happened to Dressel this summer? Injury? Illness? Taking a pre-college break? He looked like he’d been run through a machine with an incredible shrinking athlete ray. I’m certainly hoping he returns to the path he appeared to be on last summer and fall. He looked last year like Coach Troy’s replacement for Lochte’s dominance role in the Gator program; if he is not able to recover he likely won’t even qualify for, much less score or win, at NCAA. He did show a small spark on the last day of Nationals; he made it to, and won, 50 free B final at :22.51. But even that paled next to his :22.22 last summer at Junior… Read more »

Apparently he took a lot of second semester off to enjoy senior year, so I don’t think he had much training under his belt by the time Nationals rolled around. I’m not sure how his coach plans out the season, but if getting back into shape involved six weeks of aerobic work (which is not uncommon at all) then he probably couldn’t handle any serious, fast training until mid or early July (assuming he started practicing consistently around May– I have no idea). So by the time Nationals rolled around, he either had very little speedwork/fine tuning under his belt or his system hadn’t adapted to heavy training volume/intensities yet and so his taper was thrown off/non-existent. The second theory… Read more »

The sad news is that she probably will never swim the 200 free at the Olympics. It conflicts with her schedule.

This is certainly a fun discussion. The “range” issue can sometimes be affected by more than just training and muscle fiber issues. Many years ago, back in the days of 6/6 in NCAA finals, there was a swimmer for John Mechem at the University of New Mexico (Larry Farrar) who scored individual points in the same NCAA Championship meet in both the 50 Freestyle and the 1650 Freestyle … and could not score individually in the 100, 200 or 500. A real “fact stranger than fiction” tale.
Jared – you might want to remember to use spell check (“dalluge” presumably should be “deluge.”

I mean, seriously, that 1:53.6 in a relay leg converts to what, a low 1.54 flat start? That would have been enough to win silver at the last Olympics and gold at the last Worlds. I can’t accept the idea that she does not even try and see what she is capable of in the 200. If not at the Olympics, at some other international meet.

Conversion depends on the exchange reaction time which affects the degree of advantage from the flying start. Typically though you would add more than 4 tenths. Usually it’s somewhere between two thirds of a second to three quarters.

Don’t forget about Soibhan O’Connor’s 1:55.82 at the Commonwealth Games! That ranks fourth behind Emma McKeon because Emma went 1:55.57 to win the event in Glascow.

Macslewis – that top 10 listing is purely relay splits done over the past week, as noted in the paragraph right above the list.

Frustrating when readers don’t read the written word. They just look over the list and come up with their own thoughts!