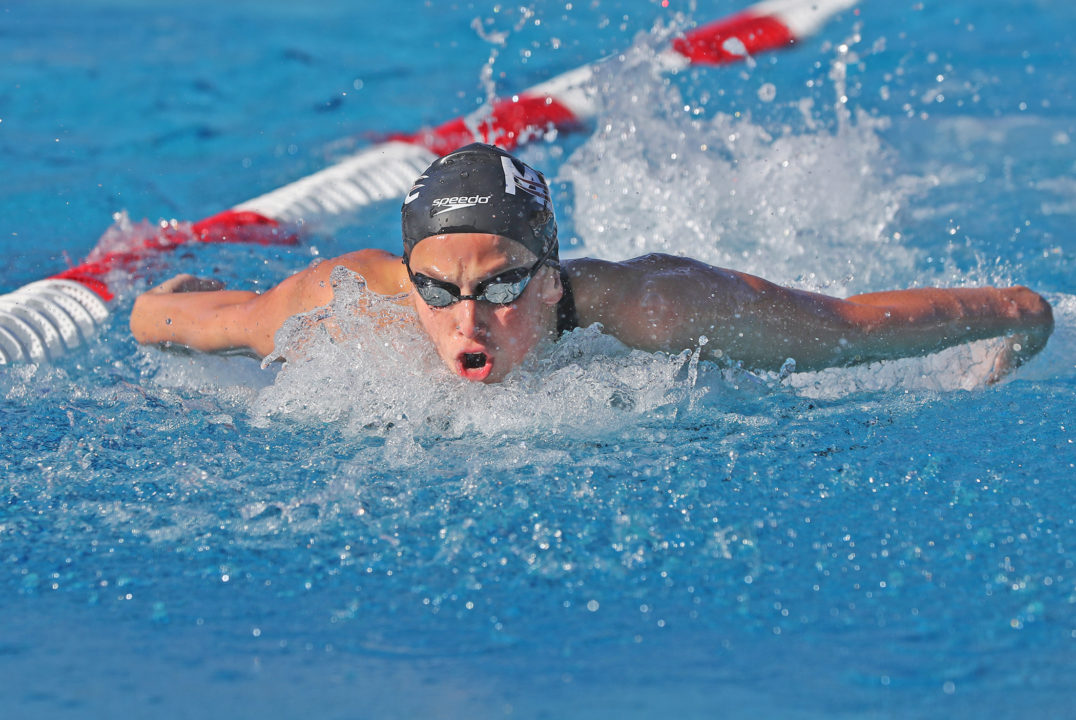 Though Lillie Nordmann raced at this weekend's Stanford Invite, she is still not planning to compete for the Cardinal varsity squad this season. Archive photo via Tony Svensson

US National Teamer Lillie Nordmann has arrived in California but is still not planning to compete for the Stanford Cardinal varsity squad until next season, head coach Greg Meehan told SwimSwam this weekend.

Earlier this year, Nordmann, who finished high school in the spring, said on the SwimSwam Podcast that she would be deferring her start at Stanford because of the uncertainty of the ongoing coronavirus pandemic. Thus it became a surprise when she showed up on the results of yesterday’s meet between Stanford-based swimmers and Cal-based swimmers.

Ultimately this move doesn’t have any huge net effect on eligibility, given that the NCAA has given winter sport athletes, like swimmers, an extra season of eligibility because of the uncertainty over the pandemic, structuring her time this way does allow her to focus on preparing for long course and the US Olympic Trials next summer.

Nordmann was the 6th-ranked recruit nationally in the high school class of 2021 and was part of Stanford’s top-ranked recruiting class. That class also lost the services of World Record holder and #1 recruit Regan Smith for this season after she decided to stay home in Minnesota and train.

Nordmann’s older sister Lucie also swims at Stanford, though she did not participate in this weekend’s meet.

Question about this from the article: “Ultimately this move doesn’t have a huge net effect on eligibility” — how does Nordmann training in Palo Alto have *any* impact on her eligibility?

Well, the decision has the net impact on eligibility that she’s not eligible to compete for the Stanford varsity this year. It’s by her choice, but that’s still technically an impact on her eligibility.

The choice to not compete this year also reduces her collegiate eligibility from 5 years to 4 years. That’s another impact.

If needed because of injury, couldn’t she apply for an Olympic waiver for this year and still get 5 years to swim 4?

If she swam this year she would, in theory, have 6 years to swim 5.

So, because of corona, we could theoretically have someone win an event at NCs for 5 years straight?

That assumes there will be NC’s this year.

Help me out b/c I don’t know the rule. Is the normal rule that once you finish High School (or something equivalent for swimmers coming from abroad), you only have 5 years to complete your 4 years of eligibility? In other words, taking a “gap year” (which is what Nordmann is essentially doing) is the same as using up your one redshirt year?

No, gap year does not count since if you are not enrolled at the college. 5/4 starts counting after you are registered in college and start taking classes and are part of the team.

That’s kind of what I thought b/c it appears Nordmann is taking a gap year (and just happens to be training with her future coach), but Braden is saying that 5/4 clock has started for Nordmann. Who’s right – Braden or PsychoD?

Braeden is saying that Lillie will have four years once she starts college (presumably next year)- the same the current college freshmen will have after this year due to the fifth year ruling.

STB is correct in his understanding of what I’m saying. For swimmers in college this year, it’s not a 5/4 clock, it’s a 6/5 clock.

Where is Ella Eastin training?

Hopefully in a swimming pool