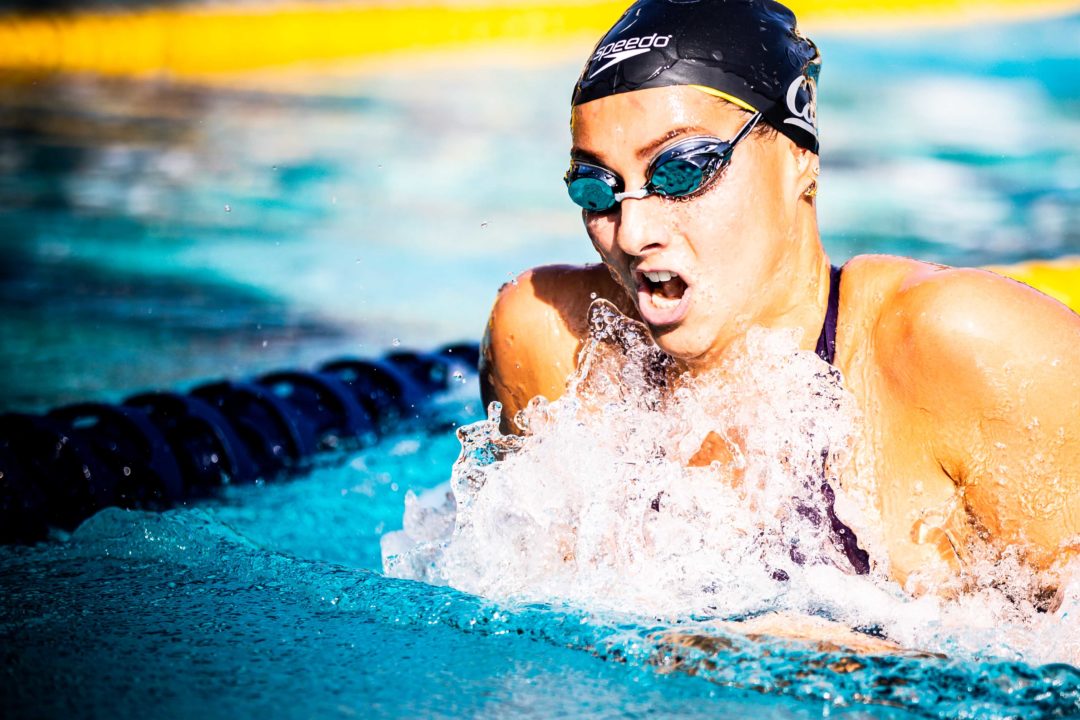 Nathan Adrian made an appearance at the meet, swimming the men's LCM 50 and 100 free. Stock photo via Jack Spitser/Spitser Photography

With the Covid-19 pandemic still raging, and restrictions still in place, Bay Area opponents Cal and Stanford are taking the opportunity to race each other more often than usual. This weekend the Bears traveled over to Stanford, with some of their men’s swimmers as well, and competed in another unscored dual meet featuring both SCY and LCM racing.

Cal junior Ema Rajic threw down lifetime bests in both the SCY breaststroke events, taking down the Cal team record in the 100 breast. Rajic clocked a 58.93 in the 100, winning the race by nearly 2 full seconds. Rajic already held the team record at 58.97, which she swam last season. The junior wasn’t done yet, however, as she came back in the 200 breast and posted a 2:07.16 to knock over a second off her previous best of 2:08.23. The swim marks Rajic as the #2 Bear all-time, although she still has quiite a bit of ground to make up on Cailtin Levernez’s 2:04.76 team record.

STANFORD – Junior Ema Rajic set a Cal record in the 100-yard breaststroke and posted the No. 2 time in school history in the 200 breast, as the Golden Bears took on Stanford for a second consecutive weekend in a non-scoring dual meet Saturday.

Rajic covered the 100 breast in 58.93, just under her mark of 58.97 from the 2019 NCAA Championships. She also finished the 200 breast in 2:07.16 for a more than one-second improvement from her previous personal best, keeping her second in the Cal annals.

In addition, two other Bears posted improvements among Cal’s all-time best list. Sophomore Alicia Wilson lowered her PR in the 400 individual medley to 4:04.10, good for the No. 3 mark at Cal, while freshman Isabelle Stadden went 1:49.77 to win the 200 back. The time puts her in the No. 4 slot on the school’s all-time list in the event and is a 1.4-second improvement over her 200 back result from last weekend.

The meet also features several long-course events, as well as swimmers from the Cal and Stanford men’s teams.

All props to the young dudes and dudettes, but Nathan Adrian’s 21.98 is pretty nice, and he came within a hair of doing his one-millionth 48 in the 100 free.

Roy’s 2:08 is obviously a mega-impact swim, but how about Simone Manuel going 53.3 in the 100? 4th fastest in the world this year and her fastest ever outside of June, July and August. Not bad for getting back into things!

Would love for Simone to get the WR

Hoffer listed as a junior – isn’t he a senior now?

TBH if only one swimmer in a college dual meet is misclassed on results, they’re doing well.

So is Reece listed as sophomore

Out of the swims to headline the article: Daniel Roy posting back to back 2 breast PBS, one of which is 5th in the world, Destin Lasco with a 1:39 2 back as a freshman, Ledecky ripping a 8:16 800 free, Brooke forde posting a 4:02 400 IM, Ema Rajic’s 100 breast probably wouldn’t have been my top choice

Totally agree. Busy convering ISL- soooo many articles about them…this article was like ‘by the way…’

Let’s go Bears. Awesome racing by both Stanford and Cal women and men. Looking forward to the rest of the (potential) season!