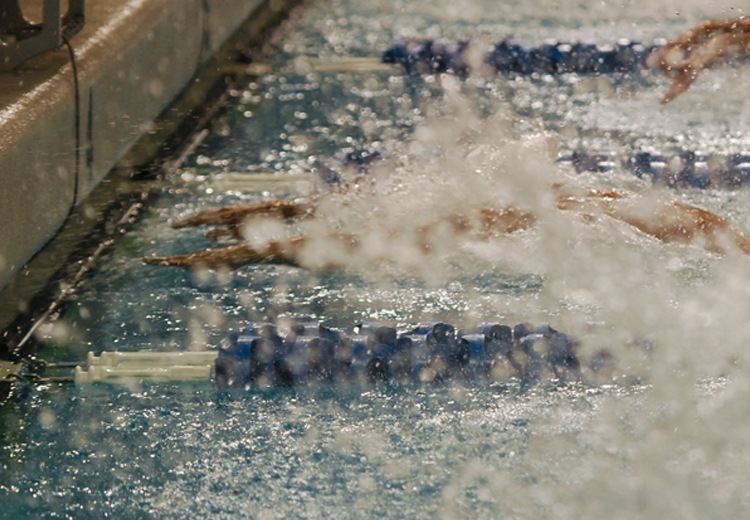 It's been a meet of close finishes in Nanjing, with two gold medal ties already on the books in three days of racing. Stock photo via Janna Schulze/SwimSwam.com

Three days of the Youth Olympic Games are in the books, and we’re starting to see some overall themes emerging. First and foremost, we’re finding out exactly what a close meet this is.

Day 3 saw (1) our second – and nearly our third – gold medal tie. American Hannah Moore went out fast, but Italy’s Ambra Esposito roared home to even things up in the 200 back, with the pair tying for the gold medal. That came a day after the boys 100 backstrokers tied for gold. One event after Moore and Esposito, China’s Li Zhuhao nipped Aleksandr Sadovnikov for boys 100 fly gold by .03, narrowly missing yet another tie. And later still in the night, 100 back co-champs Simone Sabbioni and Evgeny Sedov finished .02 apart in the 50 back semifinals, setting up another tight battle tomorrow night. Thus far, YOGs have been nothing if not closely-contested.

Another anecdote that shows how close this meet has been: on day 3 we got to see the rare distance free win from an early heat. (2) Italy’s Simona Quadrella blasted to an 8:35.39 out of the mid-day heats, putting up a meet-leading time that actually held up, even through the top 8 seeds in the final heat at night. Quadrella got the rare opportunity to watch herself win a gold medal, viewing the top 8 competitors from the pool deck and watching all 8 fall short of bettering her time.

We also got another Junior World record in a meet where many of them have been on the chopping block. (3) This was the unique girls 100 free mark, which was broken by Shen Duo at Chinese Nationals but not officially ratified by FINA. Shen then broke the mark in heats at Youth Olympic Games, nearly missed the final with a relaxed semifinals swim that left her 8th, and finally rose all the way back to the top to win the final in 53.84 – it goes without saying that this was one of the most roller-coaster-y single event rides of anyone this season.

Duo’s great swim was just one of many for the (4) Chinese delegation, which really found its stride at home on day 3. In addition to Shen, Qui Yuhan also medaled in that 100 free, taking bronze in 54.66, quite close herself to the old Junior World Record before Shen got her hands on it. The aforementioned Zhuhao won a tightly-contested gold in the boys 100 fly, and He Yu was the top girls 100 breast qualifier not named Ruta, as the battle for second in the sprint breaststrokes in Nanjing is just about all any swimmer can hope to compete in. It’s been a great day for China, which continues to pile up medals and medal opportunities.

That success (5) hasn’t come without controversy, though, as is so often the case with Chinese athletics. A huge breakout swim by Yu Hexin in the 50 free has birthed a bit of a flame war over potential age discrepancies. Yu threatened the 22-second barrier, going 22.01 to lead the semifinals, and now sits .03 off of the Junior World Record.

There’s been speculation that Yu was at one point listed with a 1995 birthday at a local Chinese meet, which would make him ineligible, though no documents supporting these claims have been found. Yu is currently listed as being born on January 1st of 1996, making him the oldest possible swimmer eligible for this meet.

Yu is unfortunately a victim of his own nationality at this point, as China is commonly accused of improprieties like age-adjusting or doping in various sports. At this point,  it would only seem the most fair way to treat Yu’s swims are to take them at face value. Distrusting a swimmer’s integrity 100% on the basis of his or her nationality is a slippery policy, as there’s really no major world sporting power that hasn’t had athletes accused of (or caught in) some form of rule-breaking. There’s no question that folks will keep digging for further information, which is important. But until there’s some form of hard evidence and not just speculation, Yu must be considered innocent until proven guilty.

The unfortunate part about the age controversy is that it’s overshadowing (6) what could be the premier race of these Youth Olympic Games. Some of the biggest names in the entire field are set to collide in the 50 and 100 frees, and we’ll see them all head-to-head for the first time tomorrow night. Brazil’s Matheus Santana is one of the biggest stars of this meet, turning down a Pan Pacs bid to compete in Nanjing. Now with Yu in the mix, plus Trinidad & Tobago’s rising star Dylan Carter, look for the 50 free and the later 100 free to be high-stakes, heavyweight showdowns between boys who could be some of the world’s best in a very short while.

It’s Hexin Yu…
Many times when a swimmers birthdate is not known, they just put 1/1 for birthdate in the database.

I could be mistaken, but I believe “Yu” is his family name, which comes first in Chinese. At least, that’s how he’s listed on the Chinese Nationals results I’ve seen (Example here: http://www.china.org.cn/china/Off_the_Wire/2013-04/07/content_28470527.htm)

I could be wrong, but that is the way its listed in the database. And, it the athlete profile it is listed as (last name first)

I do not believe China does not submit all their times for world rankings.