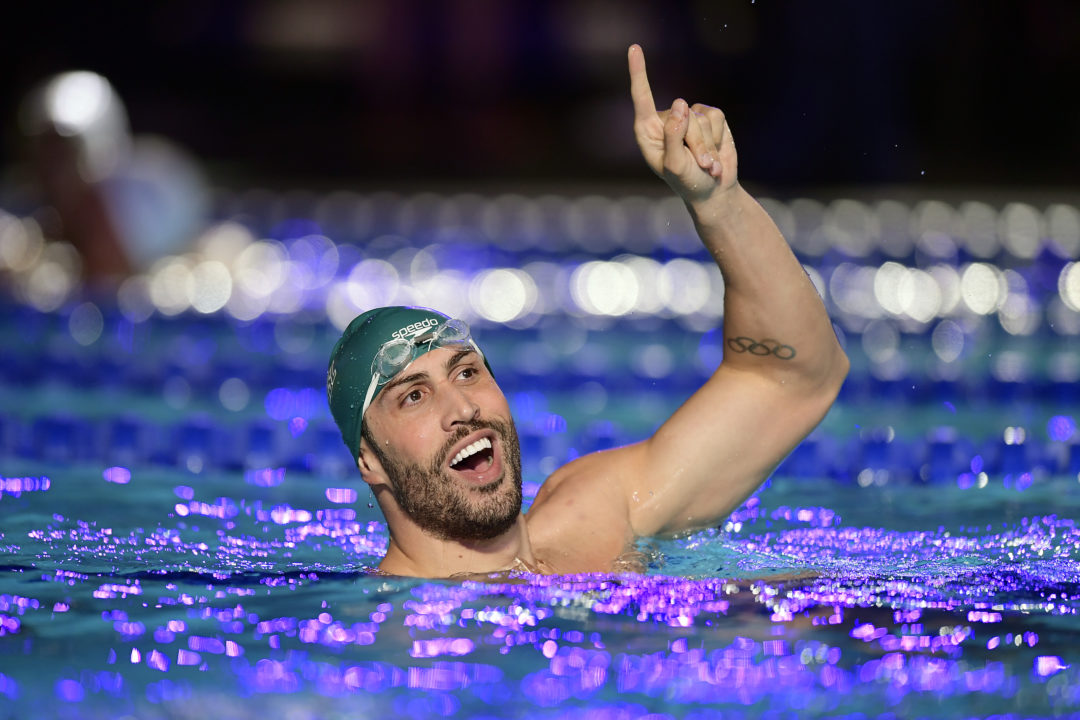 It's a battle of the backstrokers, as Ryan Murphy, Christian Diener, Guilherme Guido and Ryosuke Irie are all lined up for match #5. Archive photo via Fabio Ferrari/LaPresse

This one is going to be a very even match at the top – something we haven’t really seen since Energy and Cali’s battle in match #1. We’ve got three of our top five teams in our Week 2 Power Ranks, and we should get some clarity on their order after this week.

London won a lopsided victory against a weak field in week 1. LA nipped Tokyo in week 2 while London was on bye. The finish order could be any permutation of the three this week.

2. Battle of the Backstrokers

That team battle might turn on one set of events: the men’s backstrokes.

It’s a relative strength for all three of those teams. LA has Ryan Murphy, the current series MVP points leader and winner of the 50 back skin race in both of his appearances so far. The current also have sprint specialist Zane Waddell, though he hasn’t competed yet and it’s unclear if he’ll swim this weekend or not.

London currently has two of the top 3 swimmers in the league in the 50 back, with ISL leader Christian Diener and ISL record-holder (with his 22.55 from last year) Guilherme Guido. Diener has also previously won a skins race.

Speaking of the Trident, they’ll be in a tough spot for team points this week, but have a chance to extend their unbeaten streak in the mixed 4×100 free relay this season. DC beat London by two tenths in week 1 and went more than a second faster to win on Monday.

That relay has been buoyed by league 100 free leader Zach Apple, but swimmers have stepped up across the roster to fill in that relay squad. DC probably gets its toughest test this week: the Trident have been 3:17.60 for the #3 time in the league this year, but LA was 3:17.64 in their week 2 match.

London dominated in week 1, and they got even more top swimmers ready to go over their week 2 bye.

James Guy, Freya Anderson, Holly Hibbott and Tom Dean were all held out of match #2 through contact tracing from a coronavirus case in their British training base before the ISL season. All four are expected to be able to return this week and shouldn’t feel any ill effects of their absence – none of the four tested positive for COVID and were only held out due to contact tracing protocols.

Guy is probably the team’s best 400 freestyler, boosting an event where London was 6th and 8th in week 1. Dean is likely the team’s #2 entrant there, and last week they had to resort to using flyer Vini Lanza and backstroker Elliot Clogg to fill that event.

Anderson might have the highest impact – she sits atop the team’s depth chart in the 200 free and should be a huge relay boost in the 100 free. Hibbott is probably the team’s best 400 freestyler on the women’s side, and the 200 free might ultimately feature both Anderson and Hibbott despite Marie Wattel and Siobhan-Marie O’Connor going 1-4 last week.

The medley relay takes on special significance this year, with the winning team picking the stroke for the skin race. Match #5 might have some of the closest medley relay matchups we’ve seen so far. Here’s a look at the season-long ranks of all ten teams and their best medley relays, with match #5 teams bolded:

The women’s medley should be a thriller, with LA and London just tenths apart in season-bests. The men’s race pits the two best medleys in the league against one another.

We also saw most teams get quite a bit faster in the relays in their second matches – perhaps with more data points to use when selecting relay lineups. That could give a boost to Tokyo and London, who will be in just their second meet this weekend.

When LA won last weeks’ medley, they chose freestyle. That’s probably a good choice again, as it takes advantage of Tokyo’s weakness and a just OK area for London.

Tokyo would have a tough call. They don’t have one clear sprint standout on the women’s side. Breaststroke is a strength for them, but probably a better strength for London with Alia Atkinson in the mix. Tokyo’s choice might come down to (1) which of their swimmers has the hot hand on Friday and (2) which team they’re in the closest battle with. Picking breaststroke would help London but really hurt LA. Picking backstroke might be Tokyo’s best choice, but also aligns with strengths for LA and London. Picking fly probably helps LA and hurts London.

LA has won the men’s medley twice, choosing backstroke in both showings. The presence of London and it’s great backstroke group could sway that decision, but probably wouldn’t change LA’s choice. A London relay upset might let the Roar pick breaststroke, because even though their backstrokers are great, they might have more of an advantage over LA in breaststroke.

Our take on storylines 🤣

13
0
Reply
About time
Reply to  TheSwimSuitGuy

Awesome! The patriotic commentary was the best!

These are always awesome

Why hasn’t Zane competed yet?

There hasn’t been any public explanation for why, so it may just be ‘coach’s choice.’ Remember that each team has to leave 2 men and 2 women on their bench in any given meet.

Waddell? From a comment from another meet, someone said he was having trouble having a passport that contains his Hungarian VISA delivered.