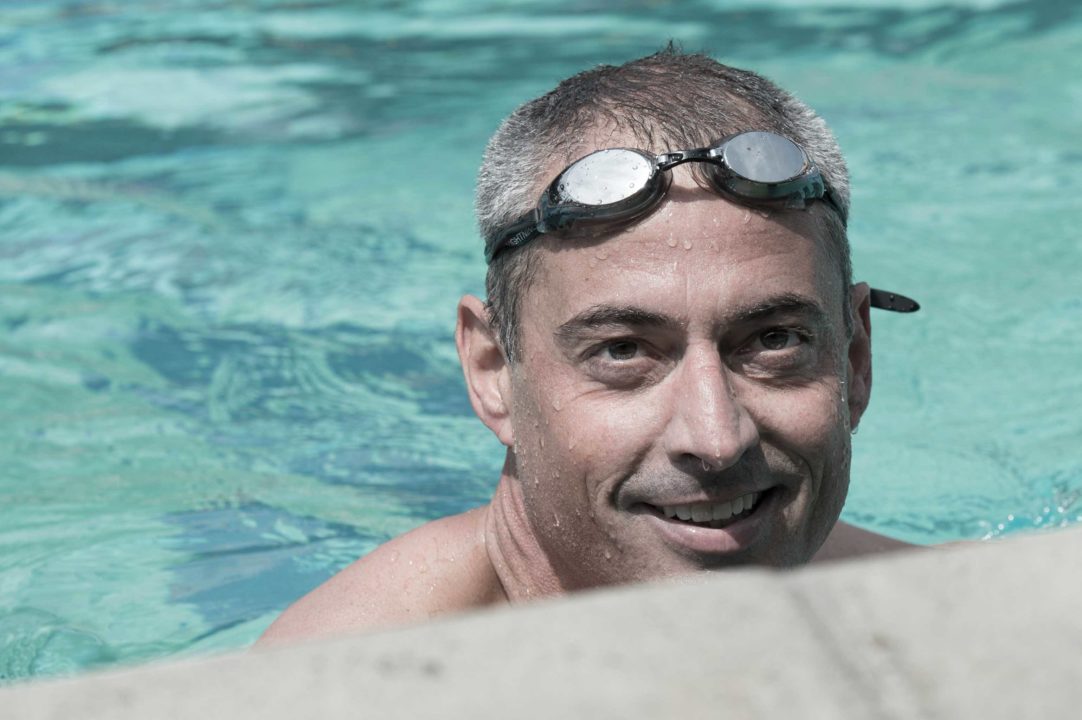 Between Phelps and Spitz was Matt Biondi, one of the greatest American swimmers of all time. Here are three things lessons that he imparted on a generation of swimmers. Stock photo via Tim Binning/TheSwimPictures.com

I will never forget the 1988 Seoul Olympics. As an 8-year old who was starting to really get into swimming, it was my first experience watching the best swimmers in the world. For a week during September of 1988 I sat mesmerized learning about and watching names such as Michael Gross, Kristin Otto, Kriztina Egerzegi, Janet Evans, and Matt Biondi.

Each day I sat cross legged in front of my parents old Zenith television, dutifully hitting record-and-pause on the crusty old VCR each time swimming races came on. I soaked it all in, the pre-race profiles on swimmers (did you know Tomas Darnyi – who won the 400 IM – was blind out of one eye because of a snowball fight? Crazy!), and going back to that VHS in subsequent years each time I was looking to wield motivation for my own swimming aspirations.

Looking back on those Games, here are three lessons that Matt Biondi taught me about swimming–

1. Distance per stroke is awesome.

As an 8-year old I had yet to hear about distance per stroke. And truthfully, I don’t think I would have fully understood the concept – after all, wasn’t the idea to get your butt to the other end as fast as possible? Extending the stroke and being more efficient would have seemed counter-intuitive when all the other sprinters at the local pool were thrashing and splashing their way to first place finishes.

In later years, when swimming became a little more serious, things such as stroke count and DPS were introduced to the local white-board. It was then that I thought back to Biondi and his lengthy stroke. He made it look so easy, and with the speed that he was achieving, I was more than happy to abandon the thrashing for a stroke that was exponentially more elegant.

To this day when I head down to the Y for a swim, I still imagine myself cruising freestyle as Biondi, surfing above the water, riding that smooth freestyle across the distance of the pool.

2. Finish on a full stroke.

What some people forget is that before Phelps it was Biondi who had the closest shot at tying Mark Spitz’s record of 7 golds in a single Games. While he did come quite close – winning 5 golds – he did manage to come up short in a couple races. And not by much.

In the 100m butterfly stroke, Biondi went into the final with the second fastest time. He was heavily favored to win the event, and coming off the wall at the 50m Biondi was in control of the race. He held a half-body length over West Germany’s Michael Gross and Surinam’s Anthony Nesty and the rest of the field. As the finish closed in, Biondi discovered himself in a bit of a pickle – he hadn’t timed his strokes correctly on the second 50 metres, meaning that he would have to finish on half a stroke or glide in from about 2.5 metres out.

Unfortunately for Biondi, he chose the latter. He glided in – the glide which even upon re-watching seems to take about 3 days — while two lanes above Nesty closed in a flurry on a full stroke. Nesty finished first, winning by 0.01 hundredths of a second, quite literally stealing the race at the last possible moment.

3. Drafting is a legit thing.

In the 200 meter freestyle, which Biondi was favored to win as well, his long, powerful stroke was on full display.

Among the field were two other swimmers who had also held the world record in previous years – Gross and Poland’s Artur Wojdat. As the final got underway, Biondi charged out to the early lead. He was absolutely dominant over the first 100 meters, crushing the WR pace at the 100 meter mark by nearly a second.

Coming off the 100 Biondi continued to surge, leaving a massive, rolling wake behind him. Australia’s Duncan Armstrong, swimming just below him, recognized this, hugged the lane-line separating the two swimmers and hitched along for the ride.

Armstrong turned a meter behind him at the 150m, and with the energy saved from surfing on Biondi’s wave, charged past the American and touched the wall in first in a new world record time of 1:47.25 while Biondi would fade to 3rd.

The lesson here? Don’t give your competition a free lift to the podium.

It still amazes me that after all these years and all those achievements people still can’t type their names correctly:
It is Krisztina Egerszegi (not Kriztina Egerzegi) and Tamas (not Tomas) Darnyi. I do not want to further confuse non-Hungarians with a special character in Darnyi’s name, so let’s just leave it at that. The funny thing is no one makes a mistake when it comes to Arnold Schwarzenegger’s name 😀

His son Nate will be swimming for Cal this year. He has making big improvements in the last 18 months. It will be fun to watch him develop. Go Bears.

Great article. Based on the age of the comments it appears this article is promoted here every year or so. Justifiably.

I still have tapes of those 1988 Olympic swimming races. I uploaded them to YouTube maybe 7 or 8 years ago and received hundreds of comments until the IOC started targeting my channel for copyright complaints. They forced me to take down some specific races and finally YouTube shut down my channel. Then not all of the races were subsequently provided on YouTube by the IOC and Olympic channels. Ridiculous. If you target something you should make sure you aren’t denying viewership.

The aspect of finishing on a full stroke is my ultimate pet peeve in this sport. It… Read more »

Magnini notably raised his head in the last meter of his 100 free final in Montreal 2005 … he still won, but he took a big chance and lost a few hundredths there …

Phelps might have something to say about this. I can think of at least two seemingly improvised finishes that proved his genius at getting the hands to the wall. It would be hard to convince me that he planned this 8-10 meters out…

That’s correct Asher re: Artur never holding the 200 M Free WR, and I agree with your assessment that he was the greatest 2-beat kick freestyler of all time. People don’t believe it when I tell them that for the last 2.5 years he trained with me, we stopped even attempting to have him do straight up “kick sets”…it was a waste of time. The only way to get him to kick “hard” in practice, was to swim “hard”.

You did a great job with him at Iowa and I would rank him as one of the greatest Hawkeye swimmers of all time. All the greater given his inability or unwillingness to kick;)

MALE 2 beat freestyler- there have been many great women swimmers since then with that style, including the contemporaraneous Janet Evans.

Thank You, I learned more from him, than he ever learned from me! Not necessarily about the physiology of training, but certainly about managing training 😉

Who votes this down??

Yep. The great Mr. Biondi is still great. He’s an example of what makes swimming a great lifetime sport. Nice article about a standout swimmer.