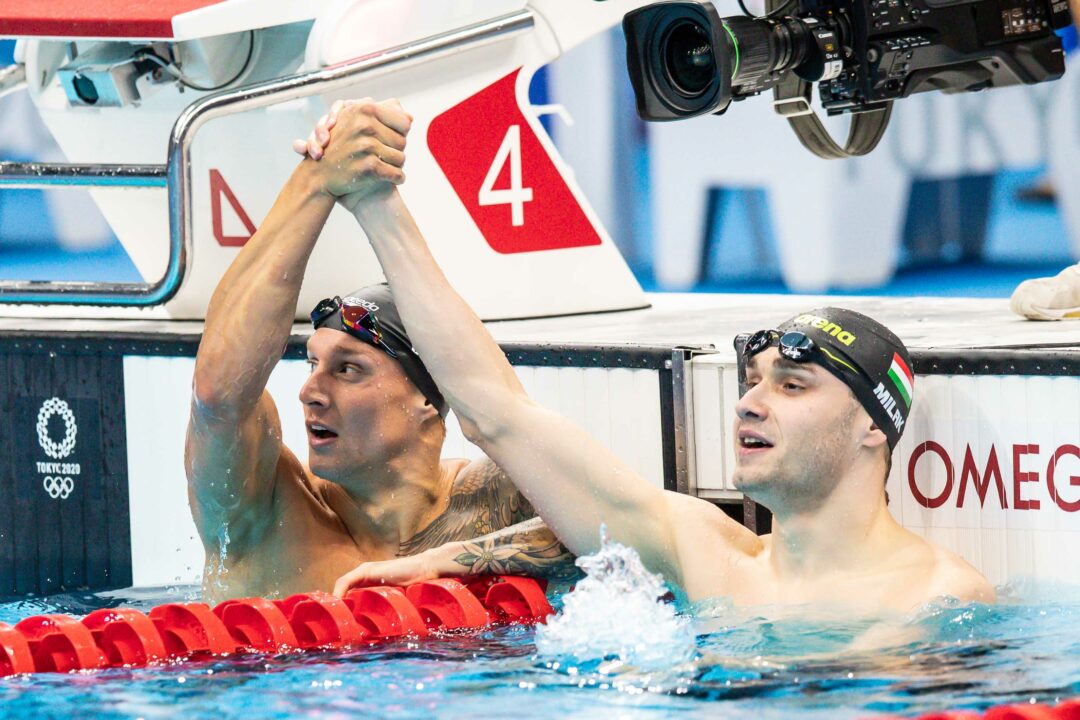 Caeleb Dressel has been absolutely dominant in the 100 fly since 2017, yet Kristof Milak nearly ran Dressel down in the 100 fly final at the Tokyo Olympics. Current photo via Jack Spitser/Spitser Photography

Clash of the Titans

Caeleb Dressel may be the two-time defending World Champion in the 100 butterfly, the world record holder and the reigning Olympic gold medalist, but that doesn’t give him any room to rest on his laurels, as Hungary’s Kristof Milak proved in the final of the 100 fly in Tokyo last summer.

Dressel has been absolutely dominant in this event since 2017, yet Milak, the world record holder and reigning Olympic and world champion in the 200 fly, nearly ran Dressel down in the last 25 meters of the 100 fly final at the Tokyo Olympics. In fact, Dressel and Milak represent the two fastest men ever in the 100 butterfly, with personal bests of 49.45 and 49.68, respectively. For context, the third-fastest man of all time, Michael Phelps, has a career-best of 49.82.

Dressel, who commands the first 50 meters of the race, is also the second-fastest man all-time in the 50 fly with a lifetime best of 22.35, second only to Ukrainian Andrii Govorov (22.27). Milak, meanwhile, holds the world record in the 200 fly with a 1:50.73, with the next fastest being a super-suited Phelps at 1:51.51 from 2009—a performance done in the polyurethane-paneled Speedo Fastskin LZR Racer legskin suit.

Though Dressel set the world record last summer in Tokyo, he was both long on the turn and the finish, while Milak swam a near-perfect race. However, Milak did not flex his true potential in the 200 fly earlier in the meet due to a last-minute suit rip minutes before the final. Though he still won gold and erased Phelps’ 2008 Olympic Record, he failed to crack the 1:51 barrier and his own world record. Needless to say, both men have something to prove in Budapest, and both have room to improve upon their Tokyo performances, in one way or another. Dressel split a monstrous 49.03 on the men’s 4 x 100 medley relay, so the ability to swim under 49.45 appears to be there, the question is, how much ground can Milak make up in those final 25 meters (and will the gap be too big to overcome)?

Matthew Temple won the Australian Trials in the men’s 100 fly, leaving silver to freestyle specialist Kyle Chalmers. Temple is tied as the fourth-fastest textile performer in history, behind the likes of Dressel, Milak, and Joseph Schooling, with a 50.45, a distinction he holds alongside none other than Michael Phelps. Chalmers, meanwhile, boasts a lifetime best of 51.37. While Temple is undoubtedly a butterfly specialist, the 100 fly is essentially a “third event” for Chalmers, who has never seriously pursued the race on the world stage.

Last summer in Tokyo, Temple clocked 50.92 to tie for fifth with Poland’s Jakub Majerski, though if he had equaled his best time he would have won bronze. Chalmers, meanwhile, won the silver medal in the 100 freestyle, a mere 0.06 behind gold medalist Dressel.

Australia has seemingly always had one ace 100 butterflier, but rarely two. With Chalmers having no other individual events besides the 50 fly, perhaps this will be the first time since 2001 that Australia has put two men (Geoff Huegill and Michael Klim) into a championship final in the men’s 100 fly at a LCM World Championships. It is unlikely, however, that Chalmers will be able to get as close to Dressel in the 100 fly as he has in the 100 free, where the two men are near equals. Dressel’s world record is a full 1.92 seconds faster than Chalmers’ lifetime best. Regardless, it will be interesting to see Chalmers pursue a race he has always kept on the backburner.

Japan on the Rise

Mizunuma became the first Japanese swimmer ever to crack the 51-second barrier in the LC 100 fly earlier this year with his National Record of 50.86. In fact, the only Asian swimmer in history faster than Mizunuma in this event is 2016 Olympic gold medalist Joseph Schooling, who set a mark of 50.39 en route to gold in Rio.

2020 Tokyo Olympic bronze medalist Noe Ponti could prove himself a staple on the world stage in this event by medaling again in Budapest, though an exact repeat of the Tokyo podium seems like a stretch, especially given the depth of the field.

The recently-turned 21-year-old has been racing a lot this season, hitting 51-point on seven separate occasions since March. Having also shown a strong ability in the 50 (numerous 23-mids) and the 200 (nearly hitting his best in 1:55.4) over that span, the Swiss native appears to be on track for a monster 100 fly in Budapest.

Team USA’s Michael Andrew has proven himself as one of the most versatile swimmers in the world since 2018, though he has not focused on the 100 fly much outside of FINA World Cup events. Even so, Andrew has a lifetime best of 50.80 from early 2021 and a season-best of 50.88 from the 2022 U.S. World Trials. Andrew scratched the 100 fly at the 2021 Olympic Trials, though had he chosen to race it his chances of qualifying second seemed as good as anyone else’s, despite his heavy program.

South Africa’s Chad le Clos has been a stalwart of the 100 fly since the 2012 London Olympics, though he has lost some of this footing on the world stage since tying for the silver medal at the 2016 Rio Olympics. It would be odd not to include le Clos in this breakdown, though his chances of claiming another medal are slim, and he’ll need a great semifinal performance to make the final. Le Clos failed to final in Tokyo, tying for 18th in the prelims, though he claimed the bronze medal at the 2019 World Championships after failing to make the championship final in 2017.

2020 Olympic finalists Jakub Majerski, Luis Martinez, and Josif Miladinov proved their quality in Tokyo last summer, though they have now have stiff competition from Canada’s Josh Liendo, who recently broke the Canadian National Record with a 50.88 in April.

Meanwhile, Britain’s James Guy will make a return to the 100 fly after scratching the race in Tokyo in order to focus more on the relays. Guy boasts a lifetime best of 50.67 from 2017, and in Tokyo last summer he contributed an incredible 50.00 relay split on Great Britain’s mixed medley relay, as well as a 50.27 split on the men’s medley relay. The mixed relay would win gold while the men’s relay would win silver behind the Americans. Needless to say, James Guy is a serious threat in this event despite his absence from the race in Tokyo.

Majerski, meanwhile, put up a season-best of 51.37 at the Polish Open in early May, making him the 12th-fastest in the world this year, though it’s worth noting that of the 11 men ranked ahead of him, four are American, and only two of them will swim the race in Budapest (Dressel and Andrew), meanwhile another, Petr Zhikharev, is Russian, which ranks Majerski eighth in the world among Budapest entrants. We haven’t seen much out of Martinez or Maldinov this year, though their quick ascension to the Olympic final last summer means they could again disrupt the championship final in Budapest.

2019 silver medalist Andrei Minakov will also be absent from this race. Minakov is the Russian National Record holder and he placed fourth last summer in Tokyo. Minakov had a huge NCAA season and would be in contention for a spot on the podium were Russian athletes not banned from competing at the World Championships this summer.

Dark Horse: Youssef Ramadan of Egypt has established himself as a dominant sprint butterflier over the past two years. In the NCAA, Ramadan became just the 5th man ever to swim sub-44 seconds in the 100-yard butterfly. In long course, Ramadan has a lifetime best of 51.67 from the 2020 Tokyo Olympics, an effort that tied Ramadan for 14th going into the 16-man semifinals. In the semis, Ramadan added time to place 16th in 52.27.

I would never underestimate Milak

With Dressel out, Milak is going to make a statement winning in a WR time

ICU is a troll. They started posting about a month ago. They pretend to be Australian and then constantly make absurd, ridiculous remarks and predictions. I assume they’re doing it to annoy people and make Australians look bad? It’s really sad.

They are clearly a troll trying to make Australians look bad

Swap Chalmers for Dressel and you might be close

I’ve thing I think of going to happen is that it’s going to take a WR to win this. If Caeleb nails that start, turn, and finish he wins it but if he botches the turn, and long finish, then it could be a MP V Cávic situation but I’m confident that Caeleb has worked on his placement of where he wants his strokes in the race.

Small quibble… wouldn’t Ian Crocker’s 2005 50.40 be considered textile? Might have been in a legsuit, not sure, but that was still pretty well before the polyurethane started showing up.

27
-1
Reply
HJones
Reply to  JP input is too short

100% textile. Anything 2007 and before is fair game, since those old FSIIs and FSPros are inferior to modern jammers, regardless of their coverage.

3
0
Reply
swimswim4
Reply to  JP input is too short

Ian Crocker is always overlooked when discussing the history of the 100 fly but he was the og Phelps rival, and may have beaten Phelps in Athens had he not been sick for the first half of the week. He was a little jumpy on relay starts, but always had a reliably fast 100 fly to throw down, to the point where Phelps let him take the finals medley relay spot in 2004.

If I’m not mistaken, Phelps still considers that 2005 Montreal World Championships 100FL (Crocker 50.40, Phelps 51.65) to be his “worst in-shape beatdown.” I believe that terminology excludes his 2012 400IM given that he knew he was out of shape for that race.

Eh, that same year he didn’t even make the final in the 400 free so, that’s probably worse.