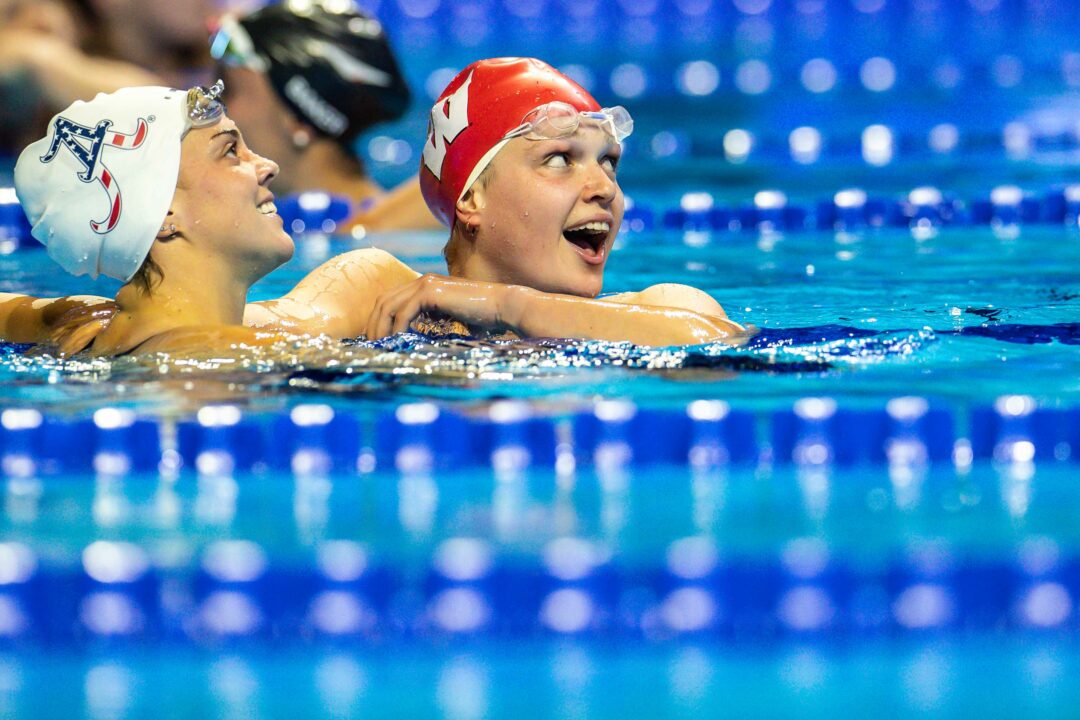 Michigan senior Olivia Carter took home her 3rd consecutive Big Ten title in the 200 fly tonight in Madison, pulling away from the field on the back half.

Ohio State’s Amy Fulmer is the top seed in the 100 freestyle ahead of defending champion Maggie MacNeil of Michigan. The two will battle it out tonight.

Based on this morning’s scored prelims, Michigan would have scored 0.5 points more than Ohio State. Ohio State currently holds a 67 point lead over Michigan.

Day 2 finals are here, and with it, we’ll see the first individual points of the 2022 Women’s B1G Champs scored. Tonight’s action will feature the 500 free, 200 IM, 50 free, 1-meter diving, and the 400 medley relay. Based off this morning’s prelims performances, we’re projecting a very tight battle to develop between Ohio State, Michigan, and Indiana tonight in team scoring.

This morning’s 500 free was closely contested, with Wisconsin freshman Paige McKenna taking the top seed for tonight with a 4:40.31. Northwestern’s Lola Mull, who has been swimming very well in the past month, was right behind in 4:40.80. She was 5th at the 400 yard turn, but a best-in-field closing 100 yard split of 54.22 pulled her up to 2nd.

Tonight’s A final is an unusually young field, featuring all underclassmen (freshman or sophomores).

Conversely, the 200 IM A final is made up almost entirely of seniors and 5th years. Megan Van Berkom, the top seed for tonight (1:55.87), is one of two sophomores in the field. Wisconsin’s Phoebe Bacon (5th seed) is the other.

Michigan’s Maggie MacNeil took the top spot in the 50 free this morning with a 21.60. She was just a tick off her season best of 21.50 with her prelims swim today. The defending champion and 2021 B1G Swimmer of the Meet is the heavy favorite tonight, but both Northwestern’s Jasmine Nocentini and Ohio State’s Amy Fulmer were under 22 seconds this morning as well.

In field consisting entirely of freshmen and sophomores, Wisconsin sophomore Paige McKenna led the race wire-to-wire, although the lead got extremely tight at points. McKenna’s lead was at its biggest at the 200 turn, where she clocked a 1:48.95, and was the only swimmer under 1:50 in the field. Michigan’s Kathryn Ackerman made a move in the middle of the race, but faded on the final 100.

Ohio State’s May Geringer made a strong push to briefly sit in 2nd towards the end of the race, but Northwestern’s Lola Mull made a hard push on the closing 150 yards. Mull would take over 2nd on the final length of the race, touching just under a second behind McKenna.

The win was critically important for the hosting Wisconsin Badgers as well, as following the 500 free, they are now tied with Ohio State for 1st in team scoring. Wisconsin was also helped by a B final victory by Emily Ecker (4:42.45).

Ohio State’s Kristen Romano put up a gutsy performance in tonight’s 200 IM A final, leading the race from start to finish. The Ohio State school record holder took the race out with a 24.76 fly split, then tacked on a 28.02 backstroke split, which was even faster than Olympic backstroker Phoebe (28.80). Romano was able to maintain her lead through breaststroke, and although she was out-split by several swimmers in the field on free, her lead was too much to be overcome.

Megan Van Berkom, a Minnesota freshman who finished 35th in this event at Big Tens last year, was creeping up on Romano on the final 50, and touched 2nd. Phoebe Bacon was 3rd, and Indiana had a strong showing, with Mac Looze (1:55.68) and Noelle Peplowski (1:55.88) taking 4th and 5th respectively.

Michigan freshman Letitia Sim won the B final in 1:56.31, a time which could potentially earn her an invite to NCAAs, and also would have been good for 6th in the A final.

As she took her first stroke, there was little doubt Michigan’s Maggie MacNeil was well on her way to winning yet another Big Ten title. MacNeil had the fastest reaction time on the start and the best underwaters in the field, breaking out shoulders ahead of field. She touched in 21.32, her fastest of the season, and just off her personal best of 21.17, and the Big Ten meet record of 21.28.

Michigan also grabbed a 4th place finish from freshman Lindsay Flynn (21.94), dipping under 22 seconds for the first time in her career.

Ohio State had another strong showing, taking 2nd with Amy Fulmer, and 5th with Katherine Zenick (21.96).

The transfer of Jasmine Nocentini from FIU to Northwestern continues to pay dividends for the Wildcats. Nocentini touched 3rd with a lifetime best of 21.78, clipping her previous best of 21.92.

NCAA diving star Sarah Bacon was at the absolute top of her game tonight, putting together 6 phenomenal dives to claim yet another Big ten title by a truly massive 35-point margin of victory. Bacon saved her best dive for last too, scoring 66.30 points in round 6, which was the highest scoring dive of the event. The performance also broke the championship record.

Minnesota’s Joy Zhu also made it into the top 3, coming on strong in the final two rounds.

The event was huge for IU, as they had 2nd, 4th, 5th, 10th, and 16th place finishers in 1-meter diving, racking up 109 points for the team. Indiana now sits just two points behind Ohio State as we head into the final event of the night: the 400 medley relay.

The Ohio State Buckeyes have now won all 3 of the relays that have been competed so far at these championships. They pieced together a 3:26.35 tonight, dipping under the Big Ten meet record, and shattering the Ohio State program record, which stood at 3:29.39.

Amy Fulmer, who finished 2nd in the 50 free earlier tonight, was exceptional on the anchor leg of this relay, throwing down a blistering 46.56 split to seal the deal. Hannah Bach was also remarkable on the breaststroke leg, splitting 57.07. Emily Crane clocked a 51.79 on the back leg, and Katherine Zenick provided a 50.93 fly split.

Ohio State, Michigan, Northwestern, and Wisconsin, who won the 2nd heat in 3:30.66, all were under the NCAA ‘A’ cut in the event, automatically qualifying for NCAAs.

Rutgers having a good showing in the bottom half competition. Sitting in 7th after one of their weaker days when swimswam had them picked for 11th. Keep it up, Knights!

I love her music