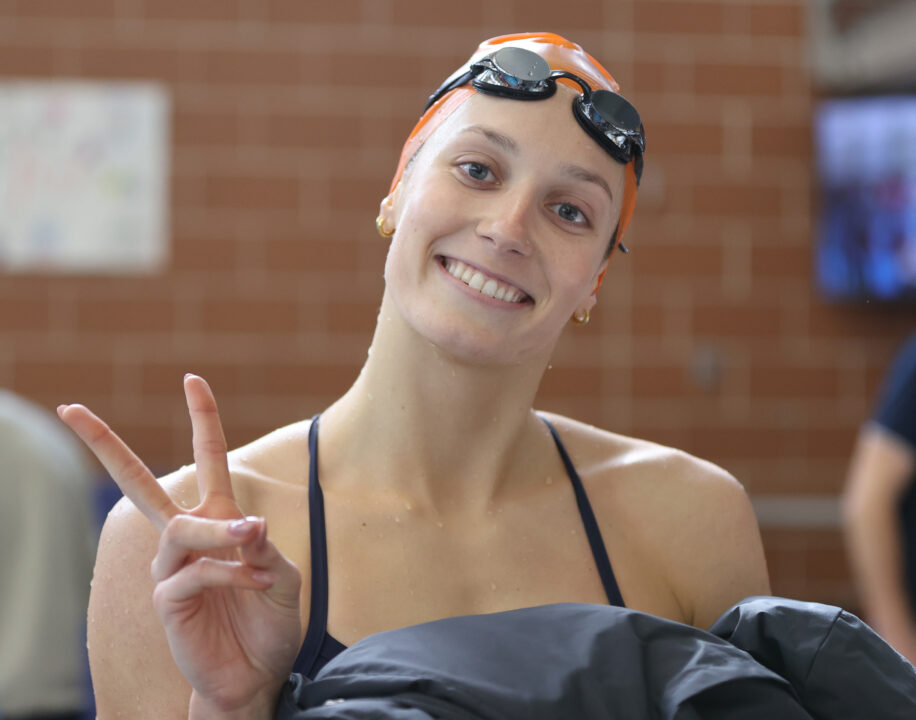 7 of last year's 8 A finalists are entered into the field again, but the top 2 seeds were not members of the A final last year, which may speed things up. Archive photo via Matt Riley – UVA Communications

Last year’s final of the 200 butterfly only featured one senior, and all seven returning swimmers are entered into the event this year. Interestingly enough, though, in spite of that returning depth, both of the top two seeds were not in the A final last year.

Highlighting as an addition to the meet is Stanford freshman Regan Smith. Smith won silver in the long course version of the event at the 2020 Tokyo Olympics. She is the top seed in the event after swimming a time of 1:50.99 to win Pac-12s. The biggest difference between Pac-12s and NCAAs will be that she is taking on the 200 backstroke and 200 butterfly double. Both occur on the last day, and the butterfly is after the backstroke.

Making huge moves from last year is Kentucky senior Riley Gaines who finished 22nd in the event last year with a time of 1:56.21. This year, Gaines has already been much faster as she is seeded with a time of 1:51.51 which she swam to win SECs. Gaines has already been a successful 200 freestyler as she was sixth in the event at NCAAs last year, so this the 200 butterfly is a new breakout event for her.

Defending champion Olivia Carter of Michigan has been one of the big names in the event over the last couple of years. In her freshman year at Georgia she was seventh in the event, she was seeded seventh in 2020 before the meet was canceled due to COVID-19, and then won the event last year as a junior. At this year’s B1G’s, she was faster than she was at the meet a year ago, which may be able to put her slightly faster than she was at NCAAs last year as well.

Georgia’s Dakota Luther has been a consistent butterfly force in her time at Georgia. She was ninth as a freshman in 2019 and third as a junior in 2021. That trend is promising for her as well as her trend in SEC time as that time has gotten faster each year.

Virginia’s Alex Walsh enters the mix this year after not swimming the event at all in her freshman year. She has already dropped over six seconds from her previous best of 1:58.10 from 2019 to be seeded fifth with a time of 1:51.83 which she swam at midseason. She did not swim the event at ACCs so she might have the possibility to swim much faster.

Last year’s runner up Olivia Bray of Texas did not race the event at conferences so she may also have a little bit more in the tank than her seed time of 1:52.14. Last year she was second in a 1:52.87.

Teammate Emma Sticklen won the event at conferences in a 1:52.82 but was just off of her best time of 1:52.47 which she swam at midseason. These times are all under her previous bests as she hadn’t been under 1:53 prior to this season.

Megan Van Berkom of Minnesota has already made huge drops this season going from a 1:58.13 last season to a 1:53.89 this season. She competed in the event last year as a freshman so she has some experience under her belt. The way she improved from last season to this season, she has the potential to make the A final here.

Darkhorse- Sydney Harrington (Navy) Harrington was seeded ninth going into last year’s meet with a 1:53.74 and finished 16th with a time of 1:57.04 in finals. Her 1:53.74 was from a dual meet against Loyola-MD at the end of February 2021 as the Patriot League did not have a championship meet last year due to COVID-19. She could make some waves if she is able to replicate or surpass that dual meet time.

the lack of UF reporting is showing!!!

no Amanda Ray? Her time improvement over the past few years proves she always swims at the level provided for her. I think she could be a sleeper agent who surprises us all to make a crazy appearance in the A final. 200 fly is her bread and butter.

Anything is possible! But swimmers who go PBs at last chance meets don’t usually drop another second at NCAAs. I think next year might be her year.

Totally see where you’re coming from, but her resilience this season has been unreal. Truly believe she could be our dark horse. no doubt this comment section will fire her up!

If Brendan Burns chose the 2back/2fly double at NCAAs it wouldn’t be a sure thing to make the A final in both swims. Burns would have to race really hard in the morning. Smith doesn’t have this problem; she can… Read more »

I don’t understand why people freak out about double events. When these athletes were age-groupers they would swim double or triple of what they swim today. If you can’t do anything hard for less than 2mins get out. Regan gunna say bye Feliciaaaa

I freak out because my old ass can barely handle two 50’s at the same Master’s meet, it’s mind boggling to me that a woman can possibly go two 1:49’s in a 200 back/200 fly within 20 minutes of each other

My Masters coach was really into winning meets so he made most people swim the max number of events and would put you on all relays if you didn’t advise him to do otherwise. Once that resulted in 16 swims for me over 3 days (incl. 7 swims on the Saturday). The only thing that saved me was the consumption of ridiculous amounts of carbs throughout the weekend haha. It was insane!

Same happened to me. Then decided to go the unattached route.

Why would anyone let a masters coach dictate what events you swim?

It will be close but I think Regan has this one!

Interesting to not include Kelly Pash on here. She was top 8 last year and has been 1:52