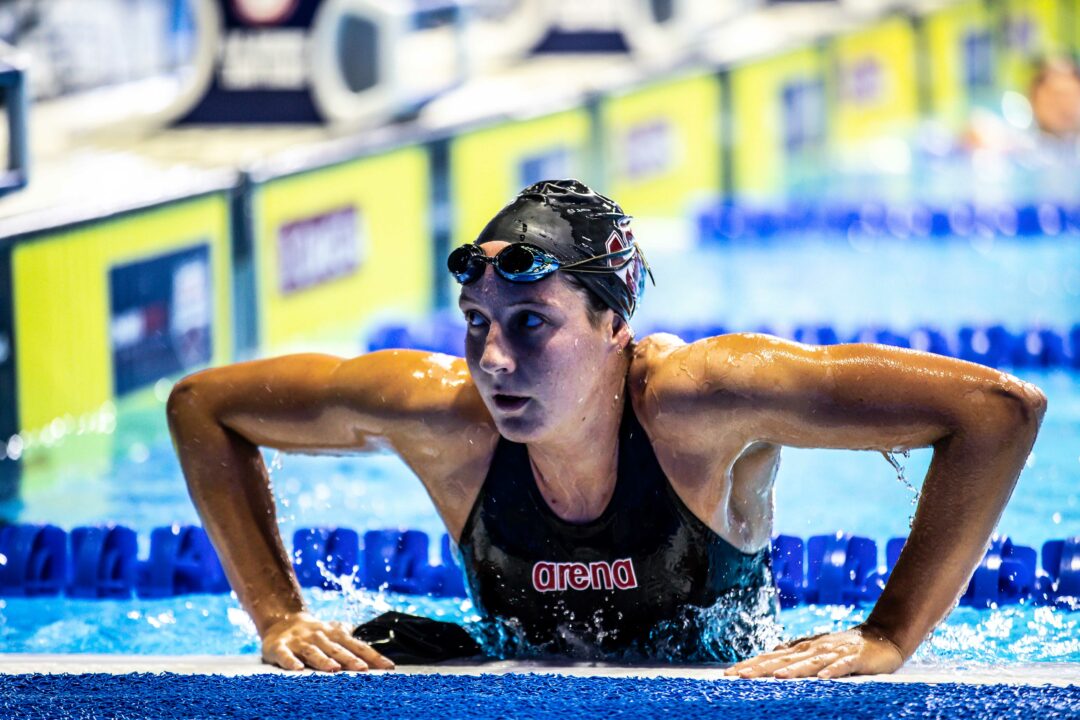 Last year a 4:39 got Sierra Schmidt 4th place in the 500 freestyle at NCAAs. This year a 4:39 might not even be a top 8 swim. Current photo via Jack Spitser/Spitser Photography

It’s Lia Thomas of Penn and Emma Nordin of ASU who hold the only sub-4:35 times in the NCAA this season. Thomas swam a 4:34.06 at the 2021 Zippy Invitational, while Nordin posted a 4:34.87 at the NC State GAC Fall Invitational.

Both of them raced the event at their respective conference meets. Thomas won the women’s 500 freestyle at the Ivy League Championships in a 4:37.32, while Emma Nordin took 8th place for ASU at Pac-12s with a 4:44.63 after swimming a 4:41.16 in the prelims. A 4:34 should get one close to the podium this year, meaning that if Thomas and Nordin can get back to where they were in the fall, they should be fighting for a spot in the top 3.

Nordin would have been the 500 free favorite at last year’s NCAA Championship meet had Arizona State not redshirted their team for the entire season, so she’ll have to recapture that momentum.

The only returning medalist from the past 2 NCAA Championships this year is Stanford’s Brooke Forde who won the national title back in 2019 and earned bronze in 2021. After opting out of the event at Pac-12s this year, Forde is set to race one of her signature events at the big meet.

Forde has the strongest track record in this field, having thrown down a monster swim of 4:31.34 3 years ago to win NCAA gold. Forde will be tough to beat if she’s on par with her past self and she’s our pick to win the title.

The newcomer in this field of 500 freestylers is Tennessee freshman Julia Mrozinski from Tennessee who will be looking to make an immediate impact at her first-ever NCAAs. With her SEC title-winning 500 freestyle of 4:35.95, Mrozinski became the 3rd-fastest woman in the NCAA this season and the fastest one thus far in 2022.

Mrozinski has a shot and shaking things up from last year when no freshman qualified for a second swim in this event. At 2021 NCAAs, the highest-finishing first year was Florida’s Elise Bauer who finished in 19th place with a 4:43.94.

Following the top 4 of Thomas, Nordin, Forde, and Mrozinski, Emma Weyant of Virginia is the 5th seed with a 4:37.23, which she used to win gold at ACCs. The Olympic medalist in the 400 IM is, like Mrozinski, a freshman and will make her NCAA debut this year. Weyant will need a PB by a few seconds in order to break into the top 3, but considering her drop from a 4:39.18 down to a 4:32.76 last season in the long course 400 IM, and upset from Weyant isn’t out of the question.

To round out the freshman discussion, Texas’ Erica Sullivan is sitting quietly in 14th place with a 4:39.46. She swam that time at Big 12 Championships, but has actually been much faster than that before and holds a PB of 4:34.07 from 2021. Like Weyant, Sullivan got a silver medal at the Tokyo Games (in the 1500 freestyle) and once she hits her full taper next week will be a definitive challenger for the gold medal.

Sullivan’s teammate Evie Pfeifer is ranked even lower in the 500 freestyle here, holding a season-best of 4:39.92 to make her the 17th seed. Pfeifer won silver in the event at last year’s NCAAs, having swum a 4:35.02 to out-touch bronze medalist Brooke Forde (4:35.22). As a 5th year, she’ll have a shot at going out strong this year as she attempts to qualify for her 4th-straight NCAA final.

What’s notable about the remaining field is that 2 of last year’s finalists, Ayla Spitz from Cal and Sally Tafuto from Ohio State, find themselves outside of the top 8 in the psych sheets as well. Spitz has the 22th-best time with a 4:40.89 and Tafuto is #20 in a 4:40.49. Last year they finished 5th and 7th, respectively with a 4:39.70 and 4:40.29. That’s an indication of the fact that although they’ve been near their times from last year’s NCAAs, it may not be enough to crack the top 8 again considering how many sub-4:40 swims we’ve seen this year.

There are 12 women between a 4:38.09 and 4:39.92 in the psych sheets, meaning that it could take a sub-4:40 to even get a second swim in this event. With a number of women who have been faster in seasons past and an influx of freshman speed, the 500 free looks like one of the biggest question marks of the meet.

Do we have any info on live stream yet?

You can disagree with the decision to allow LIA to swim but you don’t have to voice your transphobia against LIA.

So? There are multiple 24 and 25 year olds just on page 1 of the psych sheet?

Thomas had less reason than any contender to get significant rest for conference. Even if you disagree with her competing, seems likely that she’ll be faster than mid-season