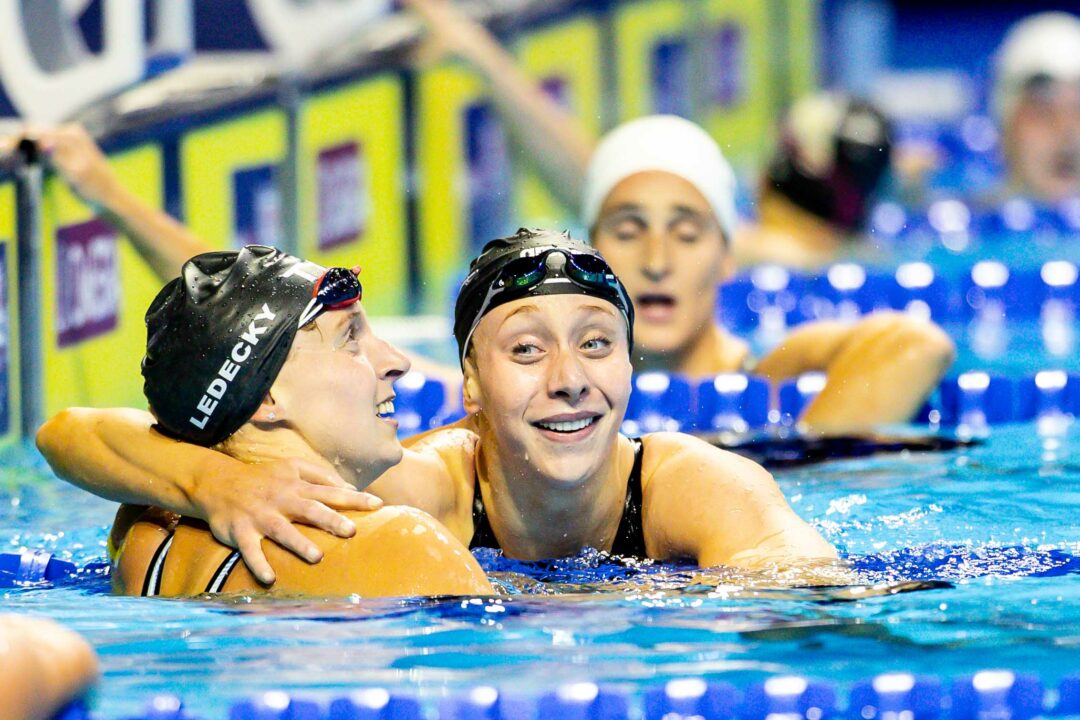 Paige Madden is the front-runner for the second individual spot in the women's 200 free behind Katie Ledecky, but there is no shortage of contenders. Archive photo via Jack Spitser/Spitser Photography

Last summer in Tokyo, the American women swam an incredible race to grab silver in the 4×200 free relay in a time of 7:40.73, going under the existing world record as China swam the fastest time ever for gold. However, three out of the six swimmers that were selected to swim the relay last year (Allison Schmitt, Katie McLaughlin, Brooke Forde) will not be swimming in this year’s U.S. trials. Because of this, the women’s 200 in Greensboro this week will be wide open for new swimmers to make the team.

It seems like for every 200/400/800/1500 free article, the distance GOAT needs an entire section to herself because she’s just that dominant. For Katie Ledecky, making the worlds team in the 200 free isn’t a matter of if, it’s a matter of how.

By Ledecky’s standards, her performance in this event was a bit of a disappointment last year. Coming in as the 2016 Olympic champion, she finished 5th in Tokyo Olympics with a time of 1:55.21 to miss the podium in an international meet for the first time in her career. To rub more salt into the wound, she went faster at the 2021 Olympic Trials and at a TYR Pro Swim Series meet last April. However, Ledecky came back a day later to drop a scorching 1:53.76 anchor split on Team USA’s 4×200 free relay, leaving us wondering if she can get back into the 1:53 range once more.

After the Olympics, Ledecky moved from her college training base of Stanford to train under Anthony Nesty at the University of Florida with the likes of Kieran Smith and Bobby Finke, two of the best men’s mid-distance and distance freestylers in the country.

Ledecky’s best time since her move to Gainesville is a 1:54.66 from an Orlando sectionals meet in February. And while that time is faster than what she went at the Olympics, she has consistently had the problem of going super fast in-season and not being able to drop at big meets. It will be interesting to see whether her new training base will be able to change the way she tapers coming into trials and worlds this year.

….and The Battle Behind Her

We all know Ledecky is the obvious favorite to win this race. But the fight for the spots behind her is where things start to get interesting.

Paige Madden finished third at trials last year with a personal best time of 1:56.44, and split 1:55.25 in Tokyo on the 4×200 relay, the second-fastest of the Americans. She posted a very respectable in-season time of 1:57.12 at the San Antonio Pro Swim Series stop and is seeded second on the psych sheet. She won her first individual international medal at the 2021 Short Course World Championships when she placed third in the 200 free in1:53.01, and is the favorite to finish second behind Ledecky and race this event individually at an international meet for the first time.

Smith topped the prelims at the 2021 trials in 1:57.52, but added in finals to finish eighth (her prelims time would have been fifth in finals). Having recently moved to Texas to train under Carol Capitani, she’s been 1:58 a few times in-season but is still a ways from her lifetime best of 1:55.97 from 2017.

Margalis also switched training locations, going from Georgia’s pro group to train at Georgia Tech. She is seeded 13th with the 1:58.75 time that she swam last May, but has been as fast as 1:56.84. She isn’t entered in the 400 IM, her best event, so the 200 free might be her best chance of obtaining a Worlds berth.

Georgia alumni and ASU training partners Hali Flickinger and Olivia Smoliga are also ones to watch. Flickinger has been on fire recently, posting very strong times in her core events of the 200 fly and 400 IM. She’s seeded 10th and has only swum the event once this year, clocking a 1:58.90 at the San Antonio Pro series, but look to see her crack top 8 if she carries the same momentum she had in-season into trials. Smoliga is seeded third, holding a best time of 1:57.04 from May 2021. This year, she has yet to break two minutes, holding a season-best of 2:01.48. She didn’t swim this event at trials last year, so if she swims it this year and doesn’t scratch, it will mark her first time swimming it at a major taper meet. The 200 free falls on the same day as the 200 back, another event she is entered in, but given the competition in American women’s backstroke, it might be safer for her to pick the freestyle event.

Michigan pro Gabby DeLoof is seeded seventh with a 1:57.86, which was exactly how she placed at trials last year in this event to just miss the Olympic team. Like Smoliga, she has yet to break two minutes this season, but if she goes a near best time, it will be good enough to finish top 8.

Sixteen-year-old Bella Sims comes in as the fifth seed. She set a best time of 1:57.53 at Olympic trials last year to qualify and then proceeded to lead off USA’s 4×200 free relay in the prelims of the Olympics with a time of 1:58.59. Sims is coming off of a strong yards season in which she swam the top time in the country in the 500 free (faster than anyone at the NCAA championships), and is looking to carry that success over into meters. Her Sandpipers of Nevada teammates, Katie Grimes and Claire Weinstein, are also entered in this event, but both of them are stronger in the longer distance races.

Another swimmer who shouldn’t be ignored is 17-year-old Erin Gemmell of the Nation’s Capital Swim Club. She is the daughter of Ledecky’s former coach, Bruce Gemmell, and goes to the same high school that Ledecky graduated from, Stone Ridge High School. She’s seen rapid improvements in her 200 free, recently clocking a 1:57.41 at the Indianapolis Speedo Sectionals. That time ranks her fifth all-time in the 17-18 age group, and is a drop of nearly a second from her previous best tie. Gemmell is currently seeded third on the psych sheets, and looks to carry on Ledecky’s legacy by gaining a spot on the Worlds team.

Stanford swimmer Torri Huske finished 11th at the Olympic trials last year with a time of 1:59.27, but was over a second faster last April when she swam her personal best time of 1:58.09 which has her seeded eighth. She recently broke 1:42 in yards for the first time leading off of Stanford’s NCAA-winning 800 free relay, clocking a time of 1:41.93. Another NCAA star, UVA’s Alex Walsh, is entered as the 33th seed. Walsh hasn’t swam the 200 free long course at a major meet since 2018 Junior Pan Pacs, when she went a 2:00.79 that still stands as her best time. She won an ACC title in the 200 yard free with a time of 1:42.28 and split 1:41.63 on UVA’s 800 free relay at the same meet, but did not swim the event at NCAAs. That being said, given how well her college season went, we could potentially see her drop a lot of time this week. Walsh’s teammate Emma Weyant finished 19th at trials with a 2:00.30, but holds a best time of 1:58.10 from 2018 when she was in high school.

Dark Horse: Anna Moesch – The 16-year-old dropped massive amounts of time in this event this season in yards, going from a 1:51.21 to a 1:44.10. Although she swam at Olympic trials last year, she didn’t swim the 200 free in particular, meaning we could be due for a big drop from her in meters. She is currently seeded 36th, and holds a long course best time of 2:03.17.

Where is Katie McLaughlin? Maybe I missed an article?

she’s not on the psych sheets.

Huske Walsh Smoliga all very interesting and capable down there at 6-7-8 in your predictions. One of them will swim well, and 2 of them will blow up. Just don’t know which one.

This one will go to Grimes.

She arrived in Greensboro wearing a boot. No idea what her injury is or if it will impact her swimming.

Nobody has really gone on and said, but I’m reading between the lines here. I get the feeling that she got injured during quarantine. She didn’t go into it but she did state that she got a knee injury on the swimswam podcast during 2020, and following tinting the next year, she raced very little in the spring. Her times stayed the same pretty much (not improving but not going very far backwards). But after trials, she really only raced at World Cup and NCSA’s and that’s it. She was off the roster for juniors in December, wasn’t at the Speedo sectionals in March, wasn’t at OW nationals, is off the high school psych sheet this year, and is now… Read more »

I’ve figured out the problem with American “bathtub” (25y) swimming and how it could be resolved.

Most people don’t go 15y underwater on anything more than a 100.

it’s interesting you say SCY is a “problem” yet the US is still the fastest country in the world. we must be doing something right.

It’s in spite of it, not because of it. Per capita wise the US is definitely underperforming compared to Australia or Canada or Hungary.

Per capita comparisons don’t make sense when there are limitations on the number of qualifiers per country. HTH.

Honestly I’ve thought for a while that the best parallels between SCY and LCM freestyle events have been the 200 SCY to the 100 LCM, and the 500 SCY to the 200 LCM

where is Allison Schmitt?

Not officially retired, but taking a break.

It is very possible that this year W4x200 relay will look like last year 4x100FR.
US women 200FR is very deep but with average level performers. I don’t think there is no talents around but for some unclear reason nobody likes this event to focus exclusively on it.