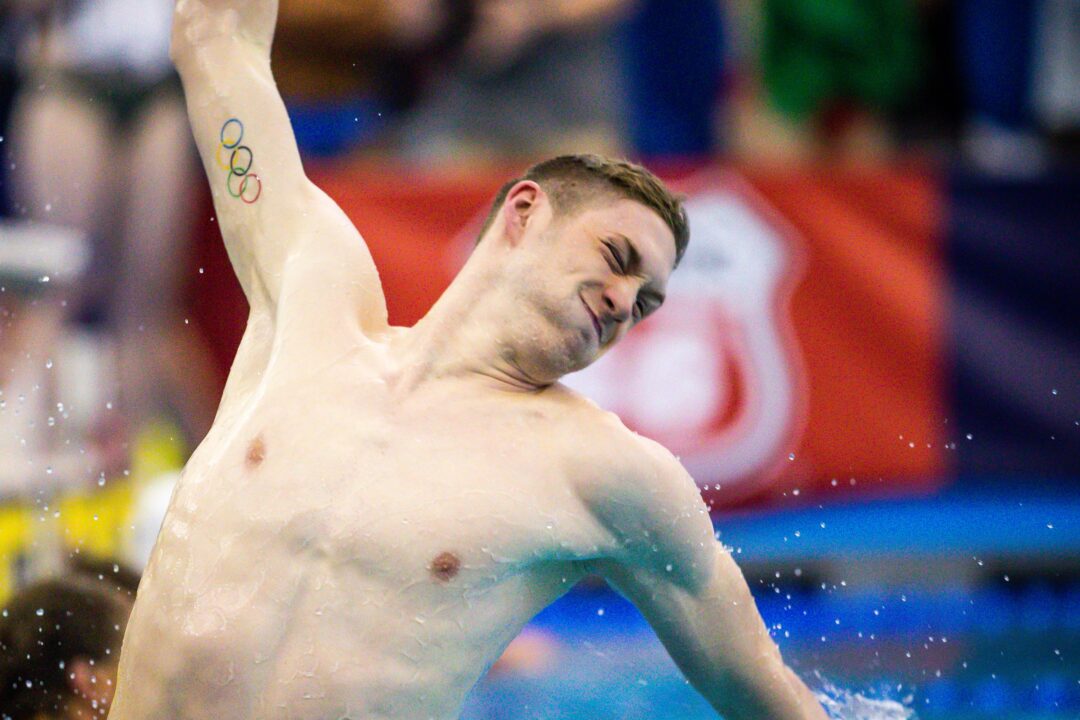 Hunter Armstrong, the newly minter World Record holder in the 50 back, and a pack of other stars look to unseat Ryan Murphy in the 100 back. Current photo via Jack Spitser/Spitser Photography

It’s Day 4 and the penultimate finals session at U.S World Trials. We’ve got the 400 free, the 100 breast, and the 100 back on tap, all of which have some incredibly close races brewing.

We’ll kick off Day 4 finals with the 400 free. For the women, we’re preparing for two races. The first is Katie Ledecky versus the clock. After getting back under 8:10 in the 800, what will she go here?

The other is the race for second. Leah Smith swam away from her heat to qualify second in 4:04.83, which gives her an almost five second buffer over #3 seed Bella Sims. But the Sandpipers have shown that we should never count them out, and there are three of them to factor in here. Joining Sims are her teammates Claire Weinstein and Katie Grimes, already qualified in the 200 free and 400 IM, respectively.

200 free winner Kieran Smith is the favorite in the men’s 400. He’s running fourth with teammate Trey Freeman and Longhorns’ Luke Hobson and Coby Carrozza ahead of him. After prelims, these four are separated by .44 hundredths of a second. Look for Hobson and Carrozza to take the race to the Gators; if they want to secure a Worlds berth, they’ll need to get under the 3:48.15 FINA ‘A’ cut and outtouch Freeman.

Lilly King looks to sweep the breastrokes tonight by adding a win in the 100. She has tough competition though, also in the field is her training partner Annie Lazor and Olympic champ Lydia Jacoby, both of whom have yet to secure their ticket to Budapest. Don’t count out Alex Walsh or Kaitlyn Dobler either.

Michael Andrew and Nic Fink were the only two men under a minute in prelims of the 100 breast. They’ll be the men to beat but Rio Olympian Cody Miller and co-200 breast champion Charlie Swanson will look to play upset.

The night ends the 100 backstrokes, which are shaping up to be as brutal races as they usually are.

Regan Smith defended her top seed this morning with a 58.29, but there’s a deep field chasing her. She’ll have to fend off Katharine Berkoff, Rhyan White, and Phoebe Bacon, who have already beaten her in backstroke this week. Then there’s teen titan Claire Curzan and two-time Olympian Olivia Smoliga, who could both sneak in for a top 2 finish.

The American women’s backstroke depth is rivaled only by the American men, and with six men under 54 seconds in prelims, we’ve got a thrilling men’s 100 back to end the session. Justin Ress leads the pack with a 53.10, but this is still anyone’s race. Also in the hunt is World Record holder Ryan Murphy and the new World Record holder in the 50 back, Hunter Armstrong. Shaine Casas holds the #3 seed with a 53.31, and neither Jack Aikins nor Daniel Diehl should be forgotten about.

I want to see Regan & Michael go under 58 seconds.

How many ARECORDNAMEs will be broken tonight?

What is this in reference to?

The graphic that appears when a swimmer breaks a record is not completed, so it has ARECORDNAME listed where “world record,” “american record,” or “us open record” should be.

I hope Uverse gets its act together. Last night they had the time block for this event at 6:30 to 8 PM. I taped Olympic Channel and when I watched the tape after the draft it picked up midway through the men’s 400 individual medley. You’ve got to be kidding. I knew that meant I missed the women’s race completely. Fortunately there was a replay at noon today so I watched from scratch, knowing it would contain the entirety.

They should get all the 50s out of the way in one night. But I was happy to be able to fast forward through 3 of them.

Impressive you still have a VCR and are taping the events.

At this point, I’m kind of hoping for a total random Top 2 finish from Isabelle Stadden… just to shake things up a little.

Vanderkaay outside of the top 3? Bold indeed

No Dolan or Piersma?!

You think Smith will get slower? I think she has a 57.9 in her and someone else will need to swim a PB to beat her.