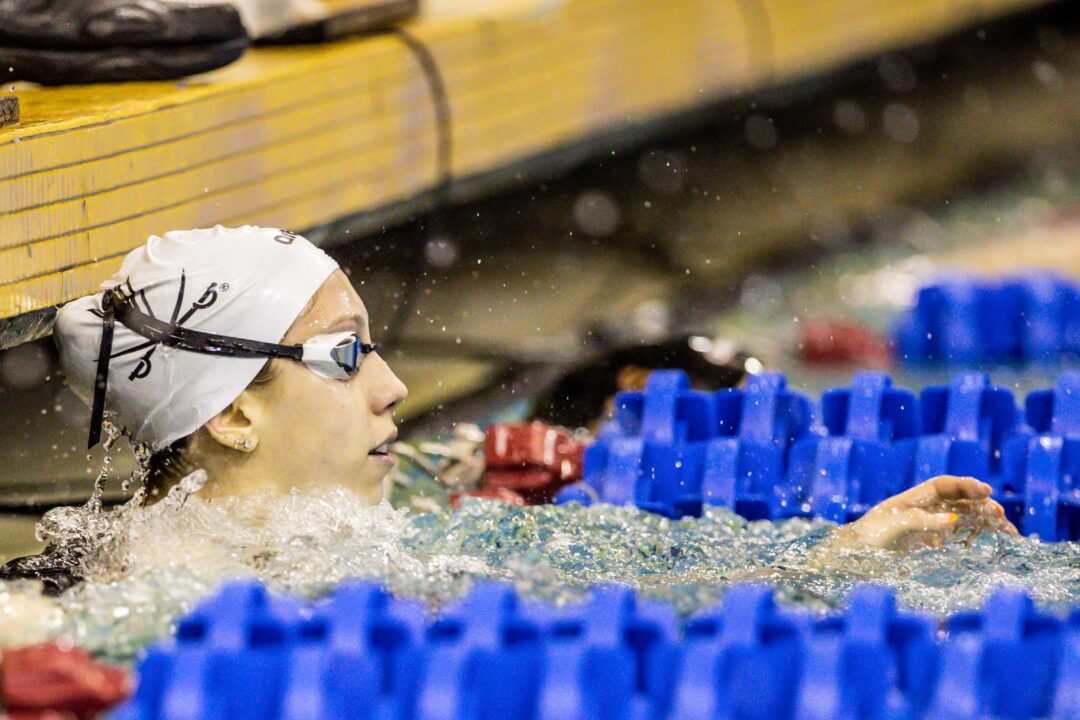 Gretchen Walsh has dropped the women's 100 back 'B' final on Friday night, while her UVA teammate Emma Weyant has done the same in the 400 free. Archive photo via Jack Spitser/Spitser Photography

With Friday’s events at the 2022 U.S. Trials generally not causing any scheduling conflicts among swimmers (it takes a rare skill set to be elite at more than one of the 400 free, 100 breast and 100 back), there are no ‘A’ final scratches on Day 4 in Greensboro.

There have been a few swimmers drop out of their respective events in the consolation finals, however, including University of Virginia teammates Emma Weyant and Gretchen Walsh.

Weyant, who has likely secured her spot at the World Championships after placing second in last night’s 400 IM, has scratched the women’s 400 free ‘B’ final after finishing 14th this morning in a time of 4:14.77.

Weyant’s withdrawal moves age group standout Kayla Han (4:15.86) up into the ‘B’ final.

Walsh was the 15th-fastest swimmer this morning in the women’s 100 back, but has dropped the ‘B’ final, as has NC State’s Kylee Alons, who was 17th but has also opted not to race in the event tonight. Both swimmers will be prepping for the 50 free on Saturday.

Walsh and Alons dropping out moves Reilly Tiltmann, another UVA swimmer, into the ‘B’ final. Tiltmann was previously pencilled in for the 18 & under ‘C’ final, and with her going up, Tess Howley will now have a second swim as well.

On the men’s side, ‘B’ final scratches came from Patrick Callan in the 400 free and Destin Lasco in the 100 back.

Callan, 13th in the prelims in 3:55.36, opts out to move Auburn’s Mason Mathias into the consolation heat.

Lasco placed ninth in the men’s 100 back prelims (54.36), just .01 back of eighth-place Sam Stewart, and drops out to make room for Aidan Stoffle into tonight’s session. Lasco will race the 200 IM on Saturday.

God forbid a college freshman doesn’t preform to ‘expectations’ on her third taper in the past few months! I imagine she is entirely focused on swimming and couldn’t possibly have any academic–let alone social–commitments too!!

For those who still doubted, Gretchen Walsh is another proof that the 100 back in the bathtub (SCY) and the adults’ pool (LCM) are 2 very different sports.

Literally in this same comment section you’re wondering why her lcm freestyle time is 2s slower than it was two years ago, which is a direct apples to apples comparison.

So maybe there’s something else!

There are several women (and men) who have had success in both, so I don’t think you can make a generalized statement like that.

Did Lia Thomas not qualify for this meet? I thought she would have been one of the headliners to make the team.

The new USA Swimming rules say she would have had to have been on HRT for 3 years, and for her that won’t be until sometime next month, so she is not eligible for this meet.

Rooting for Gretchen in the 50 free!

Walsh probably getting ready for the 50 Free. If she is 20.9 in yards, she could very well go somewhere around 24.2. I have always felt like the 50 is her best event, she has so much raw speed and such a high driven tempo. Her start isn’t the greatest nor is her back-half speed, but if she can manage to crush the underwater, she should be in contention (especially with Weitzeil off form).

Good point, and her 50 has always been a bit better than her 100

No LCM breakout from Lasco yet.

And G Walsh is lacking endurance? Her technique seems fine so idk.

Lasco had some good drops at trials last year, but not what you would have expected. And then went a 48.8 in the 100 here.

She didn’t lack endurance 3 years ago to easily win the 100 free at world juniors in 53.74. What has changed to explain she’s almost 2 seconds slower last year and this year?
And for Lasco…. 🙁 Hopefully that LCM breakout will happen in time for 2024. Hopefully….

G Walsh is prob one of the best in the fifth stroke…. dolphin kick

It’s not even that, it’s more that she just flips really fast.