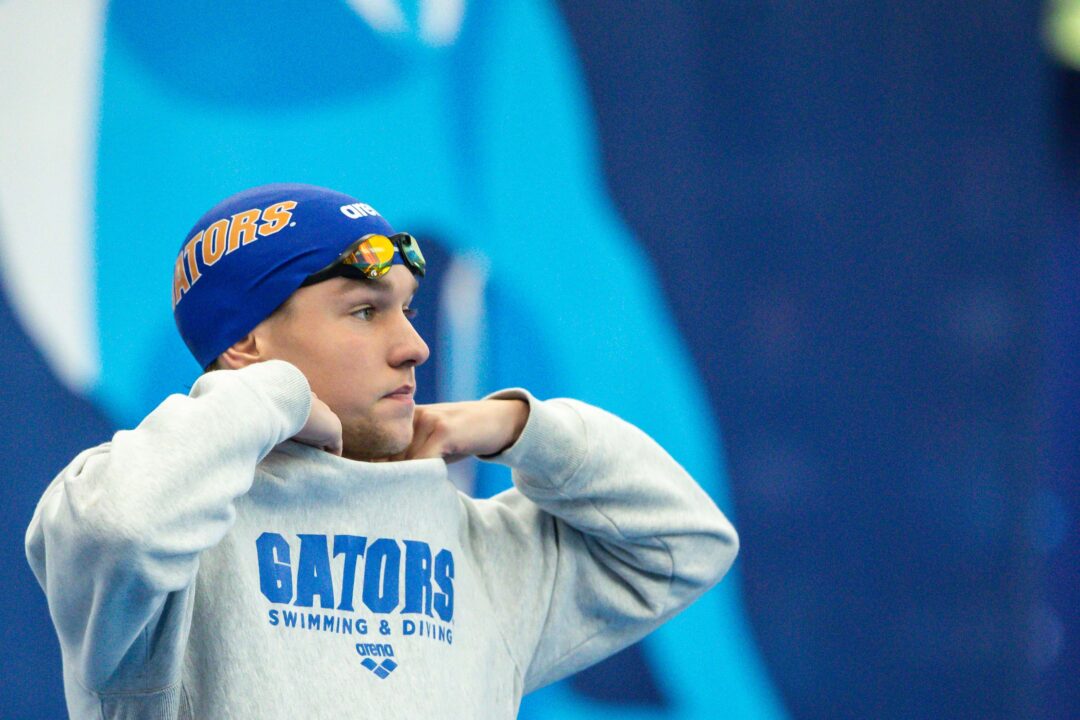 Florida's Jake Mitchell posted lifetime bests in the 200 back and 100 free to close out the final session of the 2022 U.S. Open. Current photo via Jack Spitser/Spitser Photography

We just wrapped up the final session of the U.S. Open, where Regan Smith continued to showcase her new ASU training with two wins in a brutal 200 back/200 fly double. Behind her and the other event winners though, there were several strong swims that you might have missed. Let’s take a look at some of them.

New Gators Weyant and Mitchell Win 200 Back ‘B’ Finals

We thought it was middle distance at Florida that conquered all, not backstroke. In the last session in Greensboro, Emma Weyant and Jake Mitchell both tried their hands at a relatively off event for them: the 200 backstroke. Both new Gators won their ‘B’ finals in the event, with Weyant touching in 2:14.52 and Mitchell in 2:00.75.

As Weyant has yet to make her NCAA season-debut, this is her first meet in a Gator cap. She’s put up some solid in season swims, and this was another. Weyant’s best stands at 2:13.77 from 2020 and this is only her fourth time swimming the event since. She was fourth with 50-meters to go but pulled herself into first with a 33.68 split on the final 50. Not only was that the fastest final split it in the field, it was the only one under 34 seconds.

Mitchell’s time was a new best for him, undercutting the 2:02.90 he swam in prelims. Coming into the meet, his best was 2:03.34, giving him a total of 2.59 seconds dropped on the day. Like Weyant, Mitchell wasn’t leading at the 150-meter mark, instead running third behind Tommy Janton and Landon Driggers. He powered ahead with a 29.84 final split to win by over half a second. Again, similarly to Weyant, his final split stood out–he was the only one to break 30 seconds. The only swimmer with a faster final 50 was Daniel Diehl, who split 29.59 en route to winning the event in 1:56.41.

One event later, Mitchell posted another lifetime best, swimming 50.23 to finish 13th in the 100 free.

17-year-old Jed Garner out of Rockville Montgomery Swim Club earned the win in the ‘B’ final of the 200 breast. Garner swam 2:15.60, taking two seconds off his previous lifetime best of 2:17.58. He swam that in prelims at Junior Nationals in July 2022, before adding time to finish seventh.

The Tennessee commit opened his race tonight faster than he did in Irvine, but the big difference came on his third 50. In Greensboro he split 34.73, more than a second faster than his 35.95 split from Junior Nationals. He was second with a 50 to go, then closed strong in 35.38 to win the heat by 1.55 seconds.

Michael Eastman Joins in the Fun For Louisville

Louisville had a strong night to close out the meet, with Gabi Albiero winning the women’s 100 free, along with Nic Albiero and Zach Harting going 1-2 in the 200 fly. Fifth-year Michael Eastman got in on the action as well, taking the ‘B’ final of the men’s 100 freestyle in 49.64.

Jedediah Himmy G Garner is such a W

Jacob Molacek still at it! for some reason I thought he retired.

I heard Jacob was in Texas training with
Coley…Omaha /Creighton Prep connection?
I can’t confirm it but Jacob is still swimming hard..could it be a goal of 2024 Trials ?
Great kid and if I am not mistaken, still the US Open( or is it the American ?) record holder in the 400 free relay sc yards ) along with Held, Ress and Coleman Stewart .
I think it’s great that all 4 are still training but at
different clubs .