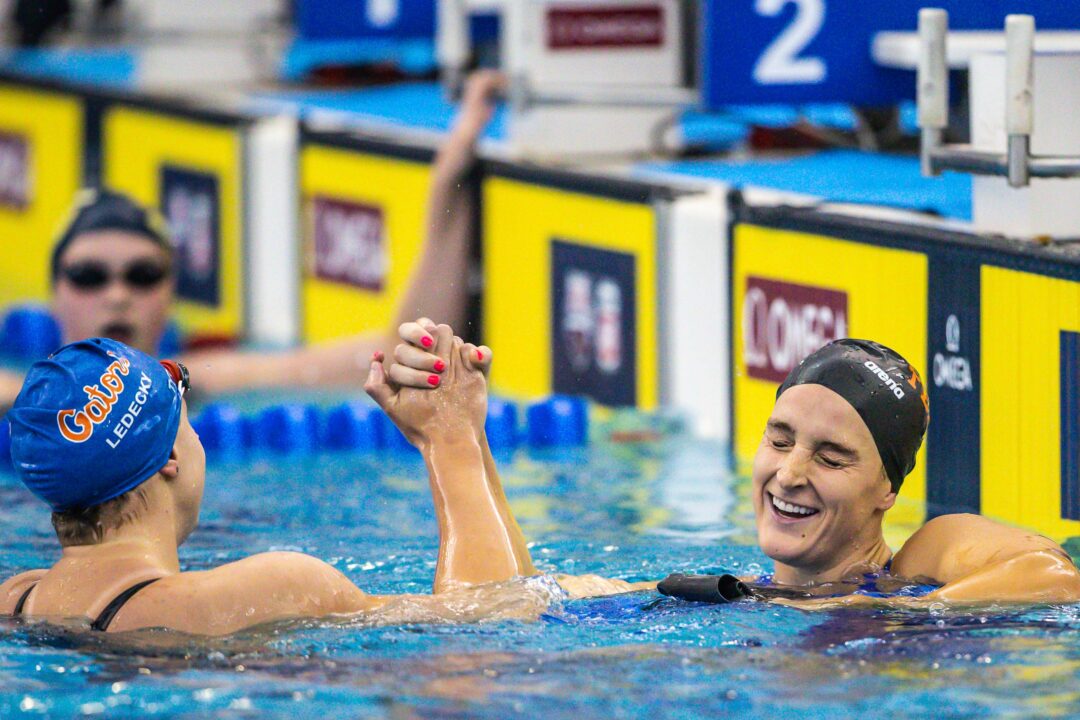 Leah Smith is the top seed in the women's 400 IM by over 4 seconds, but Katie Ledecky will surely challenge her for the national title on day 3 of U.S Nats. Archive photo via Jack Spitser/Spitser Photography

It’s the third night of finals at U.S. Summer Nationals. We’ve only got two events on tap–the 400 IM and 100 butterfly–but that doesn’t mean the night will be any less exciting. All the way down the schedule, there are some exciting races taking shape.

It looks like we’re set for a two-woman race between Leah Smith and Katie Ledecky for the women’s 400 IM national title. They both crushed their prelim heats: Smith swam 4:37.46 to get within three seconds of her lifetime best and Ledecky cruised to 4:41.84. Ledecky was slower than Smith this morning on all stroke except freestyle, where she was just .06 ahead. Ledecky closed in 1:03.34, and should be faster tonight, so watch for this race to come right down to the wire.

They’re already over four seconds clear of the rest of the field, but there should be a tight race for third. With Kathleen Golding‘s DQ overturned, there are three women sitting at 4:46: Golding, Kathryn Ackerman, and Mariah Denigan. It’s also worth keeping an eye on seventh-seeded Felicia Pasadyn, who is quietly having a great meet and has proven herself capable of closing strong.

In their prelim heat, Kevin Vargas pushed Max Litchfield the whole way, but it was Litchfield who touched first in 4:14.07, with Vargas. a tenth behind. They’re the top two qualifiers for tonight’s final, but this is a loaded field so it’s hard to call them the clear favorites. With Kieran Smith, David Johnston, Baylor Nelson and more lurking, the win could arguably come from any lane.

Notably, Smith qualified for this final from an early heat, just off his lifetime best 4:15.17, which he set at 2019 Summer Nationals. Given that Smith hardly ever swims this event, it’s hard to tell if he was on cruise control in prelims, but it’s not out of the question that he logs a new personal best in the fight for the podium.

Jake Foster is lurking down in the seventh-seed, having added five seconds from his entry time. He and Johnston finished fourth and fifth, respectively, at International Team Trials with 4:13s, so we know they’re capable of a lot more.

We were treated to a preview of tonight’s final in the second-circle heat in prelims, where Gabi Albiero and Gretchen Walsh went head-to-head. Albiero got the better of Walsh, 57.92 to 57.99 which rocketed her up the U.S all-time rankings. Both women are having breakthrough meets, and have already finished on the podium of the women’s 100 free. They’ll be looking to continue their successes here, and as the only two under 58 this morning, they’ve set themselves up as the favorites for tonight.

Looking to get in on the action and make it two Cardinals on the podium is Ai Soma, who’s seeded third in 58.35, just off her lifetime best. Don’t forget about 200 fly champion Dakota Luther either, who swam her fastest 100 fly in 3 years in 59.06. She and short-course star Beata Nelson–who’s sitting just behind in 59.07– will need to drop time tonight to be in contention for the podium.

Shaine Casas put the field on notice in prelims, closing his 100 fly in a blistering 26.56. With his 51.04, he’s the top seed by over a second. Casas swam a personal best 50.56 just two weeks ago at Austin Sectionals. He looked comfortable this morning, which could signal that we’ll see something special from him tonight.

Behind him, Gabriel Jett continues to be on fire, qualifying second in 52.17, another lifetime best for him. Jett has asserted himself at this meet as Cal’s next big star, and he’s in prime position to stand on his second podium of the meet. He’ll have to fend off Ilya Kharun, who dropped a massive personal best this morning, and NCAA champion Andrei Minakov. Jett and Kharun were the only two who made the “A” final who dropped from their seeds this morning. If the rest of the field was being conservative in prelims, we could see a much faster final.