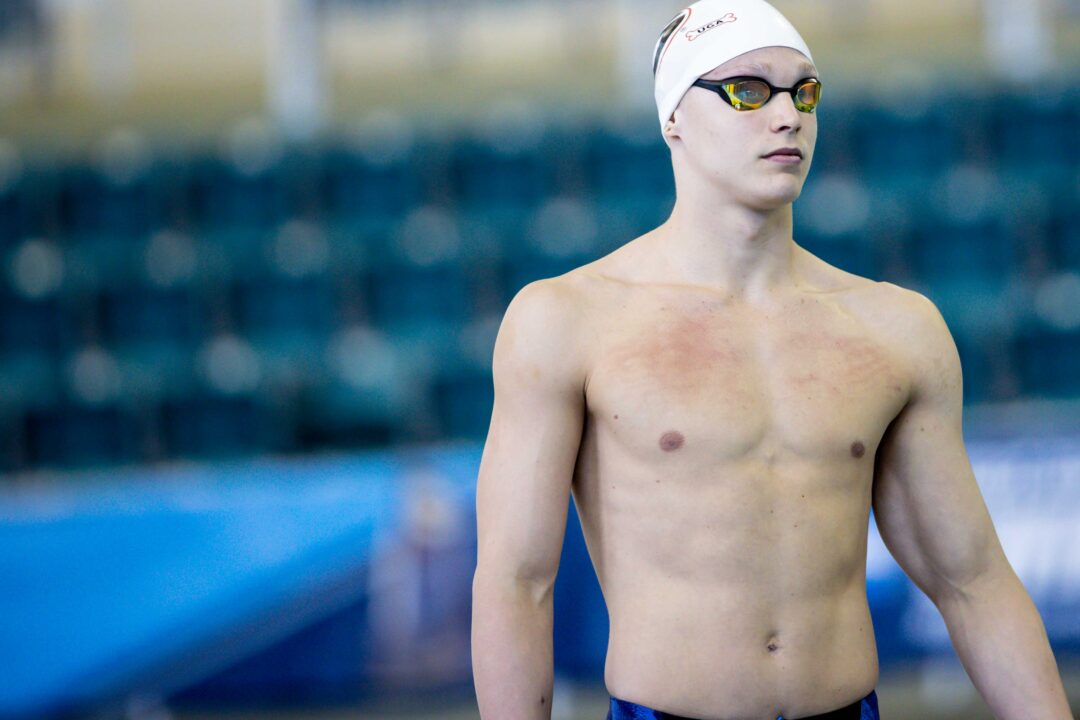 After nearly breaking the pool record in prelims, Georgia's Matt Sates comes in as the top qualifier in the 500 free with a 4:08.73. Current photo via Jack Spitser/Spitser Photography

The second night of finals at the 2022 men’s NCAA Championships gets underway this evening with the 500 free, 200 IM, 50 free, 1 meter diving and 200 free relay. The Texas men had a great morning, earning 9 total finals swims, including 6 A finals. Cal, which is projected to compete closely with Texas for the team title, has 5 swims this evening, including 4 A finals. The finals will start at 6 PM EST.

Swimming in the middle of the pool in the 500 free tonight will be a pair of Georgia Bulldog teammates, Matt Sates and Jake Magahey. Sates was the top overall qualifier with a 4:08.73 after using a masterful 4th 100 to pull away from his heat, while Magahey is the defending champion. Lurking in lane 2 is Florida senior Kieran Smith, the fastest man ever in this event with a 4:06.32, a time he has done twice in his career.

Following a blazing fast 200 IM prelim session, Cal’s Destin Lasco comes in as the top qualifier after smashing the pool record with a 1:38.71. He is trailed by Arizona State freshman Leon Marchand, who was just over a tenth back in the prelims. The A final projects to have a very tight field after Lasco and Marchand, as the remaining 6 swimmers all posted 1:40s this morning.

Cal again holds the top seed in the 50 free, with sophomore Bjoern Seeliger swimming an 18.45 this morning. Texas senior Drew Kibler and Tennessee freshman Jordan Crooks, who came into the meet as the top seed, will swim on either side of Seeliger after tying for second this morning in 18.60.

In the 200 free relay, Virginia comes in as the top seed after breaking the American record at ACCs last month. Their ACC rival, the NC State Wolfpack, come in as the second seed just a tenth behind, while Cal will swim in lane three. Be sure to keep an eye on Texas in lane 1, who come in with the 7th seed but project to move up after putting two swimmers in the A final of the 50 free.

With all eyes on what is expected to be a very close team battle between Cal and Texas, it appears that Texas has a major early advantage. Looking deeper however, paints a slightly different story. Coming into the meet, day 2 was projected to end with Texas 114.5-Cal 72, a 42.5 point gap. After prelims, the projected score at end of today’s finals is Texas 176.5-Cal 131. 45.5 point gap, just a +3 net for Texas from the psych sheet projections.

Florida senior Kieran Smith darted out to the early look in lane two, but Texas freshman Luke Hobson was close on his heels through the first 200 yards of the race. After the halfway point, however, the Georgia Bulldogs in the middle of the pool began to make their move.

Freshman Matt Sates made up ground on both Smith and Hobson in a hurry, splitting a 24.21 from the 350 to 400 and a 23.98 from the 400 to 450 yard mark. He carried his sophomore teammate with him as well, as the Georgia duo flew past the field to secure a 1-2 finish. Sates’ swim establishes a new Georgia Tech pool record and NCAA meet record with the win.

Texas moved up a bit from seeds coming into the race, with Hobson moving up to third and Johnston moving up to 6th. With Carozza’s swim in the B final, Texas had a net loss of 3 points vs post-prelim seed in the event.

Stanford sophomore Preston Forst darted out to a huge lead in the B final and held off a hard-charging Bobby Finke to win the B final in 4:11.56 to Finke’s 4:11.74. Notably for the team race, Texas’ Coby Carozza dropped from the second seed all the way to seventh, a net loss of 5 points from his seed after prelims.

Arizona State’s Leon Marchand arrived in the NCAA with a ton of hype for his freshman year, and he has officially lived up to that hype. Marchand held the lead at the halfway point and never looked back, blasting the fastest 200 IM of all time in 1:37.69- the first person ever under 1:38. Cal sophomore Destin Lasco charged hard on the second half of the race, but couldn’t make up the deficit and touched second in 1:38.21, the 4th fastest swim of all time.

Two other Golden Bears competed in the final, with senior Hugo Gonzalez finishing 5th in 1:39.82 and 5th year Trenton Julian finishing 7th in 1:40.47. Texas’ Foster duo saw Carson slide to 6th and Jake holding his seed to finish 8th. Overall, Cal held their seeds in the event, while Texas was an over -9 from their post-prelim seeds.

Stanford freshman Ron Polonsky dominated the B final, posting a 1:39.96 to win going away. That swim would have placed him third heading into the final had he swum it this morning. From a team point perspective, Texas lost points vs post-prelim seed again. Caspar Corbeau dropped from 9th to 13th while Braden Vines moved from 16th to 15th, resulting in a -4 net. Cal’s Jason Louser moved up one place to add one point from his seed.

LSU’s Brooks Curry, a junior who broke out last summer to make the United State Olympic Team, got his hand on the wall first to win the 50 free in 18.56. He touched just ahead of Cal sophmore Bjoern Seeliger, who finished second in 18.59. Tennessee’s Jordan Crooks and Virginia’s Matt Brownstead tied for third in 18.60, just .01 behind Seeliger. Brownstead’s 18.60 is a new Virginia program record.

In a shocking development, Texas fifth year Cam Auchinachie was disqualified for a false start. His teammate Drew Kibler, who was seeded 2nd after the prelims, slid to 6th in 18.87. With the DQ and Kibler’s slide, that is a net loss of 16 points from seed for Texas in the event and a 28 point net loos on the session.

Texas A&M senior Kurtis Mathews walked away with the title in the men’s 1 meter, topping Indiana senior Andrew Capobianco by 18 points. Rounding out the top three finishers was LSU senior Juan Hernandez, who finished third in 413.20.

Cal and Texas battled for second, with the Bears eventually coming out on top. Cal was led by Bjoern Seeliger‘s sizzling 18.27 leadoff leg and held off the remainder of the field to finish runner-up. Texas was led by anchor Cameron Auchinachie, who redeemed his individual DQ with an 18.14 split.

No. Ron is about 14 months older, they just came to the US to start college swimming at the same time.

No, there’s a year in between them

Am I the only one that is being driven mad by the fact that they don’t pop up the times at the finish of any of the races? It doesn’t have to be a cool color graphic… point the camera at the scoreboard!

that is usually the case in collegeswimming now on tv feeds, you need to have meet mobile to see times other than grainy scoreboard pointing

Florida clearly has been working on relay exchanges. And the work has paid off with 2 titles. #5thstroke

What a dramatic fall from grace for Grant House.

I’d be sweating if I was ASU

What are you talking about? He split 18.4 twice at this meet and went a best time in 2 IM??

Seeliger clearly cranked the hype machine up to 10 before leading off that relay. What a great swim

UVA with the only all-domestic relay