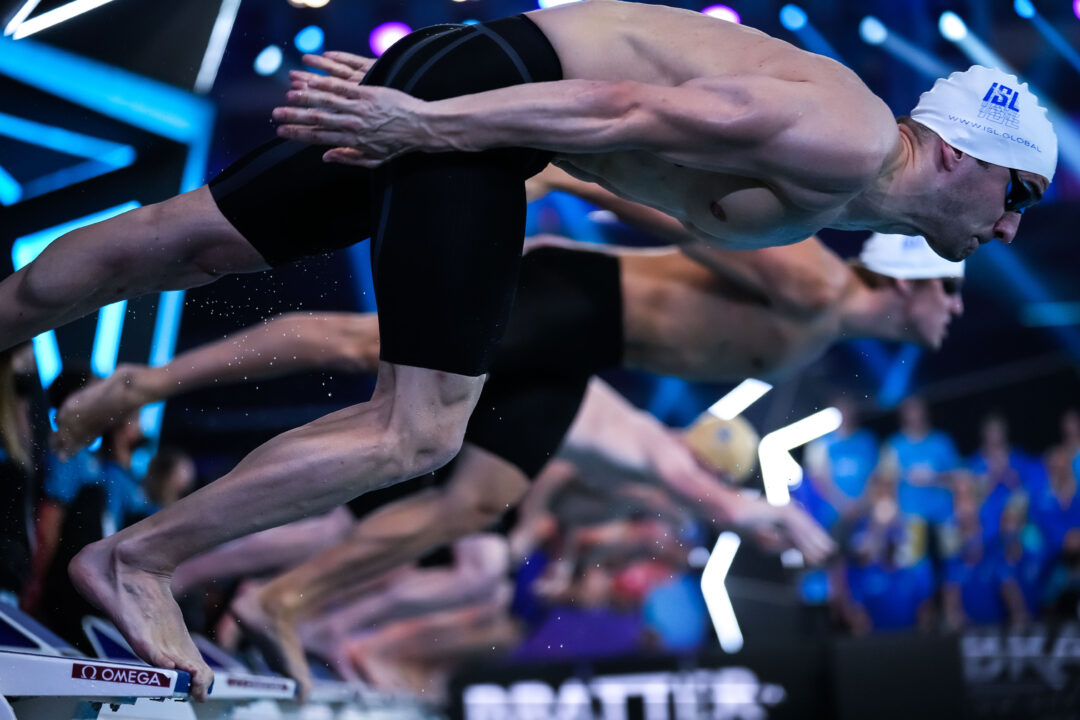 The first finals session of the 2022 Mare Nostrum Tour kicks off tonight from Monaco, with the likes of Arno Kamminga taking flight. Archive photo via Mike Lewis/Ola Vista Photography

We begin the 2022 Mare Nostrum Tour with our first finals session from Monaco, where swimmers are vying for prize money, meet titles, and confidence-boosting swims ahead of next month’s World Championships.

This particular stop on the 3-city tour is also offering up a €15,000 prize for the first world record broken at the meet, provided it’s in an ‘A’ final or in one of the final two rounds of the sprint knockouts. That gives these athletes extra incentive to put up something special with just two days of competition here in which to do so.

As mentioned, the 50’s of each stroke are being contested in a knockout format, with the men’s and women’s fields racing in cutthroat consecutive races with the field being dwindled down from 8 to 4 and finally just 2. That final head-to-head takes place during tomorrow’s session.

South Africa’s Matt Sates raced his way to the first official gold of the 2022 Mare Nostrum Tour. The 18-year-old clocked a time of 3:49.27 to represent the only swimmer of this men’s 400m free final to get under the 3:50 threshold, with his time checking in as just off his own lifetime best.

The former Georgia Bulldog owns a career-quickest of 3:49.37 from the South African Championships just last month, the same meet at which he logged FINA ‘A’ cuts in the 200m free and 200m IM.

Tonight’s silver medalist was 19-year-old Antonio Djakovic of Switzerland who touched in 3:50.65 while Estonia’s Kregor Zirk posted 3:51.71 to round out the top 3.

Zirk owns the Estonian national record with the 3:47.05 he produced at last year’s Olympic Games while Djakovic also is a national record holder for his nation. The reigning 400m free Short Course World Championships bronze medalist, Djakovic has been as fast as 3:45.82, also at the Olympic Games.

Fun fact, the Mare Nostrum record remains at the 3:41.71 Australian Ian Thorpe notched way back in 2001.

It was a 1-2 Hungarian finish in tonight’s women’s 400m IM, with veteran Zsuzsanna Jakabos leading her teammate Dalma Sebestyen.

Also landing on the podium was Rebecca Meder of South Africa, giving her nation a 2nd medal on the night with a bronze medal-worthy 4:50.93.

The Mare Nostrum record in this event remains at the 4:30.75 another Hungarian, multi-Olympic champion Katinka Hosszu put on the board in 2016.

Of note, Ireland’s Ellen Walshe, also of the University of Tennessee, wound up not swimming in this event. Also, 200m fly Olympic champion from 2016, Mireia Belmonte of Spain, placed 7th in this final with a mark of 4:50.93. Belmonte is Spain’s national record holder with a lifetime best of 4:31.21 from 2013 but has been plagued by injuries the past several years.

As expected, the Netherlands’ breaststroking ace Arno Kamminga came into the wall first to capture this men’s 200m breaststroke title.

The two-time Olympic silver medalist nearly matched his prelims effort, with his AM outing checking in at 2:10.97 while tonight he produced a time of 2:10.91 for the win. He owns the Mare Nostrum record with the 2:07.23 he logged last year in Barcelona.

Snagging silver was Adam Chillingworth of Great Britain. The Plymouth Leander swimmer came into this meet with a career-best mark of 2:12.17 in the event and nearly meet that today, clocking 2:12.52 as runner-up.

Frenchman Constantin Malachi was next in 2:17.83 to give his nation its first medal of this 2022 Mare Nostrum Tour.

United States’ Lydia Jacoby got it done for gold tonight, keeping South Africa’s Lara van Niekerk in check all the way to the wall.

Jacoby, the reigning Olympic champion in this event, earned gold in 1:06.25 while van Niekerk was less than half a second behind in 1:06.60.

Jacoby already ranks as the 10th fastest performer in the world this season with a time of 1:06.21 from the U.S. International Team Trials while van Niekerk owns a season-best of 1:05.67 from last month’s South African Nationals. That renders her the 5th fastest performer this year.

Sweden’s Sophie Hansson, who recently moved training bases from NC State to Loughborough, was our bronze medalist this evening in 1:07.46.

23-year-old Hansson took 3rd in the 100y breaststroke and 200m breaststroke at this year’s NCAA Championships one year after having won both NCAA titles last year.

We saw just one man get under the 49-second threshold in the 100m freestyle, courtesy of France’s Maxime Grousset.

This women’s 200m free was on the lackluster side, with just one contestant dipping under the 2:00 threshold.

It was reigning European Short Course champion Marrit Steenbergen of the Netherlands who wound up on top, earning a mark of 1:58.93 to take the gold.

Behind her were Lucile Tessariol of France and Leonie Kullmann of Germany who placed 2nd and 3rd with times of 2:00.13 and 2:01.11, respectively.

Now 22 years of age, Steenbergen originally busted onto the international swimming scene with a haul of 6 medals at the 2015 European Games. She took a small break from the sport to finish up her studies before racing her way back onto the Dutch national team and en route to potentially qualifying for Paris 2024.

The Swiss got another medal in their column with this 200m fly victory at the hands of Noe Ponti.

The 20-year-old Olympic bronze medalist powered his way past Olympic champion Chad Le Clos to clinch the gold in 1:56.51, just .23 ahead of the South African.

Brazilian Leonardo De Deus was right in the mix, claiming bronze in a solid 1:57.14.

For Ponti, the former NC State commit was just over a second off of the 1:55.49 he logged at this past March’s Swiss Championships, while Le Clos has also been under 1:56 with a season-best of 1:55.75 from last month.

As with the women’s 200m free, this 100m fly final was on the subdued side, with no one getting under 59 seconds in the field.

Dutch swimmer Tessa Giele hit a mark of 59.12 to reap gold, while Farida Osman of Egypt took silver in 59.36 and Lilou Ressencourt of France captured bronze in 59.39.

For Giele, tonight’s result still represents the 19-year-old’s 3rd fastest time ever, sitting only behind her PB of 58.87 and next time of 58.99, both from this year as well.

It was a tight race in this men’s 100m back final, with France’s Yohann Ndoye-Brouard holding off a charging American in Michael Andrew,

Ndoye-Brouard stopped the clock in 53.62 for the win, just off his season-best of 53.44 from last December. For Andrew, the multi-Olympic finalist checked in with 53.97 for a new season-best.

South Africa’s 18-year-old Pieter Coetze made his presence known with the Olympian garnering bronze in 54.00. That beat the 54.08 the multi-talented teen logged at the South African Championships last month.

France topped the podium once again, with Pauline Mahieu clearing the field in this women’s 200m backstroke for the victory.

She produced a time of 2:12.02 to lead New Zealand’s Emma Godwin as the only two swimmers to notch efforts under 2:13.

Rounding out the top 3 was Estonian national record holder Aleksa Gold who put up a 2:13.79 for bronze.

Chalk up another win for South African 18-year-old Matt Sates, with the former Georgia Bulldog handily beating the 200m IM field tonight with a mark fo 1:57.43.

At last month’s South African Championships, Sates hit a time of 1:58.37, so this evening’s effort hacked nearly a second off of that result to establish a new PB for the man. He still now ranks as his nation’s 2nd best performer of all time, sitting only behind retired Darian Townsend’s national record of 1:57.03 from 2009.

USA’s Sam Stewart also came on strong with a 1:58.31 while Algeria’s national record holder Jaouad Syoud put up 1:59.02 as the bronze medalsit.

Adam Chillingworth is representing Hong Kong instead of Great Britain

It’s worth to mention Sarah Sjostrom’s 24.06 in 50 free’s quarterfinals, fastest time of the year.

glad to see the power couple on top

What was the section for USA’s team here,

Sates backstroke is holding back his IM so much. Killer in the other 3 strokes, but 31 is a terrible split

That was his 12th swim of the day and most without any warm down.