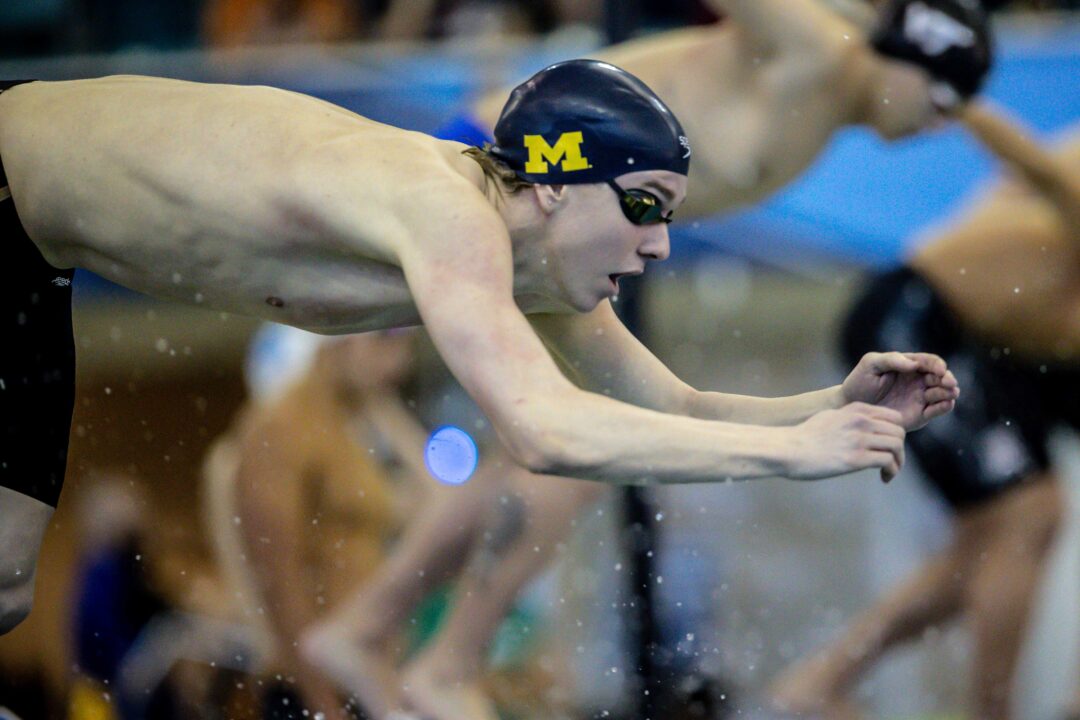 The mile, which is contested as a timed final event with all swimmers except the top 8 seeds competing in the mid-afternoon, did have one notable scratch: Michigan’s Jake Mitchell. His scratch moves Stanford’s Grant Shoults into the second-to-last heat.

Mitchell, who famously made the American Olympic team in the 400 free last summer in a time trial, came into the meet as the 15th seed in 14:44.22. Mitchell previously competed in the 500 this week, though he was well off of his seed time, adding nearly 9 seconds to finish 46th.

It has been aa rough week overall for the Wolverines, who currently sit in 20th place with 34 points. Israeli freshman Gal Cohen Groumi is their top scorer with 13 points and senior Jared Daigle has contributed three. Those two are the only Wolverines to score individually entering the final day of competition.

The conjecture in here from the commenters is precisely what I expect to find in the “Overreacting” articles for the meet, only to find a discussion on “Wow, the fast swimmers go fast.”

Waiting for Jake Mitchell to hit the transfer portal Monday….

His 4IM looked a bit off yesterday

Seems obvious he’s swimming through the meet. His 400m in Chicago two weeks ago was a strong indicator that NCAAs were not a priority. There were no NCAA kids there but Callan/Mitchell. World Trials are in four weeks. We’ll know what’s up then.

Wonder what the athletic director, alumni, and teammates think of this decision

It looks to me like Kieran Smith gets it.

He made the Olympic team this summer with those coaches. Y’all need to chill

He made the Olympic team with his club team coaches, not the Michigan ones

Weird things going on at Michigan this year.

Thought he was training at Carmel for the run up?

Reports on deck are that he either has or had mono.

Jeez. Callan scratching the 100 too? What’s going on with the wolverines?