2022 European Championship Previews: Can Martinenghi Keep His Momentum in Rome? 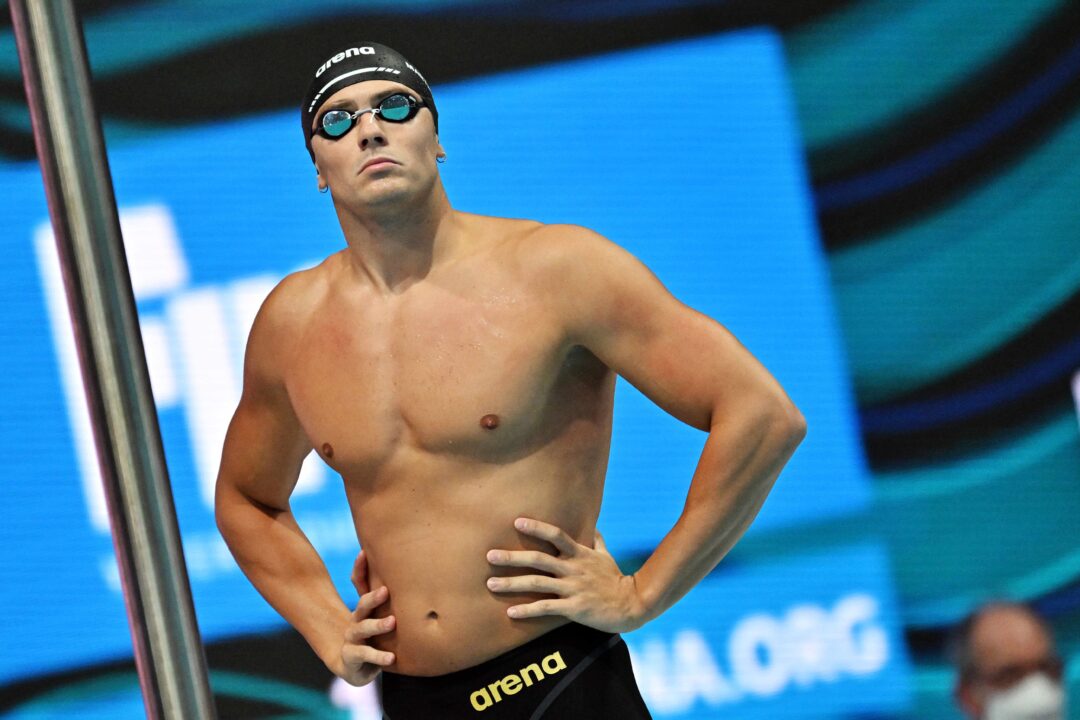 Olympic 100 breast bronze medalist Nicolo Martinenghi kept rolling in Budapest, winning gold in there and silver in the 50. Can he keep it rolling in Rome? Archive photo via La Presse Gian Mattia d’Alberto

After dominating the last four editions of the European Championships, Adam Peaty is skipping this year’s meet. With Anton Chupkov also out of the meet due to the Russian ban, we’ll see new champions in all three male breaststroke events in 2022.

Italian Nicolo Martinenghi is coming off an excellent 2022 World Championships to pencil himself in as the 50 and 100 breaststroke. That said, there are several swimmers—like Arno Kamminga and James Wilby—who have regularly been silver medalists behind Peaty and will be eager to make the most of this opportunity.

The top six men in this event are seeded with times under 27 seconds, promising a close race in the final. Of those six, three are Italian, which means that the host nation has a good chance to put two swimmers on the podium. Nicolo Martinenghi leads the way, having won silver at Worlds in 26.48. He’s entered more than three-tenths ahead of the second-seeded Jan Kozakiewicz, which makes him the man to beat here in the sprint.

If anyone’s going to do it, it might be his teammate, Simone Cerasuolo. He came within .01 of Martinenghi’s world junior record in this event in 26.85, and he currently owns the SCM version. He’s 19 now, so while he’s no longer able to break the long course record, he’s still been improving over the course of this season, and has an excellent shot at a medal here.

At the Italian Championships, Cerasuolo beat out long-time sprint breaststroke veteran Fabio Scozzoli to qualify for Worlds. Scozzoli instead went to the Mediterranean Games, where he posted the 26.97 he comes to Rome with. Only two Italians will be able to progress out of the prelims, so assuming Martinenghi is firing, Cersauolo and Scozzoli will be battling it out for the second spot.

Bernhard Reitshammer reset the Austrian record with each of his swims at Worlds, eventually lowering it to 26.94 as he finished fourth. As Kozakiewicz’s entered with his fourth-place time from 2021, it’s likely Reitshammer and Lucas Matzerath who will be the ones disrupting the Italian sweep. Matzerath clocked 26.99 in Budapest, just getting under 27 seconds for the first time.

Slovenian Peter John Stevens set his lifetime best of 27.06 back at the 2018 meet, winning bronze, but was neared that in April (27.32) and should be a factor in the final.

With Peaty out of Worlds, it looked like it was Arno Kamminga‘s time to shine in the men’s 100 breaststroke. However, that’s not how things transpired, as it was Nicolo Martinenghi who won gold, clocking 58.26 for a new Italian record.

Now, Martinenghi will look to back up that swim in front of a home crowd. The 23-year-old has the edge coming into Euros, with Kamminga’s form a question mark as he eventually withdrew from Worlds (after taking silver in the 100 breast) due to illness.

The 100 breaststroke falls on the first day of the meet, meaning there will be no time for Kamminga to ease into the meet, he’ll have to hit the ground running. That shouldn’t be much of an issue, however, as Kamminga did race in Switzerland in mid-July and put up very solid untapered times of 59.76 in the 100 breast and 2:10.04 in the 200 breast.

Martinenghi and Kamminga look like the favorites for the top two steps of the podium, but James Wilby could make things interesting. Wilby won the 100 breast at the Commonwealth Games, shocking everyone by beating Peaty. He was slower than he was in Budapest, but that win is sure to be a huge confidence boost for the 28-year-old. Wilby won silver in 2018 at this meet and bronze in 2021, and while Martinenghi and Kamminga are tough competition, his Birmingham win might have given him the boost he needs to upgrade to gold.

Lucas Matzerath and Andrius Sidlauskas are the other two Worlds finalists descending on Rome. With Martinenghi, Kamminga, and Wilby clogging the top of the psych sheet, they likely have only an outside chance at a medal but are still capable of making things interesting in the final. Matzerath was 59.50 in Budapest, just two-tenths off his lifetime best from the Tokyo Olympics.

Two other swimmers to keep an eye on are Reitshammer and Cerasuolo. Reitshammer hit a lifetime best in the Worlds semis at 1:00.03–look for him to try to crack the minute mark for the first time here. Cerasuolo is the SCM world junior record holder in the 50 and 100 breast. He didn’t swim this event at Worlds, and is seeded with the 1:00.08 he dropped in Ostia in July. Like Reitshammer, he’ll be aiming at breaking 1:00 for the first time.

Kamminga withdrew from Worlds before the semis of the men’s 200 breaststroke, so we haven’t seen him race this event fully tapered this year. He was 2:08.22 in April 2022, which would have been good for a silver medal in Budapest. The 200 breast comes after the 100 breast, so we should already have gotten a look at Kamminga’s form post-illness. If he’s looking good, which, based on his 2:10-flat in mid-July, he should be, he’s the favorite for gold.

If Kamminga isn’t on form, it will likely be a three-way race between Matti Mattsson, Anton McKee, and Wilby for gold.

Mattsson is the Tokyo bronze medalist, which he won in 2:07.13. He hasn’t been at that level yet this season; he finished eighth at Worlds, posting his best swim in the semis at 2:09.04. He’ll be eager to get back in the meal hunt, and he looks like one of the likely contenders here in Rome, even if he isn’t right on his best.

Wilby is coming off winning silver at the Commonwealth Games in 2:08.59. That was faster than he went at Worlds, and if he can continue that trend and get closer to his lifetime best of 2:07.49, he push Kamminga, Mattsson, and McKee for a medal. As for McKee, he swam 2:08.74, an Icelandic record, in the Worlds semis which put him in prime position for a medal. However, he ultimately finished sixth. If he wins a medal, it will be his first at a major long course international championship.

Other names to keep an eye on will be France’s Antoine Viquerat, Lithuania’s Sidlauskas, and Bulgaria’s Lyubomir Epitropov. The three of them are all seeded with the 2:09s that they swam in last year. None were close to those times at Worlds; the 23-year-old Epitropov was the fastest of the three in 2:11.01 and finishing 14th. All of them will need to be faster than they were in Budapest if they want to upset the favorites, but lanes in final should be within their reach.

I know it’s his least favourite distance and he didn’t do it at Worlds, but is anyone else surprised Kamminga is not competing in the 50m? Sure Martinenghi is heavy favourite for gold, but with no Peaty or Shymanovich and only one of Scozoli or Cerasuolo qualifying from the heats, seems like an easy medal to give up for him?