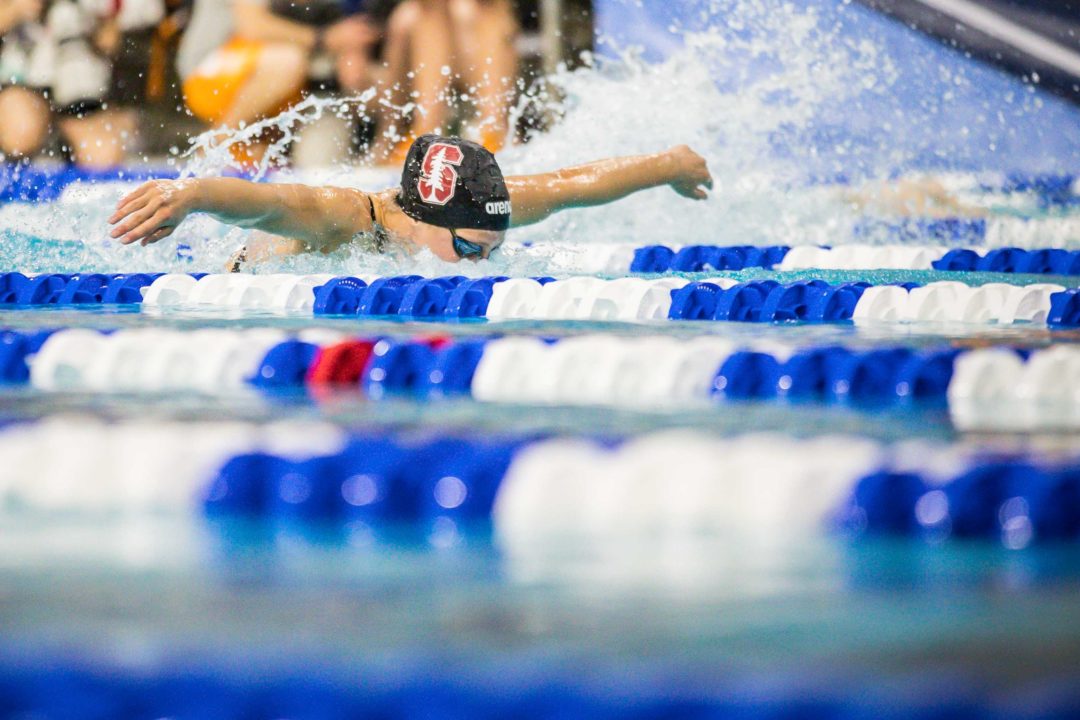 Returning from the 2019 NCAA A-final in this event is just one woman: Stanford senior Brooke Forde.

Forde has taken over as the top 400 IMer in the NCAA the last two seasons, though she hasn’t been able to prove it at an NCAAs in two years. She was third in 2019, behind record-holder and teammate Ella Eastin and Texas A&M’s Sydney Pickrem. As a freshman in 2018, she had to deal with those two and Katie Ledecky, and she took fourth.

With a lifetime best of 3:59.26 from 2019 NCAAs, Forde is well ahead of any other competitor in this field, with Nelson’s 4:02.62 from 2021 ACCs making the Cavalier sophomore the second-best swimmer in the NCAA since the beginning of 2019. It would be a long-awaited title for Forde, who has been very fast, but unlucky in terms of who she’s had to race at NCAAs as an underclassman.

For Nelson, her ACC title came with a near-two-second drop, coming down from a 4:04.36 from the 2020 ACC Championships. Nelson’s over a second faster than anyone else in the field behind her, and she seems to have the best shot to challenge Forde as well as the four-minute barrier. To win, though, Nelson will have to swim fearlessly; Forde split a 54.5 on the free leg at 2019 NCAAs, the best closer in the field, so Nelson has to open up a lead after breast and hold on.

While the race for top placements behind Forde and Nelson might be tight, the slew of four-oh-lows this season really put into perspective just how fast Ella Eastin’s NCAA/American/U.S. Open record swim was in 2018, when she went a 3:54.60.

Kentucky has a ton of talent in this event, with five women seeded in the top 30. The biggest threats are sophomores Lauren Poole and Gillian Davey, who are both having phenomenal seasons. At SECs, where the Wildcats won their first conference title ever, Poole especially made significant gains. She went 4:06.84 in the 400 IM prelims, which was her first time under 4:10. She attacked her finals swim like a pro, dropping nearly three more seconds to win the SEC title and post a new best and UK record of 4:03.90. Davey snagged the silver in the event, going a lifetime best 4:05.96. Meanwhile, senior Bailey Bonnett was 4:07.63 at SECs, though her lifetime best is a 4:05.62 from 2020 SECs.

The top-ranked freshman this year is Michigan’s Kathryn Ackerman. She looked a bit off at Big Tens, perhaps due to Michigan’s training pause due to COVID-19 restriction, but her 4:08.37 from the conference meet still has her at #16 on the psychs. Ackerman actually went a 4:05.58 at a Michigan intrasquad in November, which was two seconds quicker than Courtney Beidler’s program record. On the one hand, Ackerman’s early-season swim suggests she could push for a top-three finish– on the other, she hasn’t quite followed through with another swim of that caliber, and she could miss scoring altogether.

Will the picks for the 450 IM be revealed soon? I know who I’m picking for that one.

Fifth seed Evie Pfieffer not getting any swim swam love for a top 8. Understand their skepticism, but betting this is year Texas toughness shines, especially within one.