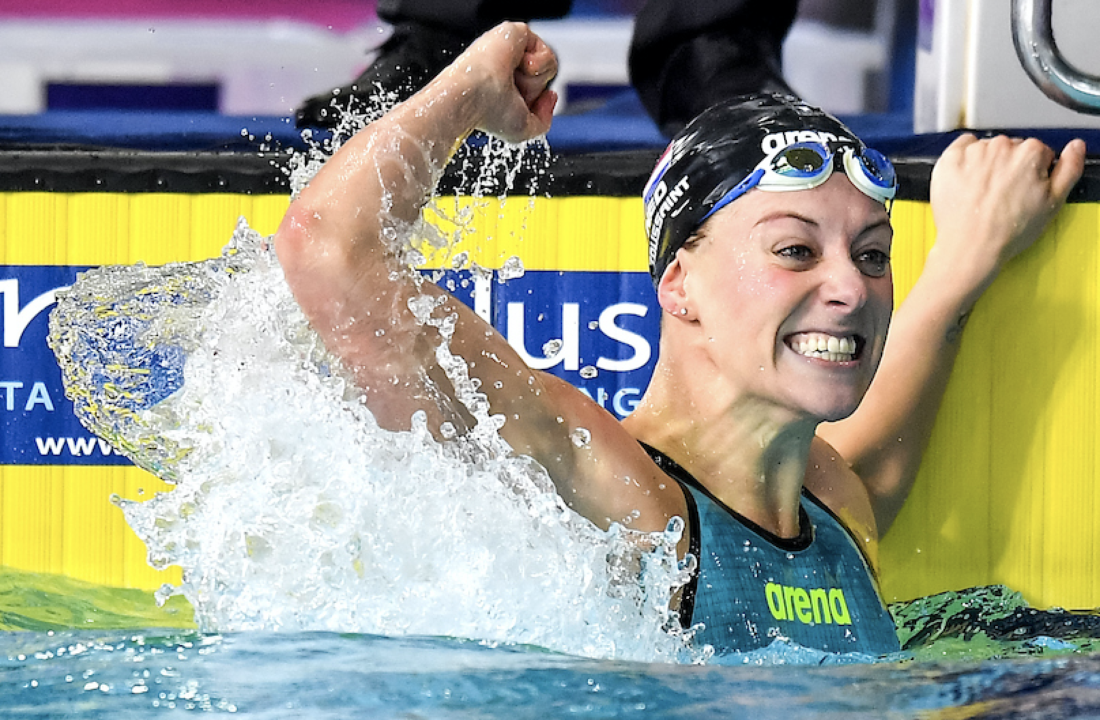 With numerous women in the mix for all 3 backstroke events, it's looking like a 3-round battle is brewing between short-course stars Toussaint and Masse. Archive photo via Andrea Staccioli / Deepbluemedia / Insidefoto

The women’s 50 backstroke is going to be an interesting race to watch in Abu Dhabi considering the recent influx in new names to the top of the rankings who will join the many staples of the event. Several women have taken the event by storm lately including notorious butterfliers Maggie MacNeil and Louise Hansson and France’s Analia Pigrée.

Maggie MacNeil recently got a chance to display her short course meters prowess when she raced at the FINA World Cup in Germany earlier this fall where she swam a 25.84 in the event. That swim marked a new Canadian record and puts her at #2 in the world this year behind world record holder Kira Toussaint.

Toussaint is not a new name to the field but did have a breakthrough short course season back in 2020 when she delivered a new world record in the event not once, but twice. Toussaint posted a 25.60 world record in November 2020 and matched it a month later. She was back in form during the 2021 ISL season, hitting a 25.79, 25.81, and 25.84 to constitute the top 3 times globally this year.

The third-fastest woman thus far in 2021 who will be racing in Abu Dhabi is multi0-Olympic medalist Kylie Masse. Masse is the only entrant other than MacNeil and Toussaint to have dipped under 26 in the event so far, having hit a 25.96 and 25.97 this fall. The Toronto Titan seems to rarely miss the podium and will be a solid contender for the win.

Louise Hansson is known as one of Sweden’s leading butterflier along with teammate Sjostrom, but recently she threw down a 26.07 to set a new national record in the 50 back. She got close to that time the next month with a 26.12 and will be one to watch here. As will French up-and-comer Analia Pigree who recently set a long course national record of 27.39 this summer and swam a 26.05 short course in the fall.

American Olympian Rhyan White may be looking to upset the field as well, however. White is still an NCAA athlete meaning that she hasn’t swum short course meters often. We know that her short course speed is at her disposal, though, considering her recent short course yards swims in Tennessee. White won the 100 backstroke at the Tennessee Invite with a 50.31 100 backstroke (just 0.10 slower than her silver medal time at 2021 NCAAs) and delivered a field-best 200 medley relay leadoff 23.85 50 back.

2018 Short Course Worlds silver and bronze medalist Caroline Pilhatsch and Holly Barratt are also returning this year, although they haven’t been as fast as the rest in recent months. Additional names to remember here are Silvia Scalia of Italy, Maike de Waard of the Netherlands, Daria Ustinova of Russia, and Nina Kost of Switzerland.

It’s not surprising that the front runners in the 100 backstroke will be many of the same faces we saw in the 50. Kira Toussaint is the top-ranked swimmer in this event as well, holding a 55.42 from the Kazan stop of the FINA World Cup. In fact, Toussaint holds the 1st, 2nd, 5th, 7th, and 10th fastest swims this year. Considering #3, #4, #6, and #9 belong to Ingrid Wilm who didn’t qualify to swim for Canada.

That makes Toussaint the heavy favorite here based solely on rankings as Kylie Masse occupies the 8th place position with her 55.77 from a few weeks ago. As mentioned above, Kylie Masse is consistently able to get to the wall when she needs to and her ISL season indicates that Abu Dhabi should be no exception to the rule.

While Canada had two frontrunners in the 50, it’s the Netherlands with two women in the top 3 in the short course meters rankings here. Maike de Waard is closely trailing her compatriot Toussaint with a 55.86 from the Short Course European Championships. Toussaint and de Waard went 1-2 there just a few weeks ago. Could they do it again?

Speaking of Short Course Euros, Analia Pigrée was in the mix as well. Pigrée was around half a second behind the leading duo and posted a 56.40 to claim bronze. It will also definitely take a sub-56 swim to make the podium in Abu Dhabi but considering her improvements this year, don’t count her out yet.

Short course meters performance can only get us so far for these rankings because Americans Rhyan White and Katharine Berkoff‘s short course yards prowess is just as relevant. Berkoff and White actually went 1-2 in the 100 backstroke for NC State and Alabama at last year’s NCAA Championships. While White has since become an Olympian, neither of them has shown any signs of slowing down this season.

As previously mentioned, White threw down a 50.31 at the recent Tennessee Invite (along with a 50.15 100 backstroke relay leadoff) and Berkoff swam a 50.45 season-best in late November. That puts them right around where they were to top the NCAA podium and gets them in contention for a podium finish.

Joining the conversation from the NCAA is Maggie MacNeil who has been a 50.33 already this season at the Minnesota Invite a few weeks ago.

Also included on the elite slate of entries for this event will be the Italian duo of Margherita Panziera and Silvia Scalia, Olympic finalist in the event Anastasia Gorbenko, and Australia’s Holly Barratt.

The Tokyo Olympic final for the women’s 200 backstroke featured 2 women from Australia, China, Canada, and the USA. Of those 8 competitors, 4 will be racing in Abu Dhabi. Kylie Masse is the sole medalist from Tokyo who will be in contention for the short course title as Australians Kaylee McKeown and Emily Seebohm are not taking part (nor is Masse’s compatriot Taylor Ruck who was 6th at the Games).

While Masse may be the top-ranked Olympian in the field, 50 and 100 leader Kira Toussaint is reaping the benefits of an incredible fall and will be the top seed in this event as well. Toussaint’s quickest swim over the past few months has been the 2:01.26 she used to win gold at Short Course Euros, though she’s been solid in the ISL as well.

Masse is not far behind Toussaint in this event either and holds a season-best of 2:01.45. While Masse rose to prominence in the 100 backstroke originally, her 200 has developed well over the past few years, and considering Toussaint’s striking sprint speed thus far in 2021, it seems as though the 200 marks Masse’s best shot at gold in Abu Dhabi.

The other side of the American 200 backstroker duo in Abu Dhabi will be Isabelle Stadden, another NCAA star. Cal swimmer Stadden recently raced the 200 backstroke at the Minnesota Invite, winning with a 1:50.02. Like White, that was within inches of her swim from NCAAs in 2021 where she took bronze in a 1:49.66.

Peng Xuwei and Liu Yaxin couldn’t quite dip under 2:08 at the Olympic Games this summer and wound up taking 7th and 8th overall. They continued backstroking into the fall and both nearly hit their Tokyo times at the 2021 Chinese National Games in September when they went a Xuwei took gold in a 2:08.54 and Yaxin silver with a 2:09.33. We don’t have much data on their short course speed of late but they will certainly both be in the mix.

Shifting back to short course meters, Anastasia Shrukdai has been making waves this ISL season in the 200 backstroke and is actually the 3rd fastest woman in the field. She threw down a 2:01.77 earlier in the season and then got down to a 2:01.51 to place second in the final.

MacNeil win either win gold or silver in the 50 Back.
She will win the 100 Fly, challenge for a minor medal in the 100 back (3rd-5th range), and I don’t really know about her 50 Fly – she’ll medal there but no idea on the color.

Katharine Berkoff will get a medal here. Her SC 100 back is just too good. Also, I don’t think White will place that high. She’s better LC swimmer.

White has been 50.0, Berkoff 49.7 yards. They are 58.4 and 58.6 LCM respectively. Don’t know if I agree that White is a better LCM swimmer. It’s kind of a wash. Both are flying under the radar internationally because they haven’t swum SCM ever. I expect both to throw down 55’s. For comparison, if you recall, Toussaint was only 50.8 in college and Masse hasn’t put up the kind of SCM times that are equivalent to her LCM best. I’d say this will be a fun race to watch. And don’t forget McNeil who’s been 49.7 yards and 59 LCM.

Maiike de Ward was very fast at the end of ISL, expecting a silver/bronze for her.

She also got a medal at Europeans I thought… (or it was in the 50 fly, and some relays)