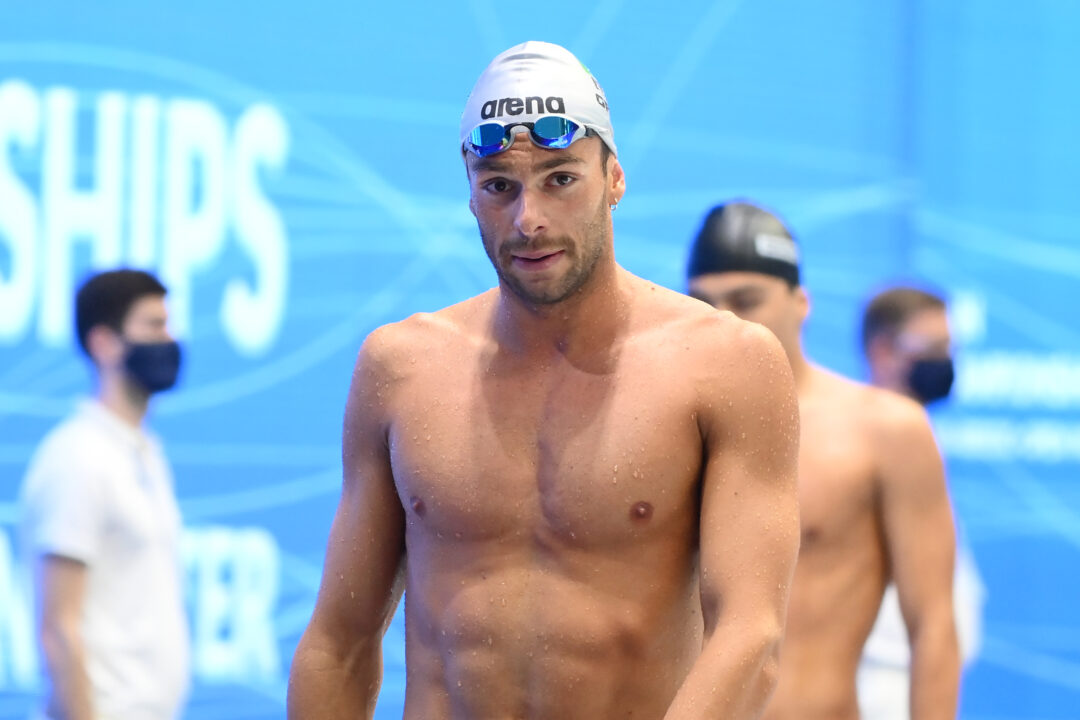 Who will rise to the occasion and move towards gold in women’s 100 freestyle to make the most of defending champion and world record-holder Sarah Sjostrom‘s absence? Can Katinka Hosszu bounce back from her silver medal performance in the 200 fly to take gold in the 200 IM? After a tight battle in the 1500 freestyle, will defending champ and this year 1500 free victor Mykhaylo Romanchuk prevail, or will Gregorio Paltrinieri take the win?

While we will need to wait for answers on the 100 free and 200 IM until the finals of the events later on this week, the morning swims will certainly be an indicator of where everybody stands. Follow along with our live recap as racing gets underway in Budapest.

Olympic champion in the 50 freestyle Ranomi Kromowidjojo got things going here in heat 5 with a 54.05. That swim for Kromo leads the way so far but is still a bit over her current PB in the event which she set back in 2012 at a 52.75. Marie Wattel for France followed in the heat with a 54.07 which will also certainly be enough to advance to the semis. Signe Bro and Kasia Wasick tied for 3rd in the heat, each with a 54.31. That’s just a touch away from the Polish record of 54.22 for Wasick.

Kromowidjojo’s fellow Dutch sprinter Femke Heemskerk answered back by bringing the field under 54 for the first time with a 53.84. That’s a very solid swim for Heemskerk for this prelim and will give her some good momentum towards taking the crown later in the meet in defending champion Sjostrom’s absence.

Heemskerk will however need to fend off the only other sub-54 so far Anna Hopkin of Great Britain who was a 53.94 in the last heat. That’s within a second of Hopkin’s PB in the event of 53.21 from the 2019 World Championships.

Also getting their names towards the top of the start lists for semis was Andi Murez in a 54.19 to tie the Israeli record, Great Britain’s Freya Anderson with a 54.25, and 2021 200 freestyle champion Barbora Seemanova of the Czech Republic with a 54.26.

It was a national record-threatening prelims round during the men’s 50 breaststroke as all 4 of the 5 top finishers got close to their respective national records and 1 of those top 5 successfully beating the NR in the form of Jan Kozakiewicz.

Nicolo’ Martinenghi, Ilya Shymanovich, and Jan Kozakiewicz all threw down solid 26s during the 50 breaststroke heats. Martinenghi was a 26.54 during heat 5 which gets him within a touch of his own Italian record from earlier this year of 26.39. Also nearly setting a national record, Shymanovich was a 26.72, compared to his 26.46 NR from the 2021 Belarussian National Champs.

Kozakiewicz, however, did manage to become Poland’s fastest-ever man once again by getting under his own national record of 27.11. His 26.82 makes him the first Polish man to ever crack 27 in the event.

While those 3 men put up solid swims, no one could beat world record-holder Adam Peaty in the event. Swimming in the last heat, Peaty posted a 26.34 to take top seed, getting within a half of a second of his PB and world record from 2017 which sits at a 25.95. Racing next to Peaty, Russia’s Kirill Prigoda also dipped under the 27-second barrier with a 26.93, just over his national record of 26.72.

Cyrielle Duhamel put up a decent best time in the 200 IM with a 2:12.35, improving upon her 2018 swim of 2:12.68. That swim allowed her to get the heat win for France, ahead of Italy’s Ilaria Cusinato. Cusinato’s swim was a little bit further away from her fastest-ever swim which is currently a 2:10.25 Italian record from this meet in 2018.

Germany’s Kathrin Demler managed a 2:13.38 to come in behind Duhamel and Cusinato for third place in heat 3.

Next up, Abbie Wood delivered a 2:11.07 to take over Duhamel’s leading position. Wood recently swam a 2:09.23 in the event at 2021 British Swimming Trials which was good enough to earn herself a spot on her country’s Olympic roster in the event.

Italy’s Sara Franceschi, Spain’s Africa Zamorano Sanz, and Turkey’s Viktoria Gunes all swam well alongside Wood, hitting 2:11.78, 2:12.85, and 2:12.93, letting them advance to the semis. Notably, this was Gunes’ return to the pool after having swum the 100 breaststroke and subsequently scratching the 200 breast on day 3.

Robert Glinta wasted no time during the 2nd of 5 heats of the 200 backstroke, posting a 1:59.74 which was nearly enough to qualify for the semis but was ultimately just short of the 1:59.23 it took to advance. The swim also gets him closer to the 200 backstroke Romanian record of 1:56.45 from Răzvan Florea in 2008. Glinta already holds the 50 and 100 national records.

Next up, the French duo of Antoine Herlem and Yohann Ndoye Brouard both swam in the second heat, hitting a 1:56.42 and 1:57.70, respectively. That got Herlem within striking distance of Ndoye Brouard’s 1:56.10 French national record. Swimming in the same heat as the two French men, Grigory Tarasevich of Russia was a 1:57.41 for second place in the heat while Poland’s Radoslaw Kawecki swam a 1:57.79 for fourth.

1:53.23 European record-holder Evgeny Rylov won the last heat but couldn’t quite beat Greenbank’s swim, hitting a 1:55.74. Rylov will move onto the semi-finals and will be looking to defend his 2018 title in the event which he snagged in a 1:53.36. Polish swimmer Jakub Skierka and Italy’s Lorenzo Mora rounded out the final heat with their swims of 1:58.15 and 1:58.48, respectively.

Next up, Israel’s squad established a brand new national record of 8:00.51, improving upon the country’s previous fastest-ever mark of 8:06.91. That former record was set earlier this year at the 2021 Swim Open in Stockholm by the same 4 women who raced today:

Denmark’s team in the prelims were able to post the third-fastest time in the field and were right behind Israel with an 8:01.65. That swim came from Marina Heller Hansen, Helena Rosendahl Bach, Amalie Soeby Mortensen, and Maj Howardsen. Those 4 women got close to the 7:55.56 national record from 2009.

In the next heat, Ukraine’s Mykhaylo Romanchuk and Henrik Christiansen had a solid race against each other with Romanchuk ultimately touching first in a 7:48.31 with Christiansen hitting a 7:50.11. That swim for Romanchuk is only a few seconds off his winning time in the event back at 2018 Euros of 7:42.96. Aleksandr Egorov and Damien Joly were also present in the heat and tried to catch the leading duo but wound up placing 3rd with a 7:53.32 and 4th with a 7:54.23, respectively.

Swimming in the final heat, Italian teammates Gabriele Detti and Gregorio Paltrinieri swam pretty much the whole race together and ended up touching less than a second apart at the finish. Detti took first place with a 7:50.61 while Paltrinieri followed in a 7:51.33. Paltrinieri should be the favorite to win during the finals considering that he is the European record holder with his 2019 swim of 7:39.27. His second-place finish in the 1500, however, indicates that he may be at less than his best during the pool swimming portion following his triple gold medal haul last week during the open water events.

Sergiy Frolov was third in the final heat with a 7:51.73 which will allow him to join Ukrainian teammate Mykhaylo Romanchuk in the final. Along with those previously mentioned, Anton Ipsen from Denmark and Jose Paulo Lopes will be racing during the 800 free final, having touched with a 7:52.37 for 6th and 7:52.81 for 7th during the prelim.

So intrigued to see what Milak does in the 200 free. Has he just been doing the minimum to get through or does he just lack the front half speed?

i don’t think a 50.4 flier or 48 flat freestyler is lacking in front end speed

I hope he will swim it in Tokyo.

Pretty much like Dressel. Still trying to figure out the 200 free. I suspect they both will figure it out.

I wonder why everyone says Dressel can’t figure out the 200. The dude was the NAG Record holder and was nearly the National High School Record holder in it. He just doesn’t focus on it since he trains for the 50/100 of fly and free. He really hasn’t gone all in for the 200 in years until this season and we’ve yet to see him swim it fully rested and invested.

I think it’s hard for dressel to take it out in a 50.0 untapered. Maybe at trials.

I smell a world record from Peaty today, 26.1 on the first 50 of the mixed medley

Breaststroke should allow dolphin kicks up to 15 meters. Why are the rules different?

That would make short course into hell on earth

Breastroke also has a wierd kick, should we get rid of that too? The entire point of different strokes is that they are different.

that closeup of peaty’s mo 🤮

The greatest smile of the meet: Fanny Teijonsalo after her 100 Free super swim PB. I bet Sun Devils miss that smile…

Tarasevich getting the fina A standard at last. Nice

Greenbank… where the hell did that come from?? In a heat?? Ok king

Geez, Greenbank, figure out the 100 now for your country’s sake. It’s in you.