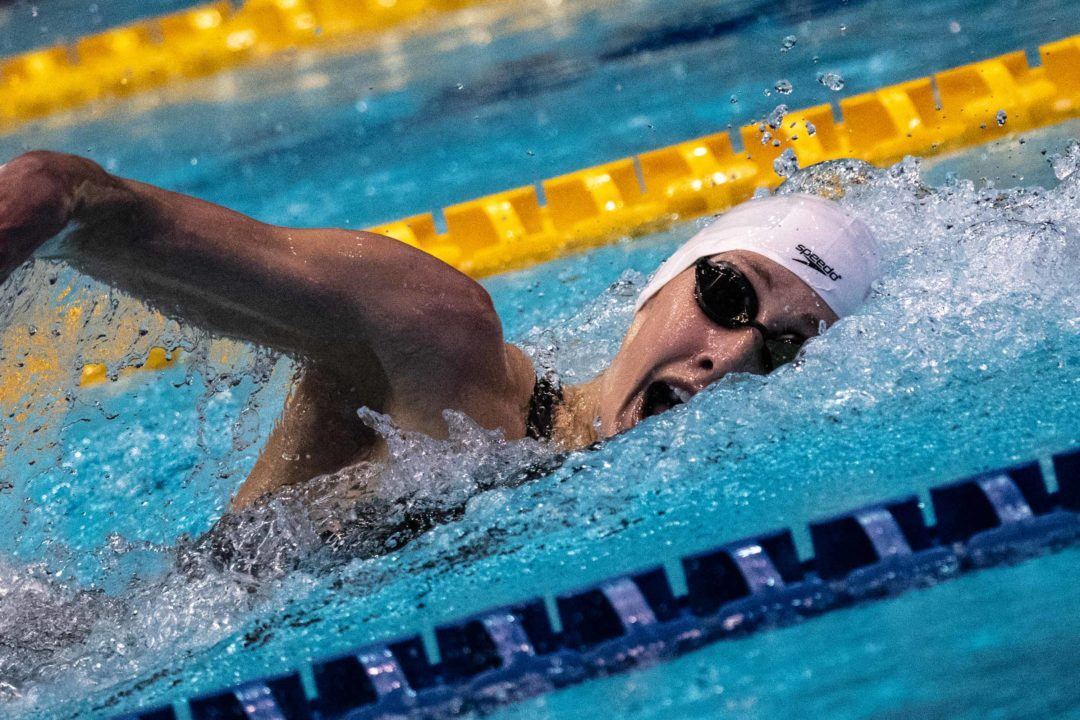 Follow along here for live updates and analysis as racing gets underway on night 4 of the Canadian Olympic Swimming Trials. Archive photo via Mike Lewis/Ola Vista Photography

On the second last night of the 2021 Canadian Olympic Swimming Trials, another set of spots on the nation’s Tokyo 2020 roster will be up for grabs.

In the 200 breaststroke, Kelsey Wog will be trying to join pre-selected Sydney Pickrem in the event in Tokyo which would account for her 3rd event after qualifying for the 200 IM and 100 breast. While the 2019 World Championships bronze medalist Pickrem will race the event in Tokyo, she decided not to swim the event here in Toronto.

On the men’s side, Eli Wall threw down a solid prelim swim of 2:13.94 but will need to get down to a 2:10.35 during the finals in order to secure a spot on his first-ever Olympic squad.

In the 200 butterflies, Mackenzie Darragh and Mabel Zavaros will be in the running to qualify for their first-ever individual Olympic swims during tonight’s final after both swimming roughly 3 seconds over the respective FINA A cuts during the prelims.

The night will end with the men’s and women’s 100 freestyle which are both expected to be absolute bloodbaths for a spot on the team. In the women’s sprint, Taylor Ruck has actually already been named to the team but wound her 3rd in the prelims and will need to fight for a spot in the top 2 in order to show that that selection has paid off. Hoping to upset Ruck, 2016 Olympic champion Penny Oleksiak lead the field in a 54.00 and will be trying to get a spot on the team in the event in Tokyo. It won’t be easy for Oleksiak, however, as Kayla Sanchez, Katerine Savard, Rebecca Smith, and more will all be in the running as well.

As for the men’s event, Yuri Kisil and Ruslan Gaziev both swam under 49 seconds in the morning and will need to stay within the top 2 in order to get an individual spot on the 2020 Canadian Olympic squad. Among those also vying for the individual qualification in the 100 free will be Josh Liendo, Markus Thormeyer, Stephen Calkins, and Javier Acevedo. Missing from tonight’s final will be 2012 Olympic medalist and Tokyo 2020-qualified swimmer Brent Hayden who raced in the prelims but then scratched the final due to back troubles.

Follow along here to stay up to date on all the action as we get into night 4 of the 2021 Canadian Olympic Trials.

Kelsey Wog has added the 200 breaststroke to her event list in Tokyo. She won the event in a 2:23.40, improving on her time from prelims and dipping under the FINA A standard of 2:25.52. She touched the wall 2 seconds ahead of second-place finisher Kierra Smith. Wog previously qualified to swim the 200 IM and 100 breast in Tokyo. She will join pre-selected Sydney Pickrem in Tokyo for this event.

Wog’s time is the 14th fastest in the world this year.

Pickrem scratched the race in finals. She qualified for the Olympics at the 2019 World Championships, where she picked up a bronze medal.

Frederik Kamminga touched second in the event. His time of 2:13.91 was a personal best by 0.87 seconds. He out-touched James Dergousoff in the final 50. Dergousoff dropped 0.5 seconds from prelims. He was the second-place finisher in the 100 breast, but will likely only swim on the 4×100 medley relay after having missed the FINA A cut.

No one in this field has ever swum at the Olympic Games. Because no one met the FINA A standard, and because no one was pre-selected in this event, Canada will not send any 200 breaststrokers to Tokyo.

Rio Olympic medalist Emily Overholt got her hands on the wall first in the women’s 200 fly. Her time of 2:11.16 did not meet the FINA A cut of 2:08.43. She is not known for swimming fly; Overholt previously competed in the 400 free and 400 IM at the 2018 Pan Pacific Championships in Tokyo. She finished 5th in both events. In Rio, she also finished 5th in the 400 IM and won a bronze medal as a member of the 4×200 meter relay.

Canada will also not send a competitor to Tokyo in the women’s 200 fly.

Canadian record-holder Mack Darragh finished in first with a 1:58.10. His personal best time of 1:56.27 from the 2018 Pan Pacs in Tokyo would have easily met the FINA A standard. He swam on the 4×100 medley in Rio but did not qualify for any individual events.

Patrick Hussey finished third with 2:00.51. This was a huge drop for him, taking 3.5 seconds off of his previous best time from 2019. He is now ranked 30th in the all-time Canadian rankings. He previously sat at 107th.

Rio gold-medalist Penny Oleksiak posted the third-fastest time in the world this year with a time of 52.70. She was 0.19 seconds off of her Canadian record, which she set at the 2016 Rio Olympics. She will join Taylor Ruck in Tokyo for the event. Oleksiak was already pre-selected to swim the 200 free for the Canadians.

With Simone Manuel out of the 100, Oleksiak is the only 2016 100 free champion with the opportunity to defend her title.

Kayla Sanchez finished second in a time of 53.77, just off of her best time of 53.57 set a month ago. She was under the FINA A cut but will not swim it individually, but she likely earned a spot on the 4×100 free relay. Sanchez won and qualified for Tokyo in the 50 free yesterday.

Ruck was pre-selected after placing fifth at the 2019 World Championships, going a 53.03. She touched fifth in the event tonight, with a 54.58.

Top qualifier Yuri Kisil injured his arm during warmup and had to scratch the final. He had not yet picked up a spot on the 2020 Canadian Olympic Team. This left the top spot up for grabs tonight.

Joshua Liendo dropped a second to go a best time of 48.13, touching first in the men’s 100 free. He was the only swimmer in the field to meet the FINA A standard. He swam at the 2019 World Junior Championships, where he won a silver medal in the 100 free. He has already been selected to represent Canada in the 50 free and 100 fly.

Liendo overtakes Kisil as the third-fastest Canadian of all time. Kisil’s 48.28 from Rio is now ranked 4th. He now sits at #15 in the world this year.

Silver medalist Ruslan Gaziev dropped 0.5 seconds to 48.81. He has not qualified for the Olympics but he has swum internationally at the 2017 World Junior Championships, the 2018 Pan Pacs in Tokyo, and the 2018 Commonwealth Games. He has also moved up in the Canadian rankings, going from 10th to 6th.

Markus Thormeyer touched third, going a time of 49.24. He has already been selected to swim the 100 and 200 back in Tokyo. He could be chosen to swim on the 4×100 free relay. He was a member of Canada’s 4×100 free relay in Rio, when they took seventh place.

Canada is more likely to be battling the french and Japanese for last spot on 4×100 final.

No. Canada is 4th on the women’s side (behind Australia, China and USA) and 8th on the men’s side (behind Russia, USA, Australia, GB, Italy, Hungary and Brazil). Right now their men are closer to Italy in 5th than to France in 9th, so they have a very realistic shot to make the final in Tokyo (where i don’t see them finishing higher than 6th, while their women could medal).

Is Frederik related to Arno?

Not that we know of.

About 1 in 8,000 Dutch citizens have the last name Kamminga, with most of those in Friesland and Groningen. It’s the 980th most common last name in the Netherlands. So similar in popularity rank to Rubio or Donnelly or Gamble or Gorman or McNeil or Byers in the US. Not exactly super common, but not rare either.

So politically UNFAIR that Ruck was ‘preselected’ on times from 3yrs ago and hasn’t swam near top form …nor looked anywhere near world-class speeds… but has been selected as the Tokyo rep for the 100fr …
SHAME ON YOU SWIM CANADA!!!
Both Kayla & Maggie made OlymA Standard and beat ANY time Taylor has posted recently …
My heart breaks for Kayla. She deserves that spot!!!

Any update on Kisil? Any idea what happened to his arm in warm up?

I would be surprised. My reading of the criteria suggests: no. The current Titley-Atkinson regime doesn’t seem to endorse sending B-standard swimmers. Although …. does Summer McIntosh have a B standard 200m fly?

I can see them entering athletes with B times in an event that has an open slot and if the athlete is already there – the likely candidate here being Gabe Mastromateo in the men’s 100m breaststroke (on the team for the qualified medley relay).

Agree. Imo no way taking athletes with a only Fina B as a stand alone event, especially into a pandemic Olympics.

A swimmer just qualified for a relay can only swim the relay, no individual events, according to FINA rules…
An invitation by FINA is necessary to swim an individual event while not reaching the A-cut.
My guess is there will be no invitations for Tokyo as the maximum number of swimmers is reached with A cuts, relay swimmers and universality places…

There is ZERO reason for SNC to NOT enter someone in this scenario in the individual 100 of that stroke. It only helps the relay for someone like Gabe to get a swim under his belt instead of waiting for 8 days for his 1st swim, if nothing else. And of course it does not take away a place from anyone else.

Will they Ruslan for the relay?

They have McNeil and presumably Ruck will be better. A legit dark horse relay

OUCH (if your not Australian)….

No Macneil for Canada?

If memory serves, McKeon went 52.19 cruising the prelims. So the composite Australian time ought, if anything, to be slightly quicker.