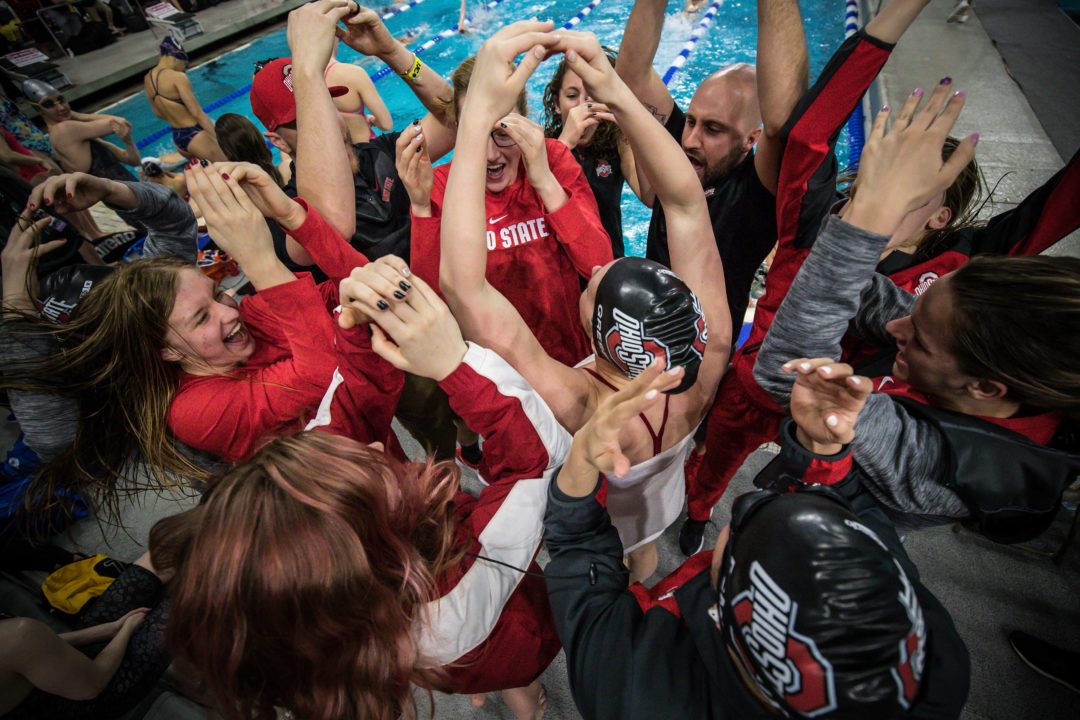 Ohio State's dominance continues with 13 returning swims, all in either the A-final or B-final, setting every Buckeye up for picking up double-digit points. Stock photo via Jack Spitser/Spitser Photography

The 2021 Big Ten Women’s Championships continue in Minnesota with the conclusion of this morning’s prelims session, which included the 100 back, 100 breast, and 200 fly. Ohio State’s depth allowed 13 finals swims for tonight’s session, which is 4 more than the next closest team with the most returning swims. Ohio State was able to earn 5 A-final swims and 7 B-final swims, putting each Buckeye in position to pick up all double-digit points.

In the 100 breast alone, Ohio State is projected to pick up 106 points, led by top seed sophomore Hannah Bach (58.40). The Buckeyes also snuck in two swimmers in the A-final, followed by two B finalists. Ohio State junior Emily Crane earned the second-fastest swim in the 100 back, along with a 9th-place B-final qualifier and a 16th-place B-final qualifier. Into the 200 fly, the Buckeye’s fastest swimmer, senior Katherine Trace, placed 7th in prelims. Another pair of B-finalists qualified in the long butterfly event, including a 16th-place prelims finish, again setting up for double-digit points only.

Having the second-most returning swim and points was Northwestern, bringing in 5 up, 3 mid, and 1 down swim worth 175 points. In the 100 breast, sophomore Hanna Brunzell (59.44) and senior Sophie Angus (59.45) placed 2nd and 3rd in prelims, setting up for a potential 55-point pick-up. Two more Wildcats snuck into the B-final, totaling a projected 78 points. Northwestern junior Miriam Guevara qualified into two A-finals this session, 4th in the 100 back and 2nd in the 200 fly, setting up for a 54-point pick-up. Sophomore Emma Lepisova will join Guevara in the 100 back with her #6 seed.

Michigan will return 8 finals swims tonight, 5 up, 2 mid, 1 down, projecting to earn 171 points. The Wolverines are projected to earn 107 points in the 200 fly, scoring all 4 swimmers into the A-final. Leading the way is defending champion junior Olivia Carter (1:53.61), followed by #3 seed freshman Sophie Housey, #4 seed junior Victoria Kwan, and #8 seed sophomore Megan Glass. While they also are projected to earn 64 points in the 100 back, Michigan will score zero swimmers in the 100 breast. They had graduated last year’s 100 breast champion, Miranda Tucker. Winning an individual event is worth 32 points.

The Wisconsin Badgers will have a solid showing in the 100 back, led by top seed freshman Phoebe Bacon (52.22) and #3 seed Mara Newman. Wisconsin will also score an A-finalist in the 200 fly, #5 seed senior Alex Reddington. In contrast, the Indiana Hoosiers failed to score an A-finalist in the 100 back or the 200 fly, only projecting to earn 20 points from those two events alone. Their top two scorers will swim the 100 breast A-final, led by #4 seed sophomore Emily Weiss and #5 seed junior Noelle Peplowski.

After prelims, the Ohio State Buckeyes are projected to further distance themselves from Michigan for the 2021 team title, with the potential to pass 1,000 points already. Sitting comfy in second are the Michigan Wolverines with a projected 821 points. The Northwestern Wildcats’ projected 175-point pick-up bring them to 599.50 points, which could near the Indiana Hoosiers (619) for third place, of course before adding in platform diving and 200 free relay points. Indiana is only expected to pick up 89 individual points tonight.

Wisconsin is set to remain in 5th place along with Minnesota in 6th place. Iowa’s lone A-finalist, #6 seed in the 200 fly freshman Alyssa Graves, could boost the Hawkeyes closer to the 7th-place Nebraska Huskers. Michigan State’s A-finalist, #6 seed in the 100 breast senior Erin Szara, could also boost the Spartans ahead of Illinois for 12th place.

There is a difference between the current scores on meet mobile and the scores in this article. Any idea why?

I believe there was a lag in MM catching up to diving scores, and this list was produced before that happened.

Will look at it now and get it updated.