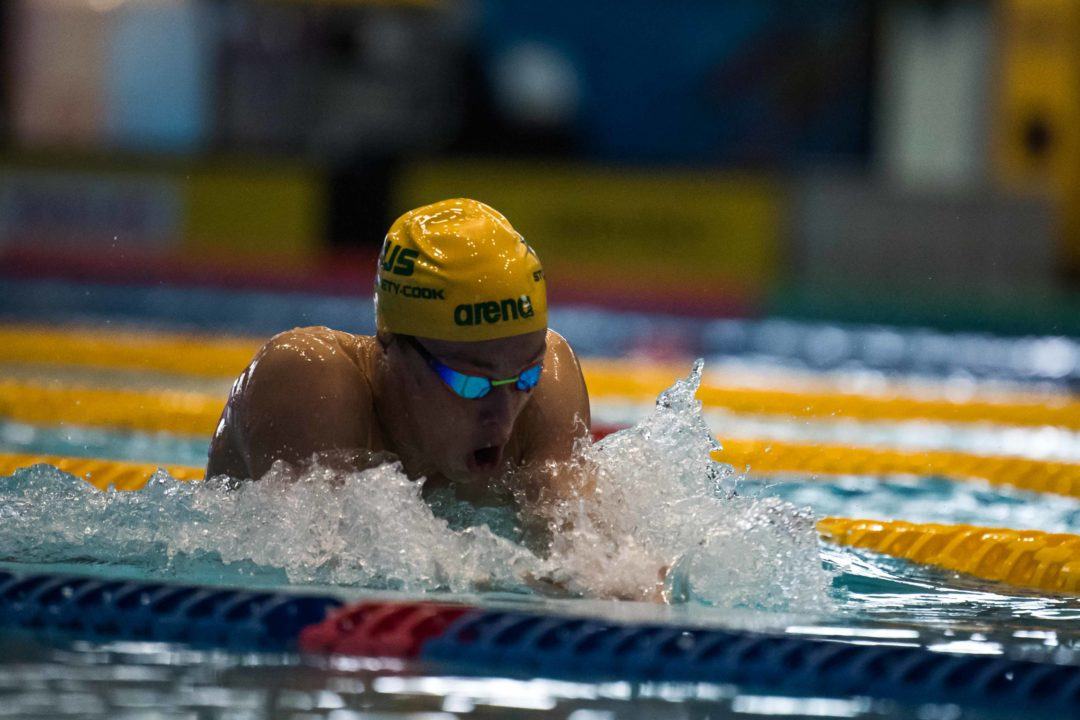 Zac Stubblety-Cook and Matthew Wilson are set up for another breaststroke duel on the final day of the Australian Swimming Championships: the 200 breast. Archive photo via Mike Lewis/Ola Vista Photography

Look out for 19-year-old Kaylee McKeown, who already came close to a world record in the 100m back. She has more racing to do in Sydney.

Australia’s Emma McKeon is tearing up the pool at this week’s Sydney Open, this time doubling up on gold in the 100m fly and 50m free.

We can look forward to some exciting races on the final day of the 2021 Australian Swimming Championships including swims from National Record holders Cate Campbell and Holly Barrett in the women’s 50 free and 50 fly.

Campbell has an especially close race set up with Emma McKeon in the 50 free, after the two battled in the 100 free final on day 2 where McKeon took the win. On the men’s side, just .38 separated 1st through 4th place in the men’s 50 free prelims, a field led by Hungary’s Maxim Lobanovszij.

The 200 breaststroke is set up for duels on both the men’s and women’s side with Abbey Harkin and Jenna Strauch separated by .38 in prelims and Zac Stubblety-Cook and Matthew Wilson by .43. Cook claimed victory in the 100 breast final over Wilson the other day.

Stay tuned for a live recap and analysis of the finals session.

Campbell’s younger sister Bronte came into the wall in 3rd place. Cate’s victory has made it so a Campbell has won the event every year since 2012.

She discussed the ups and downs of competing in the finals during the morning, thinking back to the 2008 Bejing Olympics. “It really does come down to mindset…I think that you need to be able to stand up and race when it counts and we’ve seen some great racing this weekend.”

It looked like Chalmers got off the blocks first on video, but his reaction time of .68 was actually the slowest in heat. Not by much, though, and clearly it wasn’t race-deciding. Chalmers took one-third of a second off his prelims time to beat Lobanovszij by .13 and sweep the 50, 100, and 200 freestyle events at the Australian Swimming Championships. Though, his lifetime best still stands at 22.07 from 2019. Jack Cartwright gave Lobanovszij a run for his money, coming within .04 of Hungarian Lobanovszij.

“I saw a memory come up on Facebook yesterday that I was 22.6 when I was 15,” Chalmers laughed in a post-race interview. “So I don’t think I’ve improved much since then but it’s good to do the splash and dash and have a bit of fun with the boys.”

Going into the 3rd turn,  Harkin had a half-a-body length lead on Strauch. But after the push off they were dead-even for the majority of the final length. After a bit of back and forth, Harkin touched the wall 1st right on her lifetime best time of 2:25.12 from 2019. Strauch was able to break 2:25.00 at the Queensland Championships in December, ranking herself 14th in the world this season:

Zoe Deacon was able to close Strauch’s 2.5 second lead at the halfway point slightly, touching the wall in 3rd at 2:27.20.

A beaming Harkin explained that she’s targeting both the 100 and 200 breast at the upcoming Olympic Trials in her post-race interview. She took 2nd place in the 100 breaststroke final on day 2.

Zac Stubblety-Cook won this race all within the last 25 meters. Former world record holder Matthew Wilson held a solid lead on the field, looking strong and gliding all the way to the 15-meter mark on his initial underwater. But Stubblety-Cook really picked up his tempo and pushed past him on that last lap, effectively sweeping both breaststroke races at this meet after winning the 100 breast final on day 2. Stubblety-Cook’s season best time, 2:07.96 ranks him 6th in the world this season while Wilson’s ranks him 10th.

Daniel Cave claimed 3rd place, remaining about 4 seconds behind the battle between Stubblety-Cook and Wilson throughout the halfway point. His lifetime best, 2:10.38, is from August 2019.

“I was pretty happy with that swim, considering the time of the season,” Stubblety-Cook told post-race reporters, referring to the fact that most competitors, himself included, did not taper for this meet as they will for the Australian Trials in a few weeks.

It’s rare that a 50 of any stroke is not a tight race. 33-year-old Holly Barrett did not let anyone come close to her during this 50 fly final, as even the announcers knew she had it at the halfway point. She has now won this event 3 times at the Australian Swimming Championships, now becoming the oldest woman to win it at this meet. This time ranks her 5th in the world this season:

Madison Wilson and Sasha Touretski battled it out for 2nd place, with Wilson touching the wall 1st with a time of 26.92. Both swimmers improved upon their prelims times and Touretski out touched 19-year-old Abigail Schoorl by .01 to snag 3rd place.

“I’ve gotta say when I was a little girl starting my swimming career, being the oldest at everything wasn’t really on my mind,” she laughed in her post-race interview. “But, I’m still loving it obviously… I still feel young, I feel like an underdog most of the time…it’s really good to have younger girls as well pushing me along.”

21-year-old Shaun Champion defeated defending champion William Yang by being the only swimmer to crack 24 seconds. Unlike the women’s 50 fly, this was anyone’s race and Champion went for it. This was Champion’s first time under 24 seconds as he set his previous lifetime best at 24.01 during the 2019 Australian Championships.

Yang’s season-best time of 23.56 from the 2021 New South Whales Open Championships ranks him 19th in the world this season:

Edward Marks fended off 3 swimmers within one-third of a second of him to snag 3rd place with a time of 24.25.

“Feels a bit surreal … Just happy that things worked out,” Champion said humbly with a smile during his post-race interview. “I’ve dropped a lot of time this season, training’s been going really well … The 100 is definitely my main focus going forward for Trials, so we’ll see what happens in June.”

Despite battling a shoulder injury earlier this season, Ariarne Titmus swept the 200 free, 400 free, and now the 800 freestyle events. She held her lead throughout the race, but Maddie Gough pushed her just a body length and a half behind. This time, which Titmus called “not great” in her post race interview, ranks the 20-year-old 4th in the world this season:

“That one hurt more than I remember. You know, the time’s not great but I’m happy to hang on and get the win,” Titmus said. “This week is pretty much another week of training for us, lots of racing, last night was my first session off. So it’s been a long week but I’m happy to finish it now with an alright swim.”

Kiah Melverton kept up with Gough through the 400-meter mark, until Gough pulled away during her chase with Titmus. Melverton claimed 3rd about 7.5 seconds behind Gough.

Distance and open water specialist Nick Sloman clocked a lifetime best time to win this event, crushing his previous best from the 2020 Queensland Championships. Sloman noted during his interview that there was added pressure to perform well at this meet, because during the official Australian Olympic Trials in 4 weeks he will be in Portugal competing at the Open Water Championships.

“Probably won’t be good enough, but I’m still happy with a 15:02,” he said. “Obviously doing a good time here is in the back of my mind, but the Open Water is the main goal so still all eyes ahead for that race.”

This new lifetime best ranks Sloman 10th in the world this season, right behind McLoughlin:

18-year-old Thomas Neill snagged 2nd ahead of Jack McLoughlin, about 8 seconds off his lifetime best from 2019. This podium looked very similar to the 800 free podium where Neill took 1st place, McLoughlin 2nd, and Sloman 3rd.

Chalmers said in an interview that the shoulder problem isn’t entirely gone.

How quickly your unbridled excitement switched to just “positives”. Titmus is #2 this season with this swim. And this result stands about same far percentage wise from her personal best in this event as it was in the cases with 200 and 400 races. Nothing new has happened today. That is her form at the moment.
Arirna Titmus is the best that has happened to the Australian women swimming during last decade if not longer. Should Katie Ledecky were out of the picture then Arirna Titmus would have all media attention as the world class swimmer at the broad range of events from sprint to long distances. It is just her bad luck that Katie Ledecky’s phenomenon did happen… Read more »

Don’t forget that Ariarna is fully rested for this meet.

Actually she is ranked 4

If you go by the Speedo Rankings.

If swimswam wants to stay with the college season definition in their ranking procedure then that is their problem.
If Kirpichnikova swam recently at Russian trials being specially prepared for this meet to pass qualification requirements and get selected to race this event in Tokyo then I would consider 8:24.84 her current best form. Why should I care how she swam back in December. Too many things happened since then.
I have heard nothing about Wang this season and can look up of course what she did last September. But it would be so unreliable thing to do that would rather prefer no information about her readiness for OG then to be misled by outdated info.

Whatever…
You like it – use it. Why should I change or criticize your habits.
I prefer FINA ranking procedure that is around calendar year and I have my reasons for that.
I actually can specify the ranking time frame and that is the right way to provide ranking service IMO

In general i agree with you on this one. I would rather look at the best times of the year (so far) instead of rankings for the season. The obvious problem with that is that some swimmers haven’t had an opportunity/reason to race fast this year, while pretty much all of them (in normal times) had at least one opportunity/reason within the last year, so in that sense seasonal rankings might give a better picture.

I don’t necessarily agree about Kirpichnikova. I don’t know what the russian standard was, but maybe she just did enough to get under it and wasn’t at 100 %?

Not sure if this meeting tells us much about Titmus’ medal chances in Tokyo. I think… Read more »

In the case of Kirpichnikova the qualification time wasn’t the only motivation factor. Russian national record in front of home crowd and strong rivalry with Anna Egorova. On the women’s side of these trials 800 race was the best spectacle of the meet. They both got on the team in this event suddenly becoming if not a medal contenders then finalists for sure.

The pandemic has limited athletes from countries hit hard by the fourth wave in calendar year 2021.

Why does my credibility bother you that much? 😀
Let it be a concern of my relatives.
Also against the background of my bunch of crock your greatness is shining even brighter 😀

Your argument holds no weight.

Probably cos it’s not top 5.

Its not even on the top 25 list. I do no think swimswam always updates or they miss some. Hopefully they fix it soon

You get my point.

Of course 🙂 Torri should be ranked 9th right ahead of Weitzel.