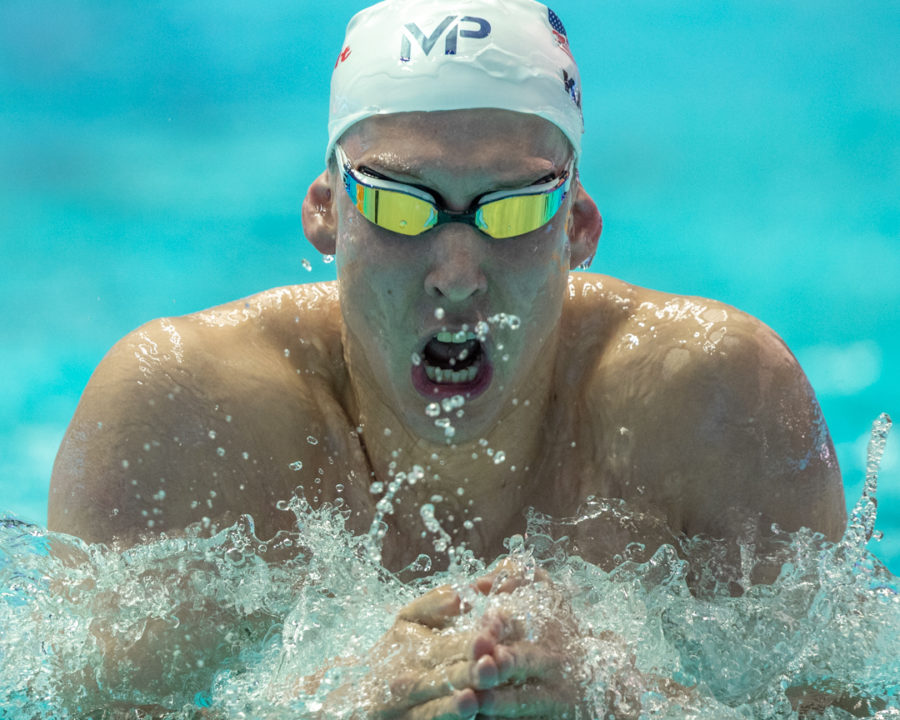 Today's sessions will feature 2017 World Champion Chase Kalisz in the 200 IM, along with Harvard star Dean Farris making an appearance in the 50 free. Archive photo via “Rafael/Domeyko Photography”

Today’s morning session is broken into a women’s flight and a men’s flight. The women’s flight should run from about 10 AM to 11 AM Eastern time, with the men’s session from 11:15 AM to 12:15 PM Eastern.

Today’s sessions will feature 2017 World Champion Chase Kalisz in the 200 IM, along with Harvard star Dean Farris making an appearance in the 50 free.

NC State’s Eric Knowles is the top seed into the men’s 400 free.

Open water standout Ashley Twichell won handily here, going 4:13.86 to pace the field by almost four seconds. Twichell’s career-best came from last summer at 4:07.77, and she’s been under 4:10 three times in her career.

Her TAC Titans teammate Caroline Pennington was second in 4:17.61. That’s a huge drop of more than five seconds for the 17-year-old Pennington. Pending the results of other U.S. Open meets across the country, that time would be the fastest in the nation this year among 17-18s, though we know of at least three others (Emma Weyant in Sarasota; Rachel Stege and Mariah Denigan in Indy) who will move ahead of her in those ranks.

Virginia Tech freshman Chase Travis was third, but about 7.8 seconds from her personal best.

Gyorgy is wrapping up her collegiate career this year as a senior for Virginia Tech. She sat out last season on a redshirt. The Hungarian national was 2:14.95, about 1.2 seconds off her career-best time from the spring of 2019.

Curzan, competing for the TAC Titans, cut a tenth from her lifetime-best. That also moves her from #13 to #8 all-time in USA Swimming’s age 15-16 rankings for the 50 free. Curzan passes up Olympic champ Missy Franklin, who was 25.26 at age 16. The National Age Group record is a 24.71 from Gretchen Walsh, though only three 15-16 girls have ever been under 25.0 in USA Swimming’s history.

18-year-old Lindsay Flynn also dropped time from her previous best, going 25.37 for a drop of three tenths. Flynn was originally a verbal commit to Indiana, but later switched her verbal to Big Ten rival Michigan.

He beat senior Wolfpack teammate Eric Knowles by about three tenths of a second. Dant led narrowly the entire way, though Knowles continued to push him, never falling more than seven tenths of a second behind at any point. Knowles’ career-best is a 3:48.34 from Summer Nationals in 2019.

Chase Kalisz easily led the field here, taking over for former Georgia teammate Jay Litherland on a huge 34.0 breaststroke split. Kalisz pretty much matched Litherland on free (29.5 to 29.4), which is impressive given Litherland’s renowned closing ability. Kalisz was 1:59.72 for the win. That should rocket him to the top of the U.S. ranks this season – pending results of the eight other U.S. Open meets this morning, no man had been under 2:00 yet this year in the U.S. ranks.

NCAC 17-year-old Sam Hoover had a huge time drop for third place. He came in with a short course yards seed of 1:47.0 and a lifetime-best in long course meters of 2:08.7. Hoover dropped more than seven seconds to go 2:01.65. Hoover is a high school senior and NC State commit. We had him ranked #7 among all high school seniors in the nation based mostly on his freestyle speed, but he’s also showing some great IM ability in his final year of high school.

It was Gardner-Webb alum Nathaniel Lile in second place in 22.67. He’s been as fast as 22.56 before in the summer of 2019, but this should be the second-best swim of his career. Aaron Greenberg was about a tenth off his lifetime-best in third, but did his his best time since 2018, when he went 22.6 on five separate occasions.

Great performances in season by the Wolfpack men

Promising performances by the distance crew. Curious to see how these guys will do with a little rest!

Joe Schooling with the 200 IM and 50 fly back to back! Interesting. I hope he’s putting in some good work

Announcer got that wrong, pretty sure that was Matthew Josa and Joe was in Lane 8.

Caroline Pennington is 17, I believe