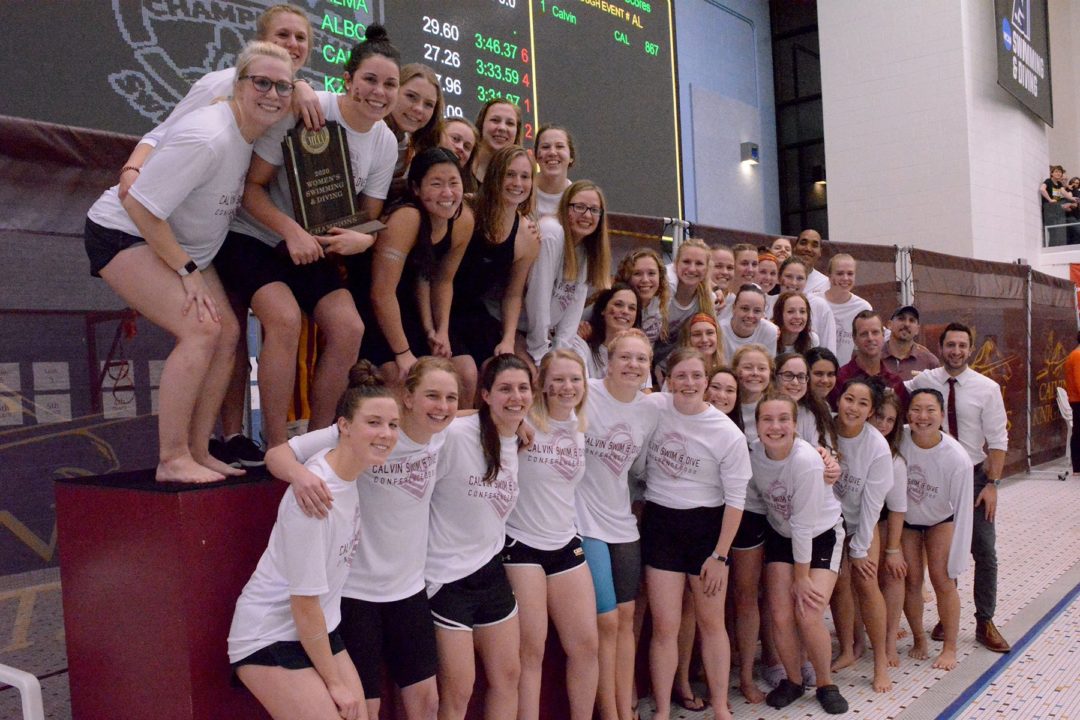 After losing their 14-yr streak to Hope in 2019, the Calvin women won back the MIAA team title on Saturday. The Albion men also defended their team title. Current photo via Michigan Intercollegiate Athletic Association

The final two days was a tough battle for both genders of the 2020 MIAA Championships held at the Venema Aquatic Center in Grand Rapids, MI. On the men’s side, the Albion men had a monstrous Saturday night that propelled them past Calvin, defending their 2019 MIAA title. The Calvin women, who lost their 14-year streak to Hope last year, re-gained the MIAA team title at their home pool on Saturday by 10 points.

The Albion Brits started Friday in third place but utilized their deep field to catch up to the first-place Calvin Knights. In the 200 medley relay, Albion took the win at 1:30.12, powered by Evan Wonner‘s 21.46 fly split and Len Ciemniecki‘s 19.99 free anchor. The title-winning relay currently ranks 12th in Division III. Calvin’s relay took second at 1:30.99, yet swam a 1:29.95 during a time trial Saturday afternoon, ranking 9th in D3.

Into the 100 breast, Albion senior Tyler Kimbrell completed a career 4-for-4 sweep in the 100 breast, sealing the title in 55.63. Kalamazoo’s Brenden French also swam under 56 seconds, clocking in the runner-up time of 55.97.

Albion’s Kimbrell then capped his MIAA career with another 4-for-4 career sweep in the 200 breast (2:02.75), making that a perfect 4-year breaststroke sweep in the conference from 2017-2020. Junior teammate Jake Huttenlocher took a tight second place at 2:02.92. The Brits once again had 4 A-finalists, finishing 1-2-6-8 in the event.

The Albion Brits then successfully defended their 2019 title with 933.50 points, making this their 3rd title in 4 years with the inclusion of their 2017 win.

Albion senior Rileigh Eding zipped to the early lead in the 100 fly final, but she slowly decelerated and it became a four-woman race during the finishing 10 yards. At the finish, Eding (57.12) touched out Calvin junior Jenna Oezer (57.20) by 0.08s for the MIAA title while Albion junior Tia Ulieme (57.24) settled for third place by 0.04s behind Oezer.

After leading off the 200 medley relay (1:44.19) to victory, Calvin junior Hannah Chao stormed the 100 back to win her first individual MIAA title at 56.10. Hope senior Nicky McCann finished 0.26s behind Chao at 56.36 while Calvin senior Abbey Wellman sealed third place at 57.30. Looking at the D3 ranks, Chao sits in 17th while McCann is tied for 24th.

The 200 fly final would feature a thrilling battle between Hope’s Emmert and Albion’s Samantha Swingewood. At the touch, it was Swingewood who took out Emmert by 0.40s for her second MIAA title of the weekend at 2:07.00.

On the 1-meter diving boards, Calvin junior Hannabeth Magnussen completed a diving sweep with her MIAA title-winning score of 455.75 points.

In the 400 free relay, the Calvin Knights led from start to finish over the Kalamazoo Hornets. At the finish, the Calvin women would then seal the MIAA team title with a 3:31.07, Kalamazoo settled for second at 3:32.20. The Hope women would seal their runner-up team finish with their third-place time of 3:33.15.