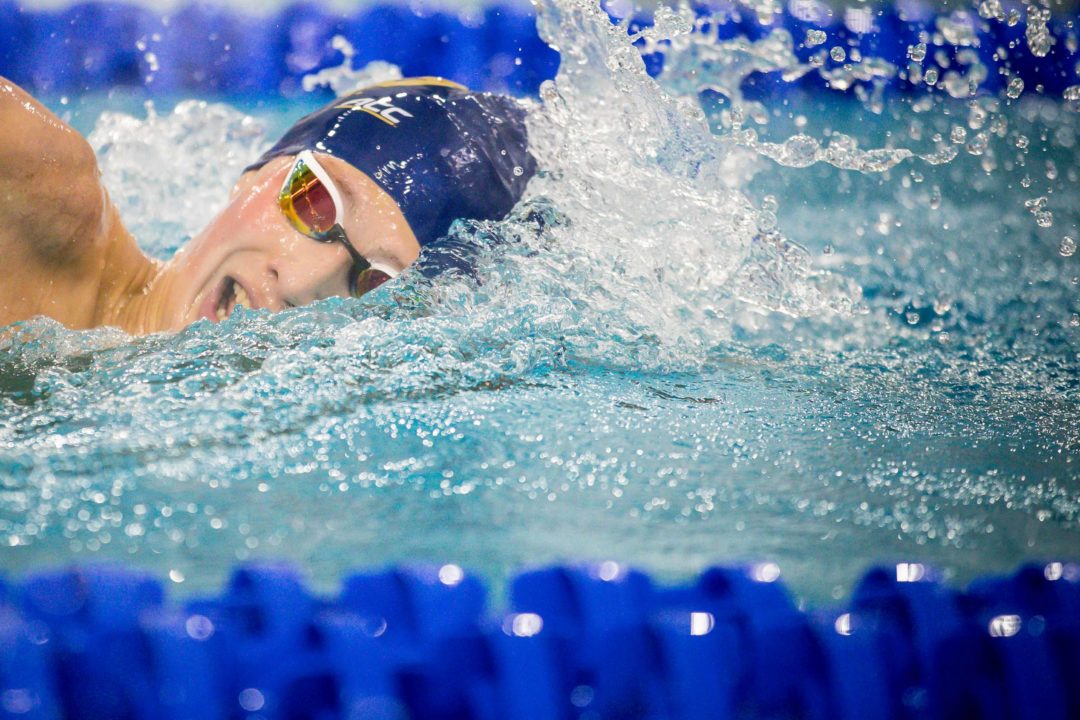 The first full day of the 2020 ACC men's championships gets underway this morning in Greensboro with prelims of the 500 free, the 200 IM, and the 50 free. Current photo via Jack Spitser/Spitser Photography

The first full day of the 2020 ACC men’s championships gets underway this morning in Greensboro with only three events.

In the first event, the 500 free, defending champion Eric Knowles of NC State will be swimming in the fifth heat. Zach Yeadon is of Notre Dame is the top seed, leading what should be a strong distance crew for the Fighting Irish. This will be a fairly new-looking A-final this year, as only four of last year’s top eight swimmers return.

Georgia Tech junior Caio Pumputis is both the defending champion and the top seed in the 200 IM. Last year, he was over two seconds faster than the next-fastest returner, Louisville junior Daniel Sos, who sits second on the psych sheet.

The 50 free could be the race of the day. Pitt’s Blaise Vera and NC State’s Nyls Korstanje sit the at top of the psych sheet; Vera has been 19.10 this season, while Korstanje has been 19.11. Last year, Korstanje finished 4th in the A-final, just 0.01s ahead of Vera. But don’t miss Louisville junior Andrej Barna. He finished 2nd in this race last year, but will be swimming in the very first heat this morning after missing much of the season and getting seeded without a 50 free time.

Notre Dame’s distance crew has been impressing all season, and they’ve carried that momentum into this morning’s prelims session, as they put three men into the A-final of this event.

Junior Zach Yeadon led the Fighting Irish – and everyone else – with a 4:14.03 swim this morning. That’s over two seconds better than his prelims time here last year, where he ultimately finished 6th. Teammate and freshman Jack Hoagland put up the 3rd-fastest time of the morning with a 4:14.58. That’s a new lifetime best for him by over two seconds, and he’s now over eight seconds faster than he was coming into college. Junior Sadler McKeen also made the top eight with a 4:18.06; he finished 10th in this event last year.

NC State got two of the top four seeds. Like Hoagland, freshman Ross Dant lopped a good chunk of time off of his lifetime best, dropping from 4:17.16 to 4:14.57, to take the #2 seed. Defending champion Eric Knowles went 4:15.26 for the 4th-fastest time this morning; that’s about a second and a half slower than he went he prelims last year.

Three other schools each put one swimmer into the top eight. UVA freshman Jack Walker qualified 5th with a time of 4:16.89. He’s been 4:15-low twice, both in high school and earlier this year at the UT Invite. Virginia Tech sophomore Antani Ivanov hit a new lifetime best with a 4:17.52 this morning; last year he finished 12th here with a 4:18.22, his previous lifetime best. UNC’s Dimitrios Dimitriou also made the A-final with a 4:17.77. Last year, he didn’t make it out of prelims, finishing 32nd overall.

Louisville’s Evgenii Somov led this morning’s prelims with a new lifetime best of 1:43.48, over a second and a half drop from his previous best of 1:45.02 from the 2018 ACCs. Somov finished 18th last year. Teammate Daniel Sos also made the A-final, putting up the 3rd-fastest mark of the morning with a 1:43.70. Sos finished 4th last year.

UVA also put two men into the top. Ted Schubert had the 2nd-fastest time of the morning with a 1:43.68, just off his lifetime best. Schubert took 6th last year. Teammate Casey Storch took 7th this morning with a 1:45.08; that’s about a second and a half faster than his prelims time from last year, where he ultimately won the C-final with a 1:470.

Defending champion Caio Pumputis cruised to the #4 seed this morning with a 1:44.67. Last year, that time would’ve meant he was out of the A-final, but look for him to drop a good chunk of time tonight. NC States’s Erge Gezmis, swimming in his first ACCs after transferring from Florida, knocked nearly four seconds off of his lifetime best this morning, taking 5th with a 1:44.85. Pitt’s Samy Helmbacher (1:44.92) will swim into tonight’s A-final after winning the B-final last year, and Virginia Tech’s Samuel Tornqvist (1:45.29) once again made the top eight; he finished 5th last year.

NC State sophomore Nyls Korstanje came within 0.03s of his lifetime best this morning, taking the top seed for tonight with a 19.07. He’ll be the only Wolfpack swimmer in the top 8, although the program known traditionally as a sprint powerhouse did put three men into the B-final.

The Louisville Cardinals, though, will have three men swimming in the A-final tonight after only having a single swimmer score at all in this event last year. Mihalis Deliyiannis led the Cards with a new lifetime best of 19.25. Andrej Barna, last year’s runner up, went 19.43 this morning for the 5th-fastest time, and Abdelrahman Sameh went 19.52 to tie for the #6 seed.

Pitt Blaise Vera and Virginia Tech’s Tommy Hallock tied for the #3 seed, both swimming 19.32. Vera came into today with a 19.10, while that’s a new lifetime best for Hallock by two-tenths of a second. Hallock turned heads last night with a 18-mid anchor leg on the medley relay that was the fastest legal split in the field.

FSU showing why they are never taken that seriously

When will we be able to see the men’s results? The link still shows results for the women.

A lot foreign athletes on North Carolina state and Louisville.

Florida State has more than both

NCS gets a lot top international talent but they also get the best talent from in NC which is producing major high school recruits.

One of the assistant coaches for Louisville is from Kazakstan if I remember right. Probably helps him to connect with foreign athletes pretty well as they have a lot of swimmers from Russia/Eastern Europe.

Guntoro has been a big international recruiter for NC State.

Not saying you’re wrong, but who is foreign on NC State besides Korstanje and Gezmis?

Looks like NCST is a lock at #1
Louisville should lock in #2 after tonight’s relay and swims
Battle for 3rd between UVA, FSU with UVA on the upperhand
Battle for 5th between ND and VT
GT, UNC, Pitt fight for 7th
Duke locked in 10th
BC lookin like a solid 11th

Louisville is 50 points behind UVA currently, and the seeding comparison between them and UVA tonight is very close. They will likely make up some points, but to say they are a lock for 2nd is premature. FSU got 1 A finalist though – not premature to say they are out of the running for 3rd, especially since their best event was today.

Pittsburgh is moving up the ladder with 3 swims tonight.

Pitt almost best UVA in the 200 medley relay yesterday and are on fire again today. They are quietly becoming the up and coming team in the ACC!

They are in ninth….

Playing “the place” card after the first day which is heavily affected by diving is weak.
Regardless tonight will be fun because no one will be able to put the Blaise out!

That 200 FR battle between FSU/NCSU/Lousville tonight should be epic.

And just like that UVA is back in the race….. for 3rd!

But they play first fiddle!

In case you miss the irony, thats why his name is “AuggieBuschFan”. He is a fan of Augie because he short term destroyed the UVA mens team.

honestly, i don’t really care about the irony or any joke he/she is making. it is petty and childish to sit behind a computer screen and make condescending & unproductive comments towards a team of 18-22 year olds who have worked hard all year and are dropping time.

Just saying, he very well may be an 18-22 year old on one of the competing teams…

Funny… where were you last week with all the comments??

The women are fast no question….. So of course I wont talk smack about them that makes no sense. So thats actually not funny