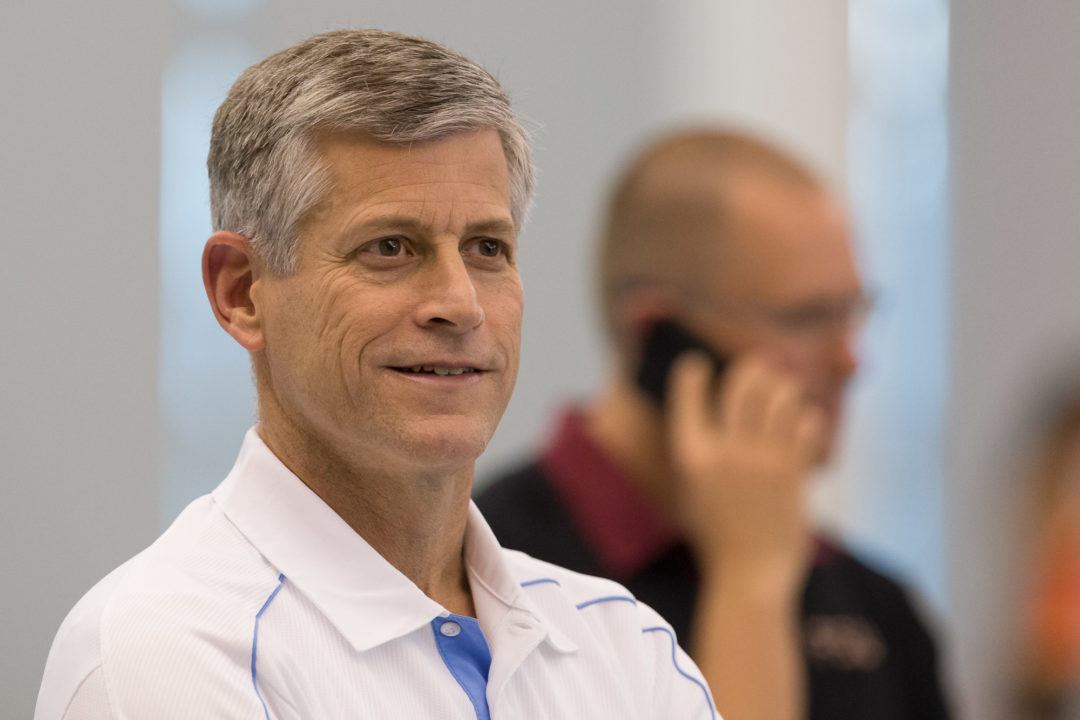 The UNC coaching job, vacated by Rich DeSelm, is one of the biggest jobs open so far this offseason. Archive photo via Tim Binning/TheSwimPictures.com

Two weeks after the conclusion of the 2018-2019 NCAA swimming & diving championship season, the collegiate coaching carousel has begun to turn, quickly.

For the first time in a few years, we didn’t have any coaches departing jobs during NCAAs, but a big retirement from Alabama head coach Dennis Pursley, announced on Wednesday, sent the offseason into overdrive.

Here are the Division I head coaching openings that we know about so far:

Along with a couple of already-announced assistant coaching openings at big-time programs, including Tennessee assistant Christian Hanselmann, who announced he was heading back to club swimming yesterday, things are heating up on the circuit.

This man is the Goat.

Indiana ast / sprint coach position is advertised. Was this Coley’s position? Did he get one of the head positions currently open?

***Update – Kirk Grand is listed as the ast sprint coach at IU. So, this is not Coley’s position. So, did Kirk get one of the head jobs?

I thought Coley got the UNC job?

3 of the programs on this list will be looking for new coaches after a coach was hired less than a year ago. What is going on with those programs?

This past season at GW was divisive, confusing, and heart-breaking. I don’t agree with the abrupt termination of the coach, and the lack of clarity from the AD, but our team needs to move forward after a disappointing season.

Has Mizzou settled their coaching situation yet? I see they still have Greg listed as head coach, after he was suspended for nearly all of the season.

I imagine they have to wait until the investigation’s concluded to make an official decision, and things like that can take a long time (lots of paperwork and lots of pressure to not make any mistakes evaluating the evidence). Mizzou had a pretty successful season, I can see Grevers being promoted to non-interim head coach if it turns out Rhodenbaugh is out.

As a former Nevada Assistant, I can attest to the quality of the university and the department. Keep up the great work coach!

Does anyone know where in Minnesota Matt Bos is moving?

Is there a vacancy at Youngstown State as well?