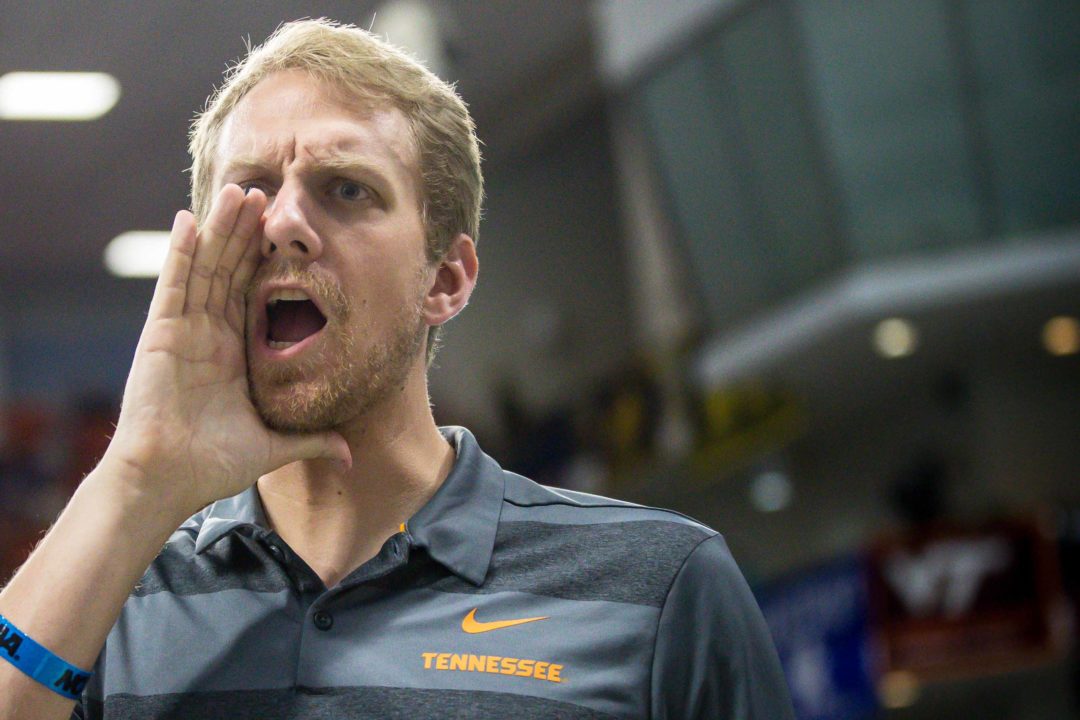 University of Tennessee assistant coach Christian Hanselmann accepted a job with the Carmel Swim Club in Carmel, Indiana, he announced on his Twitter feed on Wednesday.

“Coaching at Tennessee has been an incredible experience,” Hanselmann said in the post. “I have worked with some truly amazing people.

“As sad as I am to leave Tennessee, I am just as excited to work with everyone at Carmel!”

Coaching at Tennessee has been an incredible experience. I have worked with some truly amazing people.

I have accepted a position to coach at Carmel Swim Club. As sad as I am sad to leave Tennessee, I am just as excited to work with everyone at Carmel! pic.twitter.com/xHhsJE7FBF

Hanselmann spent the last 2 seasons as an assistant at Tennessee. This marked his 2nd stint with the program, after having previously served as a graduate assistant for the University of Tennessee while working with the master’s program and elite high school group at the affiliated Tennessee Aquatics club team.

Prior to his return to Tennessee, Hanselmann spent the 2016-2017 season as an assistant coach at Eastern Michigan. In his year there, the EMU men won their 34th MAC conference title, while the women finished 2nd. The men’s team would be cut a season after his departure.

In the two seasons of his 2nd go-around with the Volunteers, the women finished 8th and 7th at NCAAs, respectively in 2019 and 2018; while the men finished 11th at NCAAs in both seasons.

He’ll join the staff of one of the most successful club programs in the country. The Carmel Swim Club, located in suburban Indianapolis, has 3 swimmers on the current 2018-2019 USA Swimming National Team. At Tennessee, Hanselmann worked with one Carmel Swim Club alum: Trude Rothrock, who was a freshman this past season.

Congrats Christian! You deserve it! You were an excellent coach when we had you and you’re going to do great things in Indiana!!

Interesting. It almost seems like a step down. I assume it is not since he took it though. The pay must be better, much better… or he is from there and wants to move “back home”. Either way, taking a new job is always exciting and definitely good for him and his family. I just wonder what the pay difference is going from college to club team.

As someone who knows Christian personally and spoke to him about the move- it’s definitely not a move down. His family and his wife’s family is from Indiana. He’s the type of coach that will be successful wherever he goes.

Carmel indiana has been voted best town to live several times and the Carmel swim club is an outstanding club. I’m sure he’s being taken care of $$ or he wouldn’t be taking the position. This program cranks out junior national elite swimmers every year and is the winningest high school girls program in history. Pretty exciting group to be a part of.

That’s pretty much what I was asking about and assumed… the money thing. MK330 said he and his family are from Indiana, so that makes sense, the other part would be the money. I just wonder how much more the money is compared to what it was at UTK…. I did say “almost” a step down. I do not think it is, but you do not see many college coaches going back to club coaching. Marsh is the only example I could think of, but that’s a whole thing I dont want to get into and the press on that move said it was more of an “ease into retirement” thing. I know it is hard to tell on these… Read more »

2 cents That’s a legit point. You don’t see it often. I guess my point is if any club job wouldn’t be a “step down” Carmel swim Club is one of the very few. The CSC organization knows the talent and tradition they have and so I’m sure they are trying to recruit the very best they can find. To be honest not too many club coaches I’ve seen would have what it takes to keep elevating the program to what the current head coach, team, and parents expect. So I see this as a big compliment to Christian.