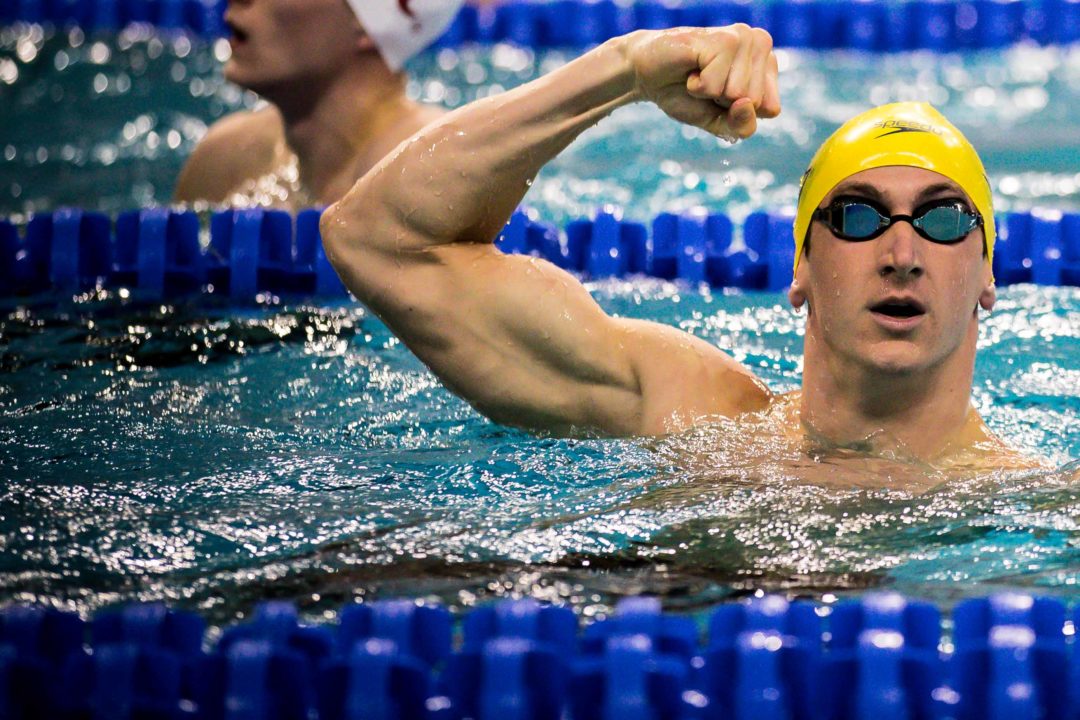 The Cal bears look to bounce back from their 3rd place finish in the 800 free relay, with Andrew Seliskar and Ryan Hoffer leading the charge with top seeds. Current photo via Jack Spitser/Spitser Photography

After getting shut out of winning the 800 free relay on Wednesday, the Cal bears bounced back in prelims on day two of the 2019 NCAA meet. The Bears hold 3 of the top seeds going into finals tonight, propelling them ahead in the team race.

In prelims, Cal improved from their day 2 seeds by 52 points, putting them well ahead of next contenders Indiana and Texas. Cal currently holds 4A/4B finalists while Texas has 3A/2B finalists. With this improvement for Cal, it can surge them nearly 80 points ahead of Texas when adding up the last 2 days and the 2 seeded latter days.

In tonight’s session, Cal’s Andrew Seliskar will look to earn his first individual title while the men’s 50 free will crown its first non-Dressel victor in 4 years. Hopeful to defend their 2018 titles is Townley Haas in the 500 free and the IU Hoosiers 400 medley relay. Here’s what to look out for in tonight’s finals session event-by-event:

Cal is the only sub-1:15 relay, with Seliskar putting up a 18.53 anchor along with Ryan Hoffer, Pawel Sendyk, and Michael Jensen all comfortably under 19 on their parts. With Tate Jackson proving concerns about his health wrong, him and the rest of the Longhorns will have a great battle with the Bears. What makes the battle for the top more interesting is that Cal sided with its best line-up in prelims while Texas rested one of its finals legs. In the case that Texas uses John Shebat with Jackson, Drew Kibler, and either Jake Sannem or Daniel Kruger, it could really alter the battle for the top.

A change-up in relay members for #2 seed NC State can also shake up the race going into tonight. If the Wolfpack chooses to swim Coleman Stewart in the race, they could have to face potential changes in other relays.

Townley Haas has a big shot at defending his 2018 title, but Cal’s Sean Grieshop could be a big block standing in Haas’ way. The pair swam side-by-side in their prelims heat, with Grieshop nipping Haas until the end of the race. Tonight, Grieshop will have a second opportunity to race Haas and aim for a sub-4:10 swim.

Potentially pushing out Grieshop in the race for sub-4:10 are Arizona’s Brooks Fail, South Carolina’s Fynn Minuth, and Michigan’s Ricardo Vargas. They came into the meet with 4:11 seeds, however, Haas is the record-holder and is the only swimmer with sub-4:10 experience.

This is Andrew Seliskar‘s second time holding the top seed from prelims in this event. Last year, Seliskar lost it to Jan Switowski in finals, but this year could be the year to change his destiny. Closely behind Seliskar are IU’s Vini Lanza, who won his heat in a pool record, and NC State’s Andreas Vazaios, 2018 runner-up.

Comparing the trio’s splits, Lanza was out fast in a 21.37 fly. The trio was even into the second half,but Vazaios had the strongest back split. Seliskar had one of the fastest breast splits of the entire event, splitting 28.52. Lanza brought his race home in 24.35, however, Seliskar took his race home in 24.68 versus Vazaios’ 24.74.

Tonight, the men’s 50 free will have a new name to be crowned. All but 7 men come into finals with sub-19 swims. Cal Bears Ryan Hoffer and Pawel Sendyk occupy the top 2 seeds from prelims, cracking the all-time top 10 times in the event. However, Cal’s momentum from day two prelims may not be enough for the uncertainty in this event.

Bowe Becker of Minnesota popped an 18.88, which is still off of his 18.69 PB. Harvard’s Dean Farris, who broke the 200 free AR last night, has also had an incredible start to his meet thus far and could be a big contender. Texas Longhorn Tate Jackson is on his road to redemption, making the A-final this year after failing to do so in 2018. You also can’t forget SEC champ Robert Howard, IU transfer Zach Apple, and NC State stud Justin Ress. This is a race you don’t want to miss.

The IU Hoosiers look to be on the path to defend their 2018 title in this event. The team redeemed themselves in prelims after a rather dry prelims session individual-scoring wise. Breaststroke powerhouse Ian Finnerty and transfer swimmer Zach Apple will certainly be major assets on the relay along with Gabriel Fantoni and Vini Lanza.

The race for second is down to the wire with nearly the rest of the field. The Louisville relays have come in strong as flyer Zach Harting pulled out a sub-45 split. The Texas Longhorns have produced an impressive freshman class, and rookie members Drew Kibler and Charlie Scheinfeld will also be crucial legs in this race.

Forgive me, Father Farris! I didn’t mean to miss your race yesterday oh Lord, thou art the Master of all things. This 50 free shall be yours.

No and Yes, respectively.