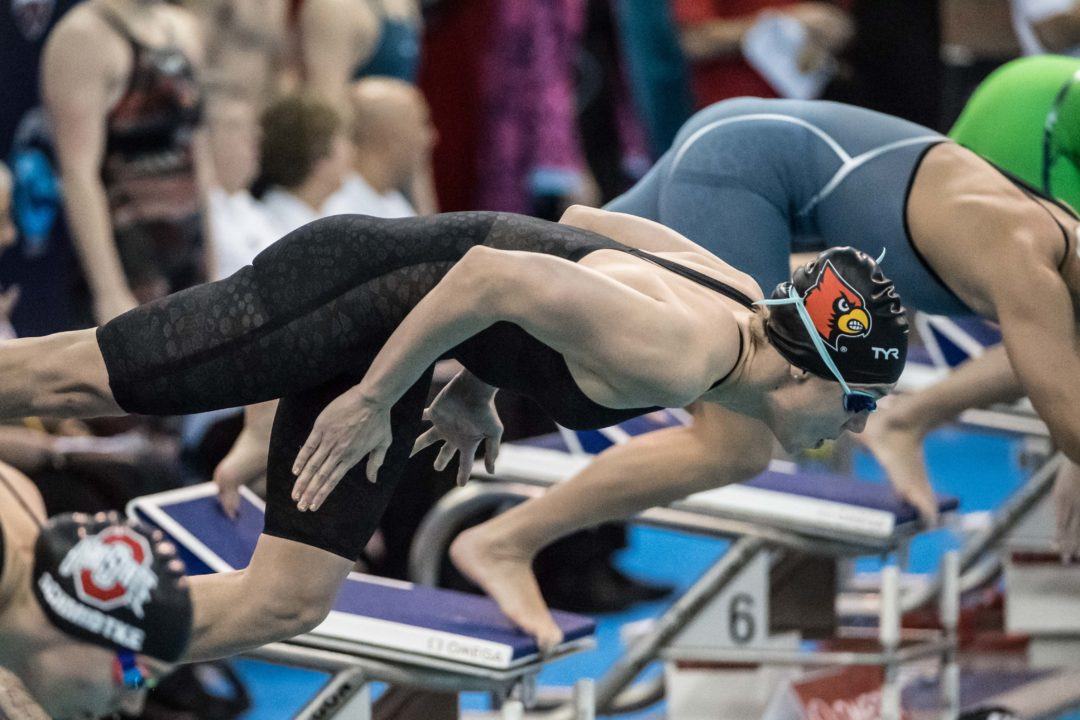 Mallory Comerford is one of four 4:35's coming into the 2018 NCAA Championships in the 500 free, behind Katie Ledecky's 4:26. Archive photo via Mike Lewis/Ola Vista Photography

There’s no stopping Katie Ledecky, the Stanford sophomore who will be up against her own NCAA, American, and U.S. Open record of 4:24.06 that she set at the 2017 NCAA Championships. She’s been as fast as 4:26.09 this season, a solid 8.9 seconds ahead of the next-fastest swimmer in the NCAA. Nobody is catching her in this race– like usual, it’s going to be Ledecky vs. the clock.

Things get a lot more interesting when looking past Ledecky, where the next sixteen swimmers are between 4:35.0 and 4:37.8. In total, 31 swimmers are entered with times under 4:40, which is notable considering only 17 swimmers actually broke 4:40 at NCAAs last year. Not everyone can match their seeds at NCAAs, but it looks like it will take a faster time to score this year in this event.

Michigan’s Rose Bi sits 2nd in the nation (4:35.02), with her teammate G Ryan at the 10th seed (4:37.37). Both Wolverines placed in the A final last year, along with this year’s 5th-seed, Mallory Comerford. The Louisville star has been 4:35.78 this season, a touch faster than the 4:36.16 she went at last year’s meet to take fourth. Also coming into the meet with A cuts, besides Ledecky, Bi, and Comerford, are Georgia freshman Courtney Harnish (4:35.69) and Texas junior Joanna Evans (4:35.05). Harnish has improved in her first season in Athens, while Evans is also experiencing a nice progression, and is representing a Texas program that has a lot of momentum going into this meet.

Dark horse: Indiana’s Kennedy Goss. Seeded down at 20th with a 4:38.48, Goss was 4:36.13 at NCAAs last year and took 3rd– another swim matching that time will probably get her into the A final this year.

Gotta love how Stanford has all those swimmers you mentioned, Katie Ledecky of course, and then still has a swimmer who would be ranked 2nd except isn’t even swimming it…

Evans is from The University of Texas

Goss had a big time drop at NCAAs last year in this event and she’s seeded with a faster time than she was last year. I think she’ll be top 8 for sure.

Last year though she was 8th in prelims and almost missed the A final. She then dropped a lot of time in finals. She needs to be faster in the morning if she wants to make it in to the A final this year since her time from last year’s prelims (4:38.09) is unlikely to make A final this year.

Last year Katie Ledecky was visibly unsatisfied with her 4:24.06 It is either she planned to be much faster or were just annoyed with this 0.06 sec . So this year we can expect this record to be broken. But actually by some unclear to me reason she is expected to improve all her personal bests: 200 should she lead off 800 relay, 500, 400IM and of course be under 15 min at mile race. My feeling is the 400IM is the priority and others race – as it happened.
People are trying to find some excitement in racing Ledecky against the field in the race where she is dominant. The most popular one if she manages to lap… Read more »

Katie Ledecky racing the clock again. And the rest of the field sort of paddling along behind her. Mallory has the most potential to swim close to 4:30.

KLhas more of a challenge in the 400 IM. I think Ella Eastin will adjust her strategy in the rematch. The winner will set a new NCAA and AR, maybe a 3:55.