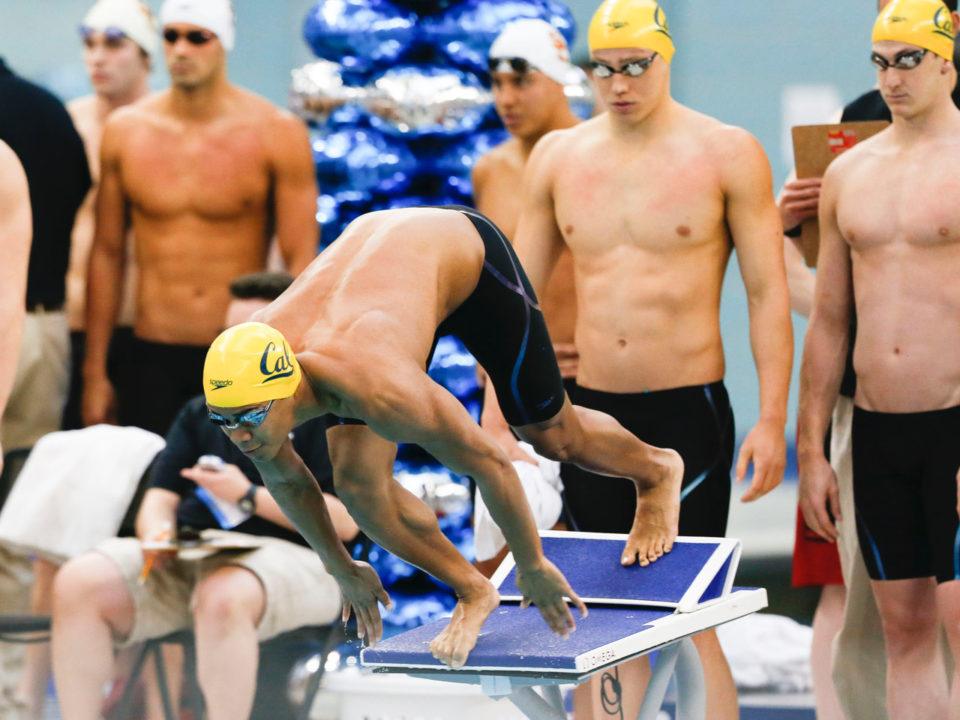 Cal could swap Justin Lynch to fly on the 400 medley relay, throwing in Ryan Hoffer or Michael Jensen as they seek to run down Indiana for the NCAA title. Current photo via Tim Binning/TheSwimPictures.com

Tonight is the most relay-heavy lineup of the NCAA Championships, with two relays in just five total swimming events. After this morning’s prelims, here’s a look at some of the relay lineup choices the top teams will face:

The Wolfpack went without stars Justin Ress and Ryan Held this morning and still sit second. It seems most likely the team will keep both off this relay to be able to attack national titles in the other three, but there are possibilities for the team to use one or both tonight.

Cal may have used its best lineup this morning, but still has some solid options at all four spots.

Can Molacek not swim all 5 relays?

He’d have to scratch either the 100 breast or 100 free. Certainly a possibility; he’s seeded awfully low in the breaststroke.

I think Cal might add Josa to the fly leg and Hoff to the Free. Josa has been 44.89 from a flat start at D2s a couple years ago. They have some crazy depth in this one. I think they could have had another group of 4 guys A final along with this one.

My memory from previous NCAAs isn’t great. Is this an unusually versatile sprint pack this year, or is every NCAAs like this?
Surely the Dressel factor adds a wee bit of drama by itself.

Obviously easy for me to say this sitting at my computer, but I’m going Seliskar in breast for Cal. After seeing the 51.1 at Pac-12s and what he’s done so far at this meet, he seems red hot. Staff will get to see how he looks again in the 2IM finals before deciding.

As we say in the asylum IT IS A NO-BRAINER. Good call Coach Mike!

If history is any indication, they are 100% team-first mentality, when it comes to swimming. (not to say other teams aren’t, just noting that seems to be a giant part of their culture & training at that school) So I have confidence that even if they don’t switch up the 400 MR lineup, they can still drop some time. They will be right between Cal and Indiana as well. The high energy tonight’s swims will bring is palpable.

If only we could all be there to witness the hype!!!

Hoping Izzo gets the 200 free relay swim for State! I am sure he’s not happy with his morning swim and unless he’s hurt, would love to see him get the chance to redeem himself. Would be good for his confidence in the rest of the meet.

You really think the coaches will put him on after a 20.0 flat start time?? Not happening.

Not saying they will or they should. But no way he didn’t race that time this morning without something being terribly off.