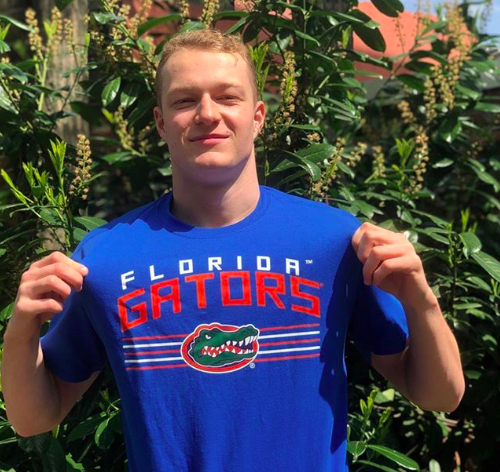 German butterflier Eric Friese has verbally committed to the Florida Gators. He was a finalist at the 2017 World Junior Championships in the 100 fly, placing 6th, while he was the 2018 German Open champion in both the 50 fly and 100 fly.

Proud to announce my verbal commitment to swim and study at the University of Florida. Thank you to my family, friends and everybody who supported me. Go Gators! 🐊

Friese looks to be most impactful as a sprint butterflier, but he has potential in sprint freestyle, too. His butterfly speed is a huge plus for a Florida team that just saw Maxime Rooney transfer to Texas. Rooney went 44.99 to place 4th in the 100 fly at NCAAs, making him the 4th-best performer in the event in Gator program history. He was also 41.74 in the 100 free and 19.43 in the 50 free last season, leaving him 2nd and 6th on UF’s all-time rankings.

At the SEC level, Friese’s converted times would’ve gotten him into the 100 fly A final. His fly times in long course are impressive (for a quick comparison, Rooney’s lifetime best in the 100m fly is a 52.28, not far ahead of Friese), and he looks like he’ll be an immediate contributor to the Gators and could take over as their medley butterflier.

Friese’s converted time in the 100 fly puts him right in line with Florida’s top swimmers in the event going into next season: rising sophomores Kacper Stokowski (45.72) and Will Davis (45.99).

based on those fly times, I’m going to guess they’ll be able to make him a relay threat at least for the 50-200 frees

Looks like a small recruiting class for Florida compared to the last few years.

Let’s see. Monster freshman class last year. Just a few graduating seniors opening up spots. First year under new rules with 2019 and 2020 being recruited in the same year. Maybe those factors are coming into play.

Last year Florida graduated one of the deadliest trios in ncaa history so of course they fell down the hill a little bit but with that considered they had a great season this year. They may be losing some of there stars but they still have depth and a lot of young talent. So I would say they are going uphill.

They have a class of 10 with Eric.
https://floridagators.com/news/2018/11/26/mens-swimming-diving-gators-sign-nine-to-2019-20-recruiting-class.aspx?path=swimmingdiving-men

you forgot Brendan Peacock in the class