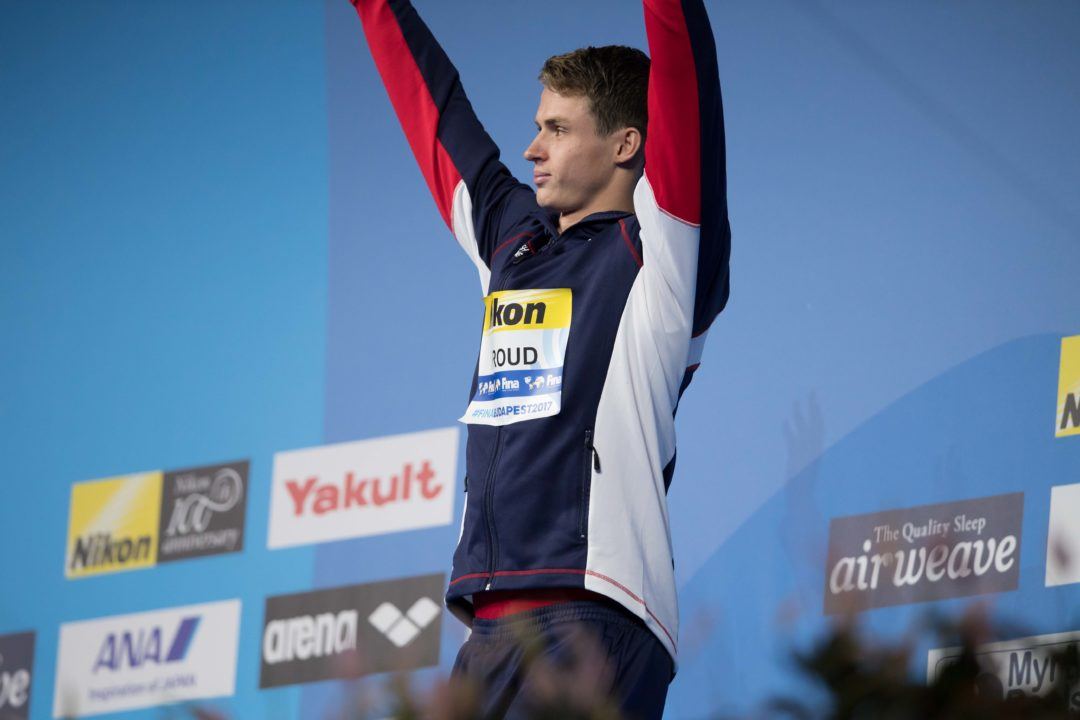 The 4th fastest 50m freestyler ever, Ben Proud, will try to lead Britain to a trio of victories in the men's sprint events at the European Championships. Archive photo via Mike Lewis/Ola Vista Photography

As with the women’s sprint events, there is a top-tier of athletes that always show up when looking at the men’s 50m, 100m and 200m freestyle. But, there are also plenty of seasoned veterans and rising stars among the mix so the big guns can’t afford to rest on their laurels.

Great Britain’s Ben Proud has proven he is the man to beat in the 50m free, crushing a new lifetime best and national record of 21.16 at this year’s Sette Colli.  That performance now ranks Proud as the 4th fastest performer in history. The 23-year-old Energy Standard athlete sits only behind world record holder Cesar Cielo and France’s Frederick Bousquet, who both went sub-21 with the super-suits, and American Caeleb Dressel, who swam the fastest textile time ever last summer to win World Championships gold in 21.15.

But Russia’s Vlad Morozov is hungry, already throwing down a near personal best of 21.47 in the 50m free at Russian nationals to stake his claim on a possible gold in Glasgow. The former USC standout finished just off the podium at last year’s World Championships, settling for 4th in another near best of 21.46. Just behind him in that Budapest final was 5th place finisher Pawel Juraszek of Poland.

Juraszek has stepped up his 50 free game, establishing a new personal best of 21.45 in Poland this year, marking just the 2nd time he has dipped under the 22 second threshold. That newness factor prompted me to put a couple of mainstays ahead of the Pole in the predictions, with Ukraine’s newly-minted 50m fly world record holder, Andrii Govorov looking good for 3rd, while Greece’s Mediterranean Games champion Kristian Gkolomeev should also be seen as a minor medal threat.

Although Govorov has only been 22.11 this year, the speedster finished with the silver back at the 2016 European Championships and has proven with his 2018 WR that the fast twitch fibers are primed to go.

The men’s 100m freestyle field contains 21 swimmers holding seed times under the 49-second threshold, led by Russia’s Morozov. In fact, the Russian carries Europe’s only sub-48 time into these Championships with the 47.75 he collected at Russian Nationals. The World Cup mainstay fell short of his goals at the 2017 World Championships, mustering just a 48.99 to find himself out of the semi-finals, so the 26-year-old will be seeking redemption in Glasgow.

Rivaling Morozov, however, will be GBR’s Duncan Scott, who has been as fast as 47.90, the British national record, and already threw down a speedy 48.02 this year to win gold ahead of Aussies Kyle Chalmers and Cameron McEvoy on their home turf at the Commonwealth Games. Having finaled in this 100m free event in Rio, Scott knows what it takes to try to shut down the field on the international stage. But, based on Morozov’s resume, Scott will most likely need a new personal best to rival the Russian in this 100m.

France’s Mehdy Metella and Hungary’s Nandor Nemeth both have been 48-low already this season, with Metella having notched a 2018 best of 48.42, while Nemeth was slightly faster in 48.31. Metalla took the bronze in this event at the 2017 World Championships in a time of 47.89, but hasn’t dipped beneath 48 since. Nemeth’s teammate Dominik Kozma may also be in the mix for minor medals, although he, too, has yet to venture into sub-48 second territory this season.

Of note, 2016 Olympic silver medalist in the 100m free, Pieter Timmers of Belgium, was originally entered in the event, but has had to withdraw due to illness. Also, dominant Russian freestyler Aleksandr Krasnykh is not competing here, as reported.

Serbia’s Velimir Stjepanovic was the 200m freestyle runner-up at the 2016 edition of these European Championships behind now-retired Dutchman Sebastian Verschuren, but he will have to put something special down to compete against the likes of British beasts Scott and 2015 world champion James Guy in the long sprint.

Scott’s and Guy’s best 200m free times fall just .02 apart from one another and Scott beat Guy both at the World Championships in Budapest, as well as at this year’s Commonwealth Games.

Mikhail Vekovishchev of Russia has already produced a 200m free personal best of 1:46.43 this year, ranking him 16th in the world, while his teammate, Mikhail Dovgalyuk, clocked a swift 1:46.49 also in 2018. Both can be contenders when less than 2 seconds separates the top 15 swimmers in this event.

I see Duncan Scott snaring at least one individual gold medal. I think he’ll be much better at home in Scotland than he was on the Gold Coast. I have him winning the 200 in my picks. I think he’ll medal in the 200IM too.

While I agree, he is seedes top 3 in both, so not sure it’s a “no way”. More very unlikely.

He’ll have to beat Morozov and Krasnykh

Sad to hear, but it’s true. Hope he can compensate in the 100

Or in the relays.