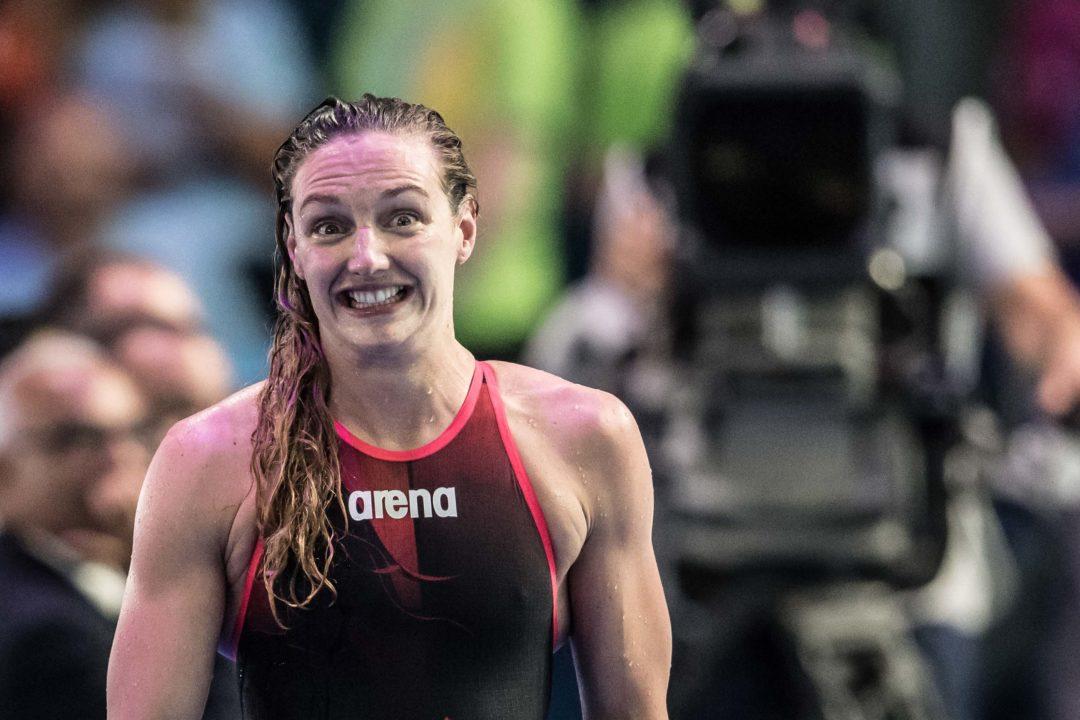 Hungarian star Katinka Hosszu will finally make her individual debut on day four of the 2018 European Aquatics Championships in Glasgow, competing in the heats of the women’s 100m backstroke.

Hosszu has taken on a much lighter schedule than usual at the Championships, most notably not entering the 400 IM, an event she had won three consecutive titles in.

She’s hit the water once so far, splitting 1:57.31 on the Hungarian mixed 800 free relay that placed 4th, and will swim her first individual race in the fifth and final heat of the 100 back on Monday morning. The 29-year-old enters the event as the top seed with her time of 58.80 from last summer’s World Championships, but only ranks 52nd in the world this year with a 2018 best of 1:00.70.

Hosszu has won the European LC title once this event, doing so in 2014, and was the silver medalist in 2016 to Denmark’s Mie Nielsen (who will swim beside her in her heat). She’s also the reigning Olympic champion in the event.

She’ll also be joined in heat 5 by Great Britain’s Georgia Davies, who is coming off a gold medal and European Record in the 50 back, and Anastasiia Fesikova, who won silver behind Davies and swam a lifetime best herself in the 50, will also be in action in heat 4.

Among the highlights will be Ukrainian Andrii Govorov swimming the 50 fly just over a month after he set the world record in Rome in a time of 22.27. Great Britain’s Ben Proud swam one of the fastest 50 freestylers ever at that same meet, and will look to challenge Govorov for the title in this event as the reigning World Champion.

Two years ago in London, Govorov won the title with Proud winning bronze and veteran Hungarian Laszlo Cseh was in for the silver. Cseh had a solid preliminary swim in the men’s 200 fly, but failed to advance out of the heats due to the times put up by Kristof Milak and Tamas Kenderesi (only two swimmers per-country can move past the heats, and Cseh was actually the 4th fastest Hungarian despite being 5th overall with Milak, Kenderesi and Bence Biczo ahead of him). He’ll swim alongside Govorov in the final heat here, and shouldn’t have any trouble advancing with Milak being the only other Hungarian in the field.

James Guy and Filippo Megli will go head-to-head in the first circle-seeded heat of the men’s 200 free, as will Duncan Scott and Jacob Heidtmann in the second. Those four were the only ones to split sub-1:46 on the men’s 800 free relay. Top seed coming in Danas Rapsys will look to make a statement out of the seventh and final heat (though he had a very pedestrian 1:49.36 lead-off on Lithuania’s 800 free relay in the prelims).

Yuliya Efimova will likely cruise through the women’s 200 breast heats after winning the 100 easily on night 3, as will Italian Simona Quadarella in the women’s mile after a dominant 800 win.

Tamas has a face too, not just a flag 🙁