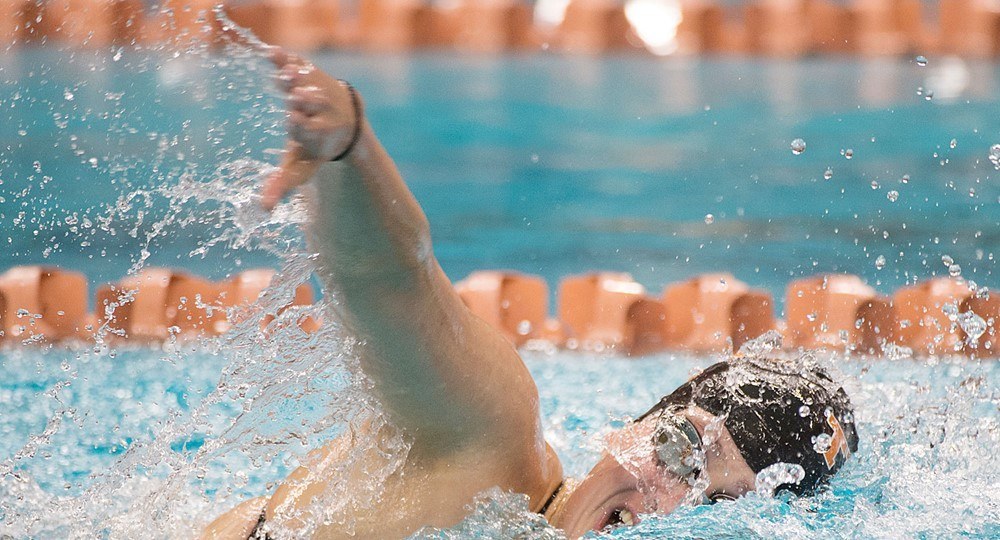 Joanna Evans of the Bahamas took her 2nd individual gold of the 2018 CAC Games, establishing a national record in the process. Archive photo via Texas Athletics

After putting up an impressive winning time in the women’s 100m breaststroke to capture gold on day 1, Jamaica’s Alia Atkinson was back in action on day 2 with another podium-topping performance.

Competing in the women’s 50m fly sprint, the 29-year-old busted out a new national record in the morning prelims, crushing a new personal best of 26.54 to take the top seed. In the final, Atkinson was just slightly slower, producing a mark of 26.60 to collect her 2nd gold of these Games. The veteran is proving to be in form at these Games, with several events yet to come.

Bahamian swimmer Joanna Evans also snagged her 2nd individual gold of these Games after winning the 400m free night 1. In the 200m freestyle race, Evans battled to the wall in a new Games Record time of 1:58.03 to beat out runner-up Elisabet Gomez of Cuba. Gomez was also under 1:59 in a silver medal-garnering effort of 1:58.55. Mexico’s Liliana Ibanez rounded out the top 3 in 2:01.36.

For Evans, the Texas Longhorn’s 1:58.03 checks-in not only as her own new personal best, but also as the new Bahamian national record. Her outing surpassed her own NR of 1:59.19 registered at the last World University Games in Taipei.

The men’s competition saw Games Records of its own in the form of Colombia’s Jorge Murillo in the 100m breaststroke. After watching Mexico’s Miguel De Lara throw down a new Games Record mark of 1:00.67 in the prelims, Valdes exacted revenge in the evening, cranking out an even quicker 1:00.37. He’s been as fast as 59.93, the national record he produced at the Rio Olympic Games.

Through 2 nights of competition in Barranquilla, the host nation of Colombia holds the top spot in the swimming medal table with 5 overall medals, 4 of them gold. Mexico is next with an impressive 15 medals overall, but just 2 golds, while Evans has put Bahamas on the board in 3rd with her 2 gold medals thus far. Jamaica is tied for 3rd with Atkinson’s efforts as well.